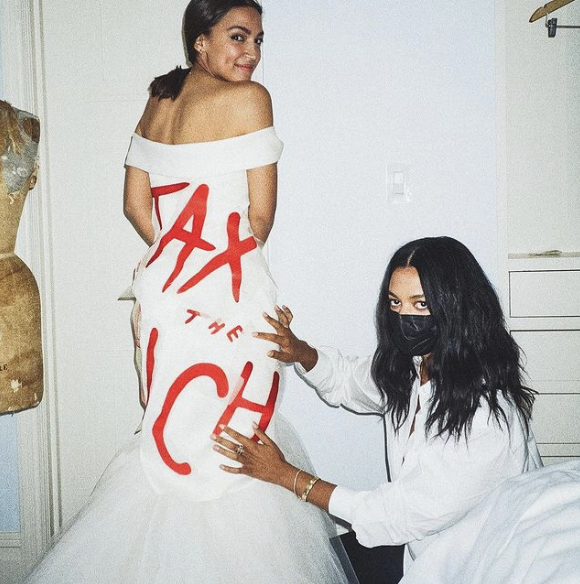 When Cher asked, “Can I hear a little commotion for the dress,” I’m not too sure if Alexandria Ocasio-Cortez’s Met Gala look was exactly what she had in mind. The question applies to this very controversial moment in fashion, nonetheless.

On Sept. 13, 2021, the annual Met Gala, a fundraising event in support of New York City’s Metropolitan Museum of Art, was held in its typical over-the-top manner. Known as “fashion’s biggest night out,” the Gala is attended by about as many A-list celebrities as can be packed into the building.

From Gigi Hadid to Kid Cudi, it always seems like anyone who is anyone can be found walking the steps in their themed couture each year. This time around, however, there were a few well-known faces that people hadn’t been anticipating. Faces including Alexandria Ocasio-Cortez, representative of New York’s 14th congressional district and one of the biggest names in current politics, particularly amongst those who identify with the progressive left.

In the days and weeks that follow the Met Gala, it’s not uncommon to hear people talk about the vast array of fashion moments that were seen on that night. Ocasio-Cortez was certainly one of the more talked about attendees, given her choice of attire.

Participating in this year’s theme, “In America: The Lexicon of Fashion” the outspoken member of congress showed up to her very first Met Gala appearance in a white, Brother Vellies off-the-shoulder gown designed by Aurora James, which donned the phrase, “TAX THE RICH” in bright crimson letters on the back.

In what was meant to be a serve in ethics and politics at one of the most overindulgent nights of the year, many people had a great deal of criticism for Ocasio-Cortez. And though taxing the rich is a sentiment that is generally agreed upon amongst the socialist-leftist crowd, most of that criticism came from that specific group.

“We all had a conversation about Taxing the Rich in front of the very people who lobby against it,” she explained on Instagram, “and punctured the 4th wall of excess and spectacle.”

While the idea of this dress felt well-intended, it also felt sort of apparent that wearing an expensive dress while attending an expensive event and brushing elbows with some wildly expensive people could be described as, in a word, insincere.

People were quick to identify this hypocrisy, also pointing out that her very attendance was concerning, given all she claims to stand for, and that the actual dress itself was nothing more than a preformative gesture.

The general consensus was that, instead of marching around telling rich people to tax the rich, she should do more to push for this sort of policy in congress. People argued that talk is cheap, and her actions are worth more than an appearance at an annual elitist gathering.

“If AOC cared about taxing the rich she would have protested the Met Gala, instead she joined the party,” stated Twitter user @thebradfordfile.

“My opinion on the AOC at [the] Met Gala thing is that the rich would not invite her if they actually felt she was a threat to their wealth and power,” said another user @KHAMCHANH.

Her presence and the dress aside (temporarily), the United States government has yet to make any substantial moves to increase taxes on the extremely wealthy. If Ocasio-Cortez were to actually put a policy of that nature into action, it would mean huge things for residents in the U.S., particularly for us university students.

According to an article published by the Nation, if the top 1% of Americans were taxed just 1% more, we would generate enough wealth annually to both be able to cover the tuition of all current and rising students and completely erase the national student debt that has been accumulated over the last decade.

On average, students in the U.S. leave school with approximately $40,000 in debt at least. The 99% would only need a 1% tax increase on the obscenely wealthy to alleviate all of this. It would change the lives of so many, and yet our government drags its feet, hemming and hawing over the potential repercussions of allowing people to live better lives.

So while I don’t think Ocasio-Cortez sat and deliberately plotted how to do the most while doing absolutely nothing at all, it makes a lot of sense that people feel a sense of betrayal and disgust over the fact that, instead of turning those numbers into a reality through policy, she decided to show up to a $30-thousand-per-ticket event just to throw the idea around.

It all goes to show that we need to expect more for our politicians and actually hold them accountable when they let us down. If Alexandria Ocasio-Cortez wants to wear dresses that encourage taxing the rich, it’s okay if we expect her to back that up by actually fighting for us to make that change.