A short story: The old man and the kid 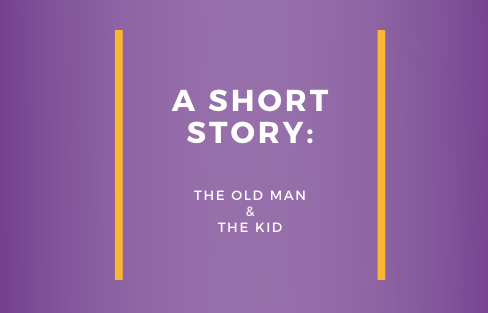 Maybe it was because I was naive, or possibly because I felt down on my luck, but I felt like I needed to get away from home. I had an intense urge to leave town to be alone for a while, maybe find a trail and follow it. I never knew it would lead me to my own salvation.

So, I started off on a well-defined road out of town and into the surrounding woods. After about an hour of walking, there came a crossroads, or at least what was left of one. On the right, the well-defined road turned into a well-traveled path. On the left, only a trail, except this trail was more like a suggestion of one. It was more akin to a thin, skewing patch that plants refused to grow on, rather than anything anyone ever set foot down on. Because my heart was still broken and I wanted to get away from society as much as possible during that time, I went left.

It wasn’t long before the trail became steeper, the foliage more sparse, and jagged stone replaced soft dirt. It felt like I was climbing a mountain, and I was. As the air thinned and chilled, the trail began to open up then disappear altogether. Where a trail would have been was covered by a gentle layer of snow, and ahead, the top of the mountain could be seen. Just before the top stood a small shack —  too small to be called a house, yet big enough to be called a home.

From it, a chimney spouting weak smoke could be seen, and an old man sitting on what could be mistaken for a porch. As I approached him, I could see the home had seen better days, and the old man even more so. Being upon him, he sat silent, and I stood observing. I could see the wisdom in his faint blue eyes, fed by the pain of experience.

I said nothing as he tilted his head in my direction.

He spoke simply: “Many will cross our paths, some will stay longer than others, but all will leave in the end.”

I was shaken, yet my heart stopped aching. He knew what I had been through, but I had no idea how. I was a statue as he turned his head away. I then quickly left back for the town.

A few weeks later, I found myself feeling poor on how I look, on what I had accomplished so far. I kept seeing everyone else in the streets, so successful, so unafraid to be themselves. I thought for a moment, then knew I had to see the old man again. Two hours later, I reached his home and, sure enough, he was sitting out front.

I came as close to him as I had before and waited.

He turned his worn face towards me and spoke sharply. “We are not other people, just as other people are not us.”

I listened intently, not questioning how he could know my inner struggles. He turned away, and I went back to town feeling surer of myself, no longer looking at others’ successes, but rather, working on my own. It felt like no more than a week had passed before I wanted to go see the old man again, to learn more of his wisdom, so I could become a better person. I left town to go back to the top of his mountain again, and before long I had arrived once more.

I saw his home, but he was nowhere to be seen. The weak smoke from the chimney was gone, and I worried. Upon approaching the wood structure for what would be my last time, I noticed the shambles of a door was cracked open. I shuffled inside to see him lying on his dusty bed. I came close to him, and without opening his eyes, his lips moved for the last time.

“I am still learning.”