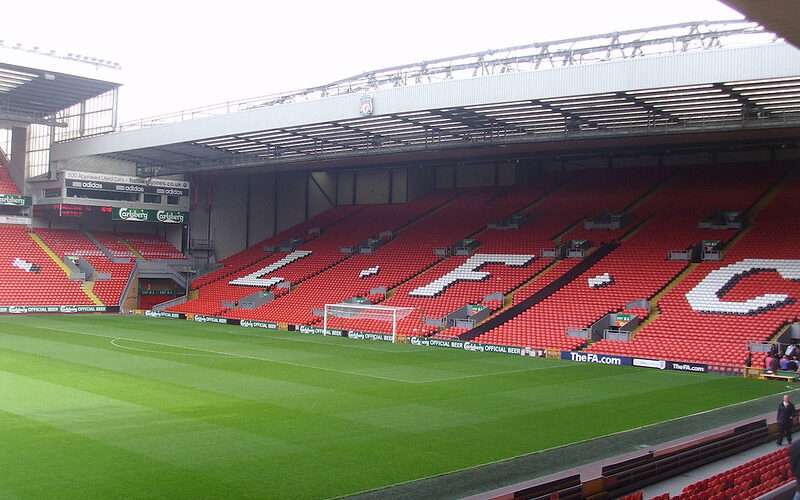 “Anfield” by Robbert Cutts is licensed under CC BY-SA 2.0

Football fans, we got quite a wild week two in store on this week’s fixtures! After last week’s crazy weekend matchups, this week marks the return of Manchester United and Manchester City from their time off after the Champions League, attempting to strike once again for another Manchester Premier League winning season, whether it’d be in City or their derby rivals, United.

After the previous Monday matchups, on Saturday, Sept. 19, there are four fantastic matches to tip off the weekend. Starting bright and early, West Bromwich Albion returns to Goodison Park in Merseyside to face Everton at 7:30 a.m., while right in the prime morning slot for the day is Fulham going to Leeds to face Leeds United. Later that day, we’ve got the first 2020–2021 Premier match at Old Trafford, as Crystal Palace walks into the lion’s den against Manchester United at 12:30 p.m. For the final outing on the Saturday card, we have the red-hot Arsenal against West Ham United in the Gunner’s den, Emirates Stadium. Now… to talk about football is one thing, but to play it in practical title matchups is another.

The Sunday card consists of four more great matches, as it starts off with the Tottenham Hotspurs, who travel to Southampton to take on Southampton FC, bright and early at 7 a.m.  once more. At 9 a.m., Brighton and Hove Albion goes to St. James Park to take on Newcastle United, and lastly in the prime morning slot at 11 a.m., we have the defending champions Liverpool travel to Stamford Bridge in London to face the blues of Chelsea. Last season, Chelsea’s defeat in Anfield back in July brought heated tensions with managers Frank Lampard and Jürgen Klopp, just as Chelsea tried to ruin the new champion’s celebration, ending in a 5–3 defeat at the final match at Anfield for the 2019-2020 season. This will bring about massive hype, with players such as American Christian Pulisic on Chelsea and Liverpool’s Mo Salah leading the charge in this season’s beginnings. Lastly, for Sunday’s matchup, Burnley travels to Leicester City, trying to steal three key early points away from the Foxes to run into the top four of the standings. For the week’s finale, on Monday, Sept. 21, there are two matchups later in the day. It begins at 1 p.m. with Aston Villa against Sheffield and ends with yet another marquee matchup as Manchester City makes their season debut after a devastating loss in the Champion’s League to Lyon to take vengeance against the Wolves at 8:15 p.m.

This week’s matchups have the potential to set the standard for this year’s standings, as Arsenal, Chelsea and Liverpool look to cement their top four statuses early on in the weekend, while Man City and United also look to do the very same thing. Meanwhile, teams such as Fulham, the Wolves and West Ham have the chance to disrupt the “norm” in the Premiership, perhaps cementing their spots as permanent disruptors and early contenders to the top teams in the league. Make sure to check out this week’s matches on the networks of NBCSports and others as the Premier League continues to return to full form!

Jeff Babcock is a fourth-year student majoring in communications and minoring in journalism. JB884128@wcupa.edu