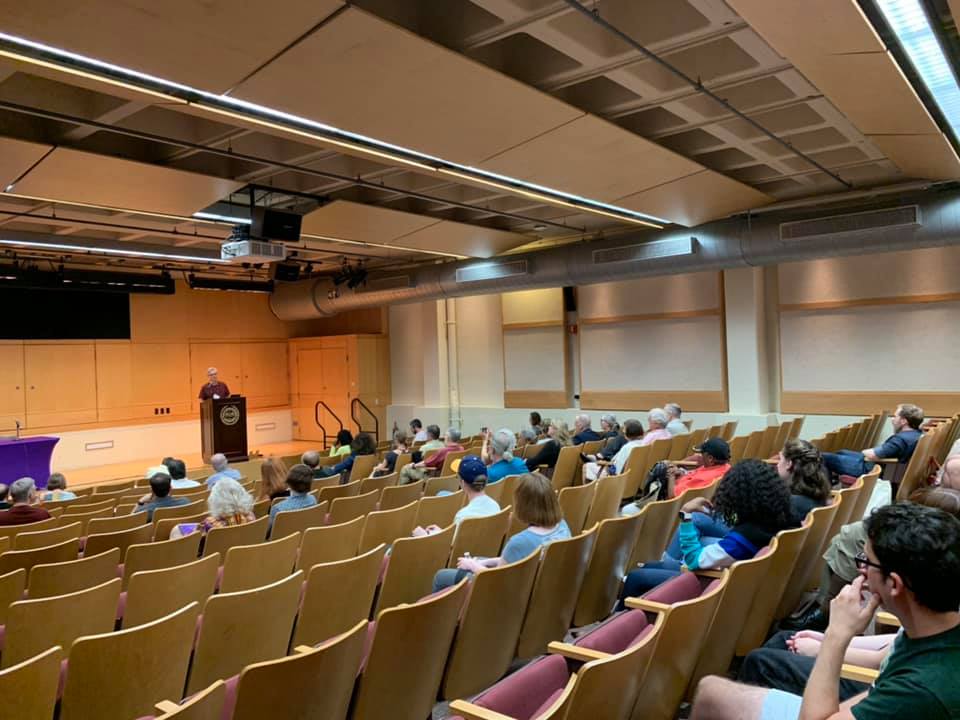 People might know West Chester University by name due to its strong education program and successful marching band, but West Chester is famous for a poetry conference as well— fun fact: West Chester’s Wikipedia bio includes info about the conference.

The poetry conference, concerned with formal poetry, started on campus in 1995 during a time when formalism was largely being overlooked. The conference’s focus on form, prosody and craft has attracted poets and scholars from all over the country, making West Chester the nation’s premier poetry conference destination. This year marks the 20th anniversary of the conference, which is now being held in April instead of during the summer, allowing more students to attend, and attend at a discounted rate.

Jesse Walters took over as director of West Chester’s Poetry Center and conference in 2018. In an interview about the Poetry Center and conference, he said, “[It] is a resource I’ve always been aware of as a poet, and its reputation in the poetry community has always been top notch. When I was offered the opportunity to be part of its future vision, I jumped at the chance.” During his time as director, Walters has worked towards cutting the cost of the conference for attendees, down by over 50%, allowing all kinds of people interested in poetry to attend.

While the theme of the 2019 conference was “Setting out for the Sublime: Voice, Verse & Craft,” this year’s theme, marking the 20th conference held at West Chester, is “Form, Flight and Ferocity.” Walters said the theme was inspired by the works of conference keynote speaker, Molly Peacock, award-winning poet and author of seven books. According to Walters, “Molly Peacock is truly the voice of flight and ferocity! Her work is both accessible and vibrant, absolutely readable while literally taking your breath away. She will offer a special one-day workshop, while a variety of other poets will offer workshops for all sorts of poets.”

The conference will be running from April 2-4 with a special event for teachers on the fifth. Attendees should expect various panels, presentations, workshops and readings throughout the four days, including an open mic night for anyone interested in sharing poetry. On the first night, Molly Peacock will share her keynote reading in the Ware auditorium in Swope; students are invited to attend. Other presenters and workshop leaders to expect include Annie Finch, George Green, Juliana Gray, Susan de Sola, Shirley Geok-lin Lim and Kaveh Akbar. They will be hosting workshops ranging in topic from feminine voice to sonnets to ekphrastic poems.

According to Walters, attendees should expect “a really good time! Whether you’re a professional writing major here at the University obsessed with poetry or an occupational therapy major who can’t remember the last time they read a poem, there’s something here for everyone. The workshops provide an intimate, casual experience with some of the most talented poets writing today, and the scholarly presentations are simply fascinating explorations of art and the written word. As a special addition this year, our incredible art students and faculty will be offering open studio hours as well as slideshow discussions of their work. In the first week of April, when the semester is starting to reach its boiling point, taking a load off and sharing some fantastic creativity is just the shot in the arm we all may need.”

Do not be dismayed if you are new to poetry and are nervous about attending the conference. The events are very relaxed settings, allowing for a creative and memorable experience. You will rub shoulders with accomplished poets and scholars, learning from them and making connections. In terms of preparations for the conference, Walters advises a Google search, “Take a look at the faculty who are offering workshops, and simply give them a Google. Read some of their poems, and I think you’ll find words and ideas that are very accessible and thought-provoking.”

Attendees outside of West Chester should expect to pay about $500 to attend, though West Chester students have the opportunity to participate at a significantly discounted rate. Interested undergraduate or graduate students can attend everything except for the workshops for free though they initially are required to put down a $49 deposit, which will be refunded at the end of the conference. To ensure a refund, students’ attendance must be recorded by conference personnel. To attend the workshops, students must put down a $99 deposit, $50 of which will be refunded. Students can register online and should contact Cyndy Pilla in the College of Arts and Humanities with any registration problems.

Maria Marabito is a third-year English major with a minor in literatures and diverse cultures. MM883631@wcupa.edu