Prismatic fashion inspired by the American Art Movement: now at the Philadelphia Museum of Art 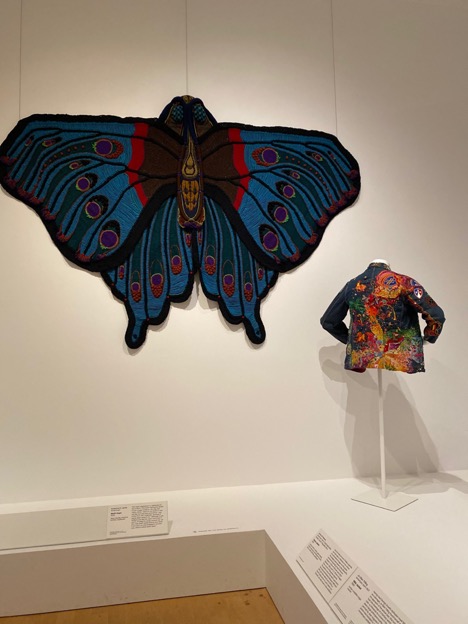 Come one, come all! The Philadelphia Museum of Art presents “Off the Wall: American Art to Wear,” from Nov. 10 to May 17, 2020. The 1960s were a time comprised of calamity, from the assassinations of President John F. Kennedy and Dr. Martin Luther King Jr to the Vietnam war. The late ‘60s initiated the emergence of the American art movement, which grew into the decades following; specifically, the years 1967 to 1997. Artists during this time geared themes toward their respective decades’ cultural and social concerns. The exhibit is organized into nine sections named after music that was prominent in the ‘60s and ‘70s. Some, I believe, are especially worth noting more than others in means of personal “eye candy.”

The first section, “The Times They Are A Changin’” (Bob Dylan, 1964), encompasses artists’ transitions from tapestry form to sculptural designs, and eventually clothing. An abundance of crocheted kimonos is displayed in this section, many including vivid colored floral designs. Artists’ work displayed in this portion of the exhibit describe their work as, “wearable sculpture”; wearing art is a movement in itself.

The late ‘60s initiated the emergence of the American art movement, which grew into the decades following…

“In A Land Called Fantasy” (Earth, Wind & Fire, 1977), the fourth section, dives into the worlds of science-fiction and fantasy; these worlds provide an escape form of the 70s rash political upheaval. An upstanding piece in this section is Susanna Lewis’s “Moth Cape,” 1979. The cape is a vibrant and symmetrical item that dons aquamarine with what seems to be Peacock stitching veering in each wing. The moth’s large blue eyes and brown head appears to be the hood of the cape. According to museum records, Lewis is said to have had a nightmare of being wrapped in a giant moth, leading to her inspiration for the cape. To be completely honest, Lewis’ line of lepidopteran capes or kimonos would be immensely appreciated.

From 1971, Helen Reddy leads the sixth section titled: “I Am Woman.” Feminism is indirectly adorned within these pieces from the early 1970s. The buttoned sweater “Flamingo,” 1982, by Janet Lipkin, evokes the idea of the flamboyant structure of the bird. Long and semi-pointy “wing like” fabric lays over the sleeves. The sweater’s collar is broad, maybe to suggest wingspan of a flamingo. The piece in itself sets as “curvy” on the mannequin, perhaps alluding to a common perception of femininity. While I believe this design is fashionable, I’m surprised to see the lack of pink represented to associate with a flamingo. It could be possible that Lipkin steered away from the common thought that flamingos are pink, when in reality their color changes due to their shrimp diet. Overall, the fit of this piece seems practical and would pair well with black leggings.

Additionally, in this section is “Medusa Mask,” 1975, by Nicki Hitz Edson. The mask is fully sewn in wool. The emotion of Medusa is her emotions at the end of her marriage. The piece can be quite frightening at first glance, but certainly not R-rated. Edson used mainly blue, dark brown and tan wool. The wrinkles on Medusa’s face are carefully done, as well as the dark circles around her monster eyes. As for the snakes, Edson must have used thick wires under the wool to curve them. This mask would sure have guests turn to stone at a costume contest!

The seventh section is led by rock band, Chicago, 1970; the title should sound familiar, “Colour My World.” Conveniently, it’s all about the color spectrum. Along with color, typography is also a theme throughout this section. Susanna Lewis stuns spectators yet again with her cape, “Off We Go into the Wild Blue Yonder,” 1977. Sound familiar? The title is a lyric from the United States Air Force anthem, which is also typed along the cape’s border. The back of the cape depicts a flight scene, while the front contains the blue sky with clouds and stars.  A peep of universe is also visible, above the clouds. This piece is a salute to the Air Force, as well as a patriotic design of the vast atmosphere just above our heads. I obtain euphoria every time I come across astronomical settings, since it confirms the knowledge that humans are aligned with an entire universe.

Tim Harding’s “Garden: Field of Flowers,” 1991, is a quilted coat encapsulating the rainbow color spectrum. The bottom left corner of the coat begins with what appears to be, white daffodils. Following the daffodils are violet, pink, red and yellow flowers. As the flowers run deeper into the coat, Harding seems to have retired to colorful brush strokes. The brush stroked plants are a far distance, perhaps Harding was trying to recreate how humans may view distance of a field of flowers. Afterall, when we gaze into a vast landscape, dots of color are about as clear as they come.

Want to see more? Spend your weekend at The Philadelphia Museum of Art, and collect your thoughts through the language of American art. More information can be found at philamuseum.org.

Madison Starinieri is a third-year student majoring in English and special education. MS882527@wcupa.edu.