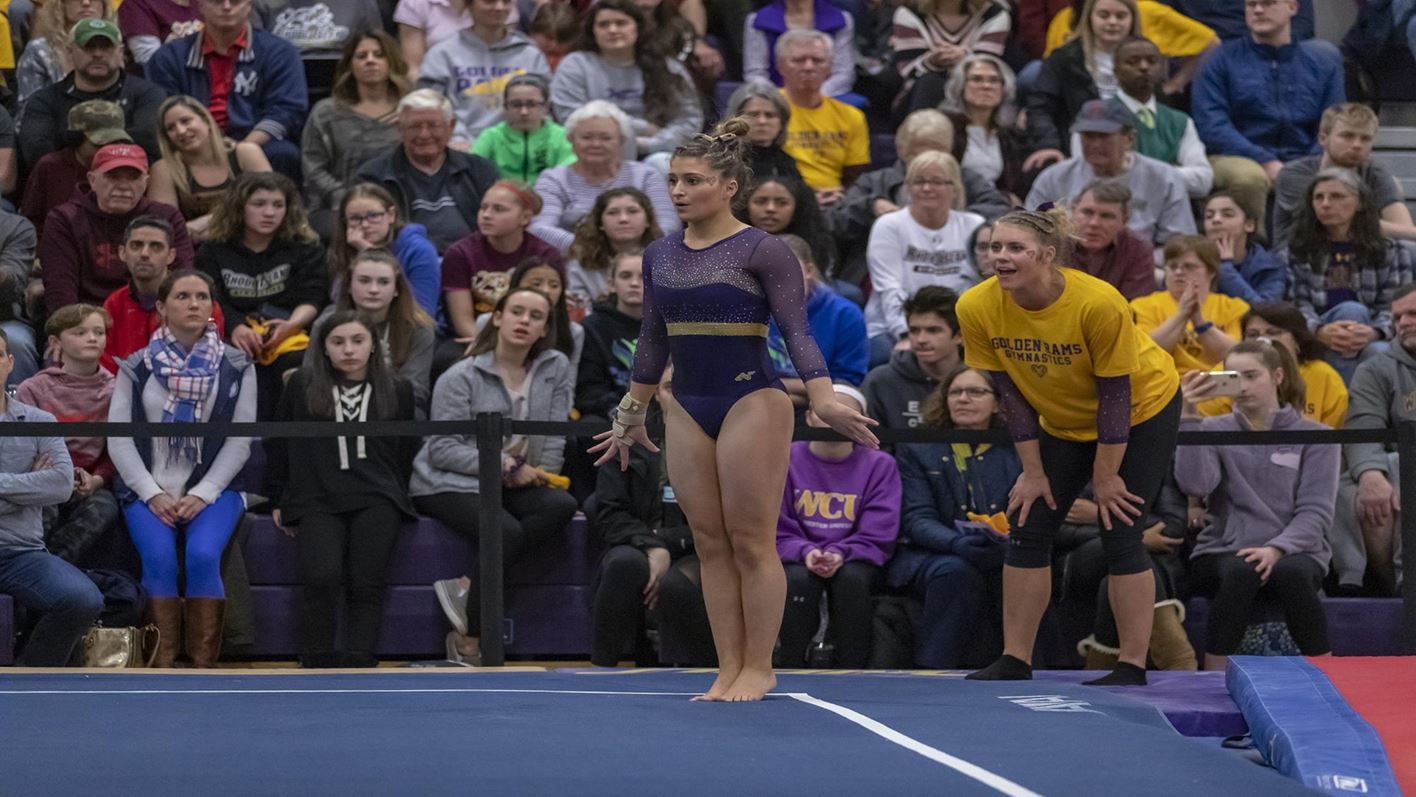 The West Chester University gymnastics team started their season on Jan. 11, 2020 in Boston Massachusetts. They took on The University of Maryland and George Washington University at The Little Boston Invitational. The team broke the school record for the highest scoring season opener with a 193.25, placing them in first place in the USAG Division for the first week of the competition. This meet was hosted by senior Jordan Miranda’s home town gym. After a stellar meet, Miranda stated,

“I was so blessed to get to start off the season back at home. The meet was hosted by my home gym, so it honestly felt like a dream come true to be back where I started gymnastics 17 years ago.” Miranda continued, “The meet was packed with lots of energy. We were all just so excited to be competing again. I think that is why we did so well because everyone just went out there and had fun. That energy is contagious! Breaking the school record of the first meet was an incredible way to start the season. I couldn’t have asked for anything more as a senior. I cannot wait to continue to grow and dominate with this team.”

The Golden Rams were named the home team for the night, so they started on the vault exercise. Second year, Annie Bailey, started the event off with a breathtaking yurchenko layout to a stick. This truly was the start of the fire underneath The Golden Rams, and they never let the flame burn out. She was followed by third year, Kelley Lubking, who also had a beautiful front handspring front. Following her, second year McKenna Kissinger scored her career high 9.65. Fourth on the event was second year, Brashlyn Johnson, who made an appearance in line up for the first time since her ACL surgery last May. Following her, third year Jessica Meakim posted a 9.75, and first year Kiah Johnson finalized the event with an impressive debut of a 9.8. Senior, Sydne Powers exhibitioned the event beautifully and stated, “It was a great feeling. I knew we were doing well at the meet, however I did not know how high the final score was. As my last year, this is definitely the way I wanted to start season off. We all have worked so hard from over the summer through pre-season to now, and even though we have more work to do, I’m glad we got to see how the hard work pays off. We laid down a strong foundation and now all we have to do is keep building.”

Moving onto the uneven bars, The Golden Rams continued the momentum, and they kept fighting throughout the meet. Two first year gymnasts, Sam Kelly and Sammie Gill, made their college debut on the uneven bars and handled it very well. Miranda and Meakim also had impressive starts to their season on the uneven bars. Third year, Yoli Nodarse scored an impressive 9.6, and third year Melanie Wojewoda anchored the event with a beautiful routine scoring a 9.775.

On the balance beam, Wojewoda, Miranda, and Meakim led off the event very solid. Third year Rose Fanara scored her career high 9.725 on the event. Nodarse had an impressive and solid routine, and she was followed by senior, Sarah Boyd who posted a 9.8 on the event.

Finishing up on the floor exercise, Miranda, Kelly, Kiah Johnson, Kissinger, Fanara and Meakim finalized the meet flawlessly. They fought until the very end, and they closed the meet phenomenally. Meakim tied for first on the event.

Boyd took ECAC Specialist of the Week for the second week in a row, and Nodarse claimed herself the ECAC Coaches Choice award.

The Golden Rams also competed at Towson University on Jan. 17 against William & Mary and Cornell University. They did not have as strong of a meet as the first week, but they still put out a strong competition placing them third in the meet. Some highlights include Boyd tying for second on the balance beam with a 9.8, Wojewoda placing third on the uneven bars with a 9.75 and Meakim taking first place in the all-around with her career high 38.9 score. After strong performances at this meet as well, Boyd took ECAC Specialist of the Week for the second week in a row, and Nodarse claimed herself the ECAC Coaches Choice award. The Golden Rams will head to Ursinus College Jan. 26 for their next meet of the season, and their home opener will be Feb. 1.