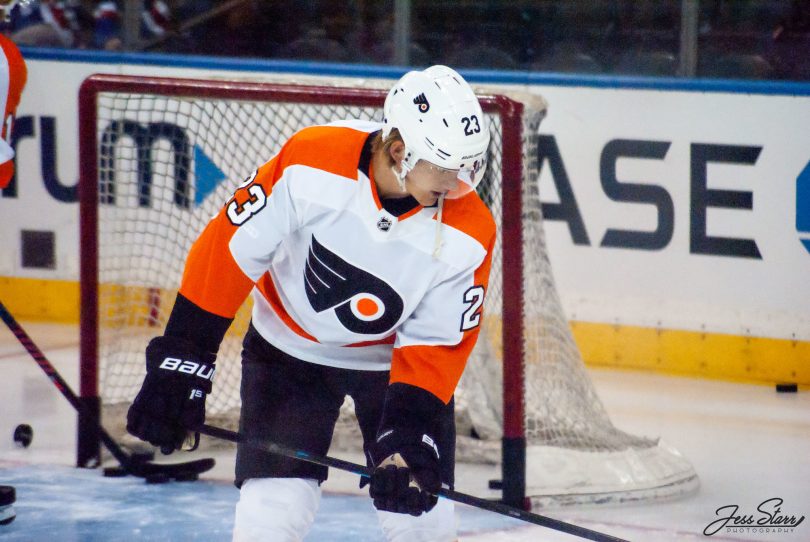 The Flyers hosted their rivals from the nation’s capital on this week’s Wednesday Night Rivalry Night, with the game being broadcasted nationally. The crowd at Wells Fargo Center was quieted six minutes into the first period when Brendan Leipsic scored off of a rebound from a point shot from John Carlson.

There wouldn’t be another goal until the third period, but this game had a feel of major importance even this early into the season. The game was back and forth, with great crowd involvement making the feel one of a playoff atmosphere.

Around six and a half minutes into the third period, speedy winger Jake Voracek weaved his way from the boards into a two-on-one and placed a great saucer pass onto the stick of Claude Giroux. He made no mistake putting the pass home and the game was tied. This was a prime example of what Jake Voracek at his best looks like, and that is why there is annoyance among the fanbase with his inconsistency.

Nevertheless, Voracek played a good game and it earned him a promotion onto a line with rookie Joel Farabee and captain Giroux Friday against the senators. The game went into overtime (what a surprise) and subsequently a shootout. The capitals scored their first two attempts, eventually taking the shootout win. Still, the Flyers played a great game and showed they could hang with one of the premier teams in the eastern conference and the NHL as a whole.

The Flyers traveled to Ottawa to face the Senators two days later. The fly guys came out in fire, James van Riemsdyk dangled goaltender Anders Nilsson and had him beat but hit the crossbar. Moments later, JVR has the puck with Nilsson sprawled on the ice and saw his shot get swatted away by the goalie’s glove.

It was a fourth liner for the Flyers who broke the ice, as Tyler Pitlick sniped a goal short side to take a 1-0 lead. Carter Hart continued his strong play shutting the Senators out in the first period.

This would not extend past the second period, as the Senators scores two goals in a span of four minutes. The second was one for Hart to forget, as it squeaked through him as he was coming off of the post.

It is worthy to note that the Senators could have had a way larger lead in the game, as they missed multiple empty net opportunities. The two most prominent coming from recently returning Logan Brown and New Jersey native Bobby Ryan.

The third period did not bring good results for the Flyers. The orange and black could not seem to set up in their offensive zone, and when they produced opportunities Nilsson was very sharp. The Flyers were presented with an opportunity when Shayne Gostisbhere was high-sticked, resulting in a four minute powerplay. The Flyers could not set find a way to set up until the tail end of the man advantage, but that also happened to be the end of the game. The result was a bad loss to a lesser foe after playing a great opponent very well, something Flyers fans have seen all too often the past five or so seasons.

They had an opportunity to redeem themselves in the second of yet another back-to-back at home against the New York Islanders. The 13-3-1 Islanders.

Brian Elliot got the start in this one, giving Carter Hart a deserved rest after two great games. The Flyers got off to a great start, having great success cycling the puck in the offensive zone. Sean Couturier scored a minute and a half into the game off of a sweet feed from Oskar Lindblom. Flyers defenseman Ivan Provorov quickly stood out in this one, commanding the back end and looking more confident. He happened to also draw an Islander penalty at the end of the first period, and then proceeded to score a one-time laser into the top shelf. It was Provorov’s best period of the season, giving the Flyers an insurance goal to finish it off. As Flyers broadcaster Keith Jones stated, “The Islanders came out (of the first period) with their pants on fire.” They completely flipped the script off the game with a way better second period. Even so, the young players of Farabee and Lindblom connected to give Lindblom his ninth goal of the season.

With a goal against the run of play (the Islanders outshot the Flyers 13-4 in the period) the Flyers looked to close them out in the third. The Islanders made it a game again around eight minutes in, cutting the lead to two goals. The Islanders received a powerplay and were really passing the puck well, the Flyers found themselves scrambling more often then one would prefer. One sequence found Elliott out of position and an empty net for the Islanders. Provorov and Matt Niskanen slid into the shooting lane, preventing a would-be goal. Sadly, young stud Matthew Barzal would score on the same powerplay cutting the lead to one.

Four minutes later, an Islander backhander bounced around under Elliott and crossed the goal line, tying the game with two minutes left and leaving the home fans very irritated. At this point the game was a catastrophe, and the game entered overtime yet again. Under 10 seconds left in the extra frame, Konecny skated down the wing on a two-on-one opportunity. The defenseman skated towards the other Flyer and Konecny had a wide open shot and could’ve even skated in closer. He chose to pass, probably one of the most frustrating moments of the season for me.

The game entered a shootout, and the Islanders scored their first two shots, compliments of Jordan Eberle and Matthew Barzal. The Flyers potted no goals, dropping a point after having a 3-0 lead entering the third period. A disappointing back-to-back to be sure, claiming one of a possible four points.

Last week, I stated if the Flyers kept playing at the level they were performing they would be in the playoffs. However, multiple key flyers players find themselves in lengthy goal droughts. JVR, new signing Kevin Hayes and Voracek find themselves struggling to score. JVR specially seems to be snake bitten.