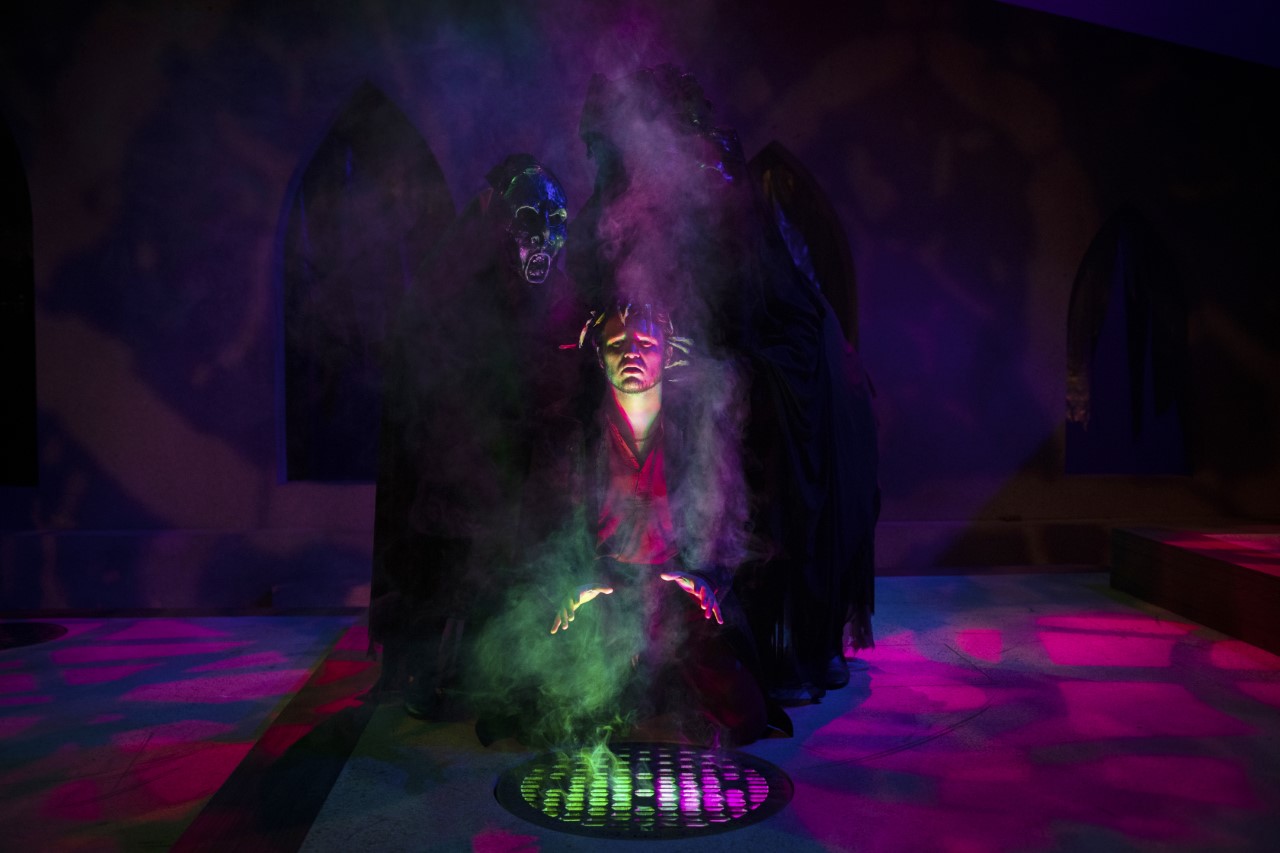 West Chester University’s theatre productions have never disappointed me, and it doesn’t look like they will start to do so anytime soon. The latest production—William Shakespeare’s “Macbeth”—combines the Bard’s “honey-tongued” wordplay with a colorful heavy-metal aesthetic, and the result is an explosive tale of ambition and paranoia.

I admit that I judge Shakespearean productions by harsher standards than I do other performances. Like many people, I find something special in Shakespeare’s writing—a magic that fully justifies his status in the Western tradition. I thus entered the Madeleine Wing Adler theatre cautiously optimistic. As is typically the case with West Chester productions, the main part of the set was left exposed while the audiences found their way in—and its design gave me a pretty accurate idea of the play’s overall tone.

The set presents a building like those in “The Cabinet of Dr. Caligari,” and behind it stands a fire-shaped cutout that changes colors to reflect the drama’s changing moods. The mise-en-scène is then completed by smoke effects, rising platforms, lights (sometimes pointed directly at the viewers’ eyes) and uncanny projections — all of which come together to bring out the spookiness inherent in “Macbeth’s” script. The play made the greatest use of these resources during Macbeth’s (Alex Harding) encounters with the three witches (Sab Sinsel, Chloé Hyde and Clare McKernan). These scenes felt appropriately horror-esque in time for the Halloween season. Further, it seemed that the supernatural portrayal of the witches made clear this rendition’s stance on the question of agency in this play; the weird sisters did have higher powers and affected events to an extent.

As for the acting, the cast did a fantastic job. Everyone on stage generally commanded Shakespeare’s demanding language with relative ease and released its full power in the play’s most climactic moments. A standout in that respect was Lady Macbeth’s (Grace Eshenower) “The raven himself is hoarse” monologue in act one, scene five. Besides the language, the physical acting also added much to the experience of watching this production. One especially powerful — and harrowing — scene was that in which the Macduff castle is invaded and Lady Macduff (April Marion) and her children (Enzo Bellomo) are murdered.

Also, at certain moments, the production cleverly adds to Shakespeare’s original script by implementing physical acting during scenes that were originally meant to only include dialogue. Most prominently, the dialogue of act one, scene two is turned to voiceover that we hear as we see the events narrated. One final thing to note about the acting is the fierce choreography of the fight scenes, which were exciting and more frequent and lasting that I anticipated. The beheading of Macbeth was especially grotesque, and the angle made it rather convincing.

All in all, West Chester’s ‘Macbeth’ is fantastic, and I recommend it.

I have only one negative criticism. However, it is not a criticism of the production itself, but of parts of its audience. I noticed more unnecessary noise from the viewers in this production than I did in any of last year’s productions, and I have no clue why. Overall, there wasn’t enough chatter to significantly affect my experience, but when it occurred during particularly important scenes or resonant monologues — and especially when scenes that were clearly not meant to engender laughter did — I was unhappy. Perhaps I sat at an unfortunate spot, or maybe I am just being a buzzkill. Either way, I feel that it is important to remind everyone of the importance of paying cultural events like dramatic performances the respect that they’re due.

All in all, West Chester’s “Macbeth” is fantastic, and I recommend it. If you’re interested in this heavy-metal rendition of “The Scottish Play,” you can see it at 7:30 P.M. on Friday, Oct. 18 or Saturday, Oct. 19. Tickets cost $12 and are available at http://wcupatix.com/theatreanddance. The play is performed with no intermission.