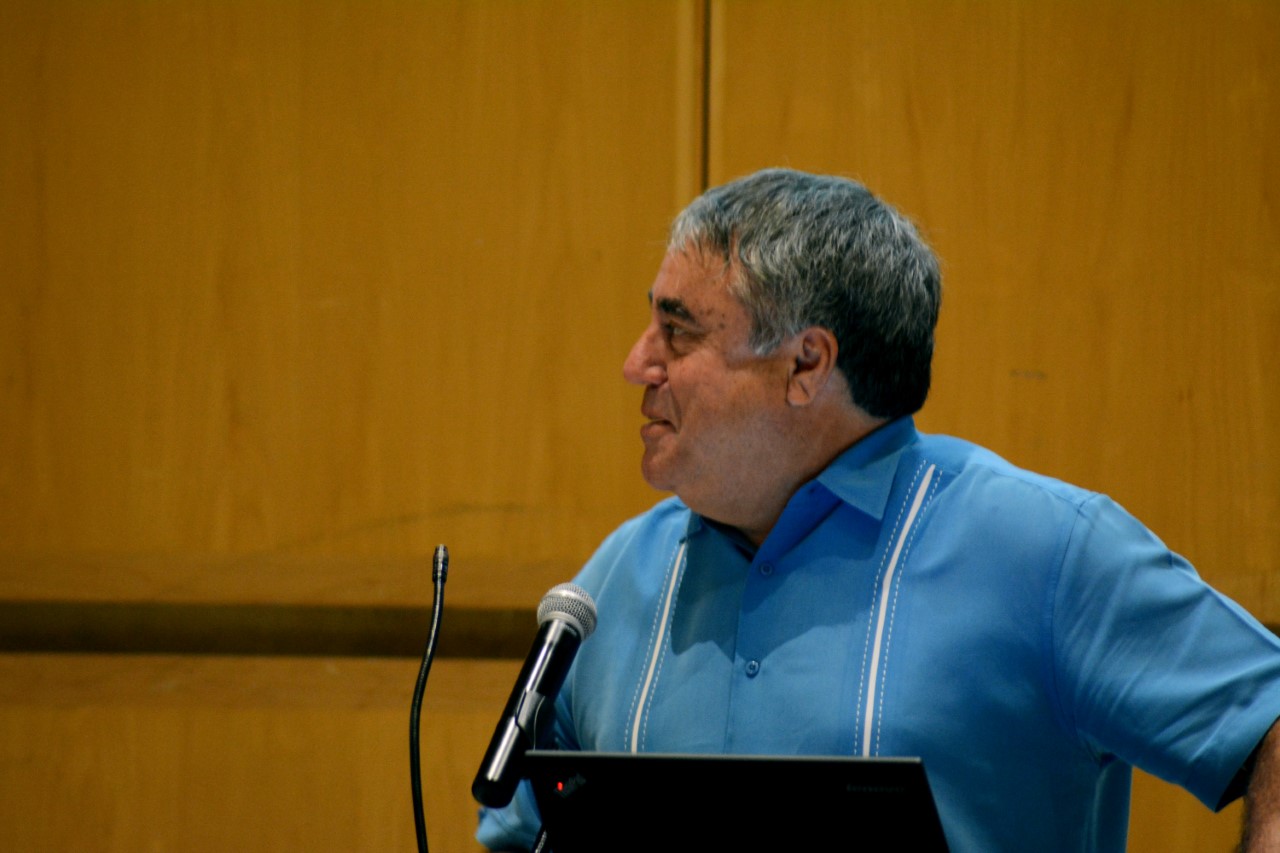 In a bold amplification of Latino voices and community, the 11th Annual Latina/o Communities Conference featured keynote speaker Enrique Morones on Thursday, Sept. 26 at 12 p.m. in the Sykes Student Union ballroom. Morones’ powerful speech on immigration, community and his non-profit organization “Border Angels” reminded attendees of the importance of coming together and advocating for others in a time of hostile politics and anti-Latina/o sentiment in the United States.

The conference, which began Wednesday, Sept. 25 and lasted until Thursday, Sept. 27, brought together scholars, teachers, professors, college students and high schoolers alike. During the luncheon that featured Morones, attendees could be found salsa dancing and enjoying authentic Latina/o food and drink from the local restaurant Dos Amores. The energy in the crowd was inspiring as others conversed in English and Spanish alike.

Morones began with a moment of silence for the over 11,000 people who have died since Operation Gatekeeper, a Clinton-era operation that sought to halt illegal immigration. He then introduced his non-profit organization “Border Angels,” which aims to save and improve the lives of immigrants who cross the border from Mexico by strategically placing gallons of water out in the desert where immigrants typically cross and offering free immigration service once they arrive.

His organization was also able to convince Border Patrol to open the door between San Diego and Tijuana called the “Door of Hope,” which allowed family members to reunite for a brief moment at the border.

Morones has worked in immigration reform since 1986 and has dedicated his life to prevent immigrant death and secure human rights. He is also the founder of “House of Mexico,” an organization formed in 1996 meant to promote the pride people have in their own roots. The primary goal of this organization is to host a House of Mexico in the International Cottages Lawn in Balboa Park in San Diego, all while serving the local community that has enriched the culture of San Diego for years.

Now with more than 5,000 volunteers, Morones encourages students to volunteer and apply for internships, regardless of gender, sexuality or race, stating, “We are all one race, the human race, and I believe we all practice what we preach.” This upcoming winter, Border Angels will focus on creating care package stations equipped with food, water and hygiene supplies. They also now accept donations, and have web-links on their site at www.borderangels.org available with registries for Target and Walmart that anyone can browse through to purchase items for the cause.

Border Angels is a non-violent organization centered on human compassion but also faces less sympathetic dangers. During his speech, Morones clarified that the dangers for immigrants are not just Border Patrol or heat stroke, but also hateful groups that wait at the border and attack those on the other side. These groups have acted out since 2009, and while they have changed in name and number, are still very real threats for traveling immigrants. These groups are often supported by others that share the same ethnically discriminatory beliefs.

When asked how to combat hate speech and support immigrants nationally, Morones explained that it is vitally important to defend the Latina/o community from racist jokes or disparaging statements, and to show verbal and visible support. In doing so, it discourages casual racism and garners support and empathy for the community. With the rise in racial rhetoric, it is important to treat our fellow humans with compassion and understanding, as “love overcomes hate, but we need to practice it in everything we do.”

During his speech, Morones told the story of a little boy who walked along a sandy beach with his father on a scorching summer day, picked up beached starfish and tossed them back into the ocean. When the father asked why the son would do such a thing, as his actions did not matter overall, the boy held up a starfish, and before returning it to the sea said, “It will make a difference to this one.”

After he finished this story, he continued on to tell his own, about how he and a group of volunteers found two near-dead men in the desert. They gave them water and shelter for the night, and then parted ways in the morning. Weeks later, Morones stated he received a call from a young boy who thanked him for saving his father’s life that night. Morones specified that any action is better than no action at all, and that even the smallest deeds can have the greatest impact.

“There’s always a chance to do the right thing,” Morones states, “to demonstrate that love has no borders.”

Sam Walsh is a fourth-year student majoring in English and special education. SW850037@wcupa.edu

Kathryn Aiello is a fourth-year English major with a minor in paleontology. KA907028@wcupa.edu