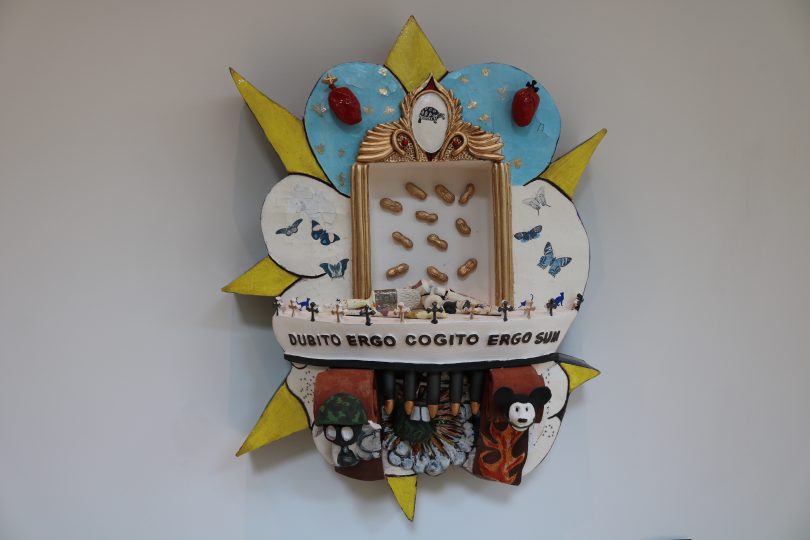 Hopefully some of you remember that, during the previous academic year, my articles centered on film and, to a lesser extent, theatre — two forms of art to which my commitment endures. Yet the beginning of a new semester as well as a new role at The Quad has inspired me to begin a semester-long journey into unfamiliar parts of the art world, particularly ones that, unlike most film and theatre, tend to fiercely resist the structure of a clearly defined narrative. I began this journey last week when I visited the “Shucks, Spinski Redux” exhibition, housed in the Knauer Gallery of the Swope Music Building.

I made sure to conduct no research prior to visiting the exhibition, as I wished to provide an untainted account of the emotions that the exhibits engendered in me – an effect that different parts of the exhibition achieved to varying degrees. I make no claim to background knowledge on the traditions or conventions of sculpture critique — but, then again, “critiquing” is not exactly how I would describe what I am doing here. Another important point to note is that I do not seek to provide a comprehensive account of every piece in the collection, nor to make any arguments about the collection as a whole; I simply wish to share some thoughts on my experience of browsing this exhibition — specifically on two standout pieces within.

An especially unique piece in the collection is Nori Pao’s “Cloned Souls,” which presents a row of boxes that seem as though they once contained small skeletal remains. The most interesting aspect of this piece is the complete lack of actual bones, or of a representation thereof – a lack that evokes a profound sense of absence. Naturally, this sense is accompanied by one of mystery, which significantly heightens the importance of the missing bones. By not letting me in on the secret of bones, Pao fuels my imagination and the bones acquire an increasingly fantastical quality. This piece is a great example of how the removal of the crucial element of an artwork can enable all of its other parts to fall into place, and to rearrange themselves depending on the viewer. 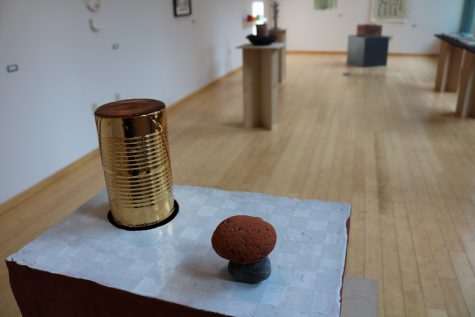 Another exhibit that had a strong effect on me was “To the Early Days at the Barn” by Sally Van Orden. This piece is made of silk print and low-fire bisqueware and includes a series of white bamboo sticks that come together to present the image of a bearded man wearing sunglasses and a blue shirt, with vivid grass all around him and a barn placed far behind. Although I am relatively sure that the sticks are in fact bamboo sticks — or at least that they are meant to look like bamboo sticks — I cannot help but view them as parts of a white picket fence. Perhaps this interpretation arises because of the image that the fences come together to present, mainly the part with the grass. The contrast between a white fence and green grass is, after all, a recurring motif in American culture. Interestingly, although there is much open space in the image, the artwork gives me a sense of suffocation; the sticks that double as a fence triple as prison bars. However, this particular interpretation does not surprise me, as staying in very rural areas for more than a day or two at a time usually makes me feel suffocated — more so than being in the most crowded place does. Perhaps the most unique aspect of this artwork is that the entire picture seems to face you no matter which angle you view it from. I credit this effect — the image’s confrontation of its viewer — to the fact that each slice of the photograph neatly wraps around its corresponding stick, giving the image an even more three-dimensional quality than it already possesses.

I hope that this article has given you enough of a taste to make you consider a visit to the exhibition. If you are interested in doing so, the exhibition will continue to run until Sept. 27 and is open from 9 A.M. to 4 P.M. on weekdays. Also, it’s free.