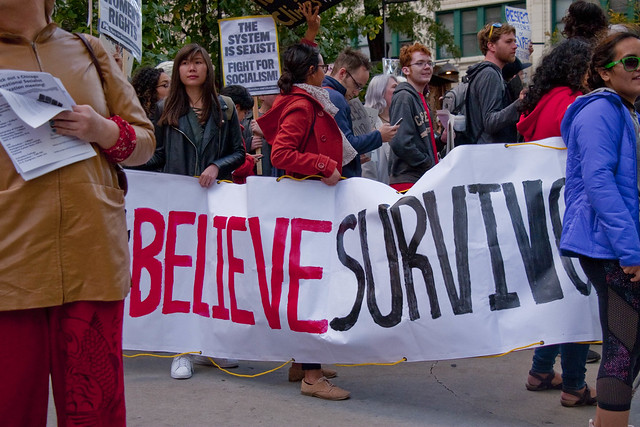 Over the past several years, following the rise of movements such as MeToo and Time’s Up, we have seen great progress being made in terms of helping survivors of sexual assault get the help that they need to cope with their trauma and speak up about what happened to them, knowing they are not alone.

Last year, we saw countless people standing by Dr. Christina Blasey Ford as she bravely shared her story in an effort to protect our country from appointing a rapist to a position of extreme power. Last week, we saw countless people cheering on Chanel Miller as she decided to reveal her name, after years of using an alias to protect her identity as the survivor of Brock Turner’s hideous assault at Stanford University.

These examples, along with many more, go to show that while we still have far to go, more and more people join the fight to protect and listen to survivors — as well as to make the process of recovery as gentle as it can possibly be.

Recently, however, a product was released that seems to have good intentions. Ultimately though, the product is making it harder for survivors to get the closure and justice they deserve.

Including swabs, airtight bags and other items needed for a forensic DNA collection, this product, called the “MeToo Kit,” is being marketed as a way for survivors of sexual assault to collect and preserve evidence in their own home, in the same way that a hospital would.

But respectable intentions don’t always equate to good ideas, and this is a prime example of how.

The kit is largely intended for college campuses, as an attempt to ensure that students are given privacy and the right to choose what they do following a sexual assault.

Upon clicking on the website to preorder a kit, the main screen reads, “MeToo is founded on the principle that you should be able to take back control. Your experience. Your kit. Your story. Your life. Your choice. Every survivor has a story, every survivor has a voice.”

Based on this information, it seems the intentions of the product are inherently good. Owning this kit would make it so that survivors wouldn’t feel pressured to visit the authorities or a medical establishment immediately after living through life altering trauma, and allows them time to process and decide on the next step.

Along with the numerous news sources who have spoken out, the Pennsylvania Coalition Against Rape (PCAR) has reached out to state officials, warning people of the detrimental effects that would follow the use of the kit[.]

But respectable intentions don’t always equate to good ideas, and this is a prime example of how.

As it is now, sexual assault victims who decide to seek legal action more often than not have a difficult time holding up in court against a system that has failed to establish a bases in which all abusers get the punishment they deserve.

The narrative has played out before our very eyes time and time again. The survivor is discredited, invalidated and made out to be an unreliable source, while the rapist is protected and given the lowest sentence possible, if they are even punished at all.

Because of this, a kit that allows survivors to collect evidence by themselves would immediately make them a victim of suspicion in a court that, most likely, is out to tarnish anything they have to say.

As our legal system already has a difficult time valuing evidence that is handed to them directly by the authorities, there is no way a survivor would get any credit for providing evidence that they collected on their own.

So while the MeToo Kit initially seems like it looks out for the protection of victims, it would ultimately only make things ridiculously harder on them. This truth has caused the creator of the kit, Madison Campbell, to face severe backlash in the past few weeks as the press continues to point out how flawed and impractical the idea really is.

Along with the numerous news sources who have spoken out, the Pennsylvania Coalition Against Rape (PCAR) has reached out to state officials, warning people of the detrimental effects that would follow the use of the kit by stating, “It is highly unlikely that an at-home kit collection would align with Pennsylvania’s legal requirements. Nor is an at-home kit considered best practice in caring for victims. Therefore, PCAR does not support the marketing and use of this kit at this time.”

If we lived in a world where survivors were always believed as they should be, this product would be wonderful. However, the world we live in loves to punish those who come forward with their experience and silence those who try to speak out in attempt to pretend like sexual assault is not an issue.

Even with the best purpose in mind, an invention such as this cannot be recommended in good conscience, as it will only sign survivors up for more scrutiny and doubt than they will already face.

If we want to care for those who have lived through sexual assault, what our society needs right now maybe isn’t a kit that signs survivors up for more risk than reward. Specifically on college campuses, as the kit is greatly marketed towards, it is a bad idea to buy into the use of products if we don’t know that they will definitely make things better for students, and for people in general, who deal with trauma. The MeToo Kit should serve as an important reminder to do research before we perpetuate the use of a product like this, a product that we now realize could easily do more harm than good.