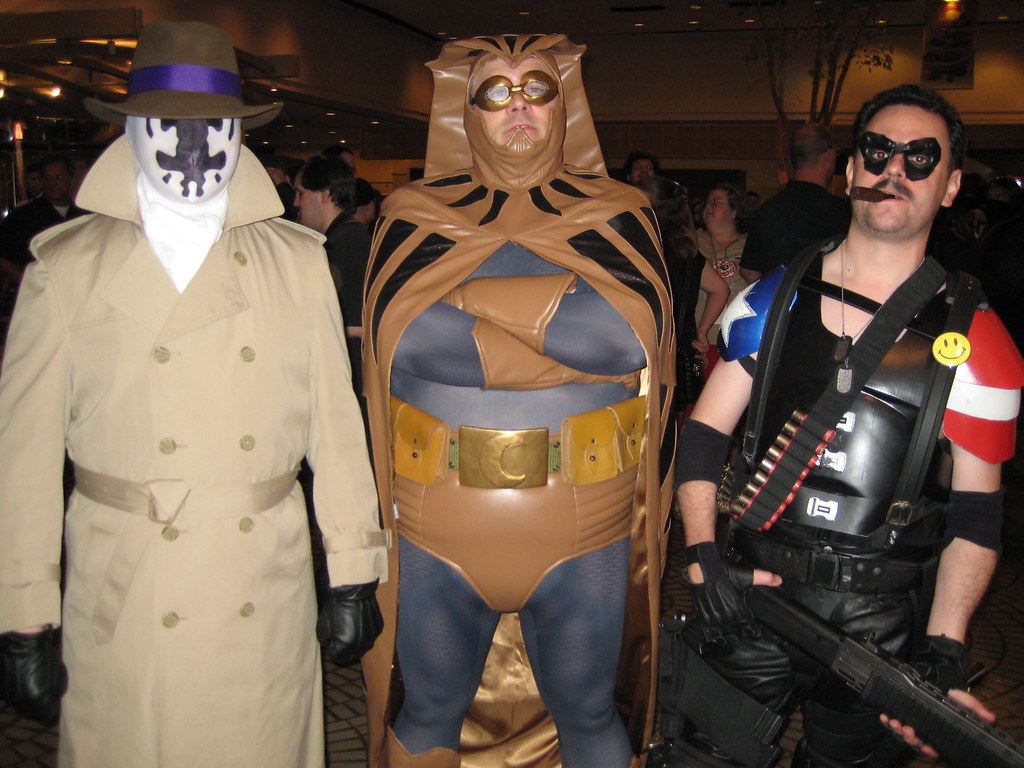 Like many filmgoers, I enjoy the occasional superhero flick. The problem, however, is that this film genre is starting to become more and more exhausting. These types of films used to be somewhat of a rarity in cinemas. When released, they were either complete duds that offered only cheap thrills or artistically brilliant works of film such as “Spider-Man 2” and “The Dark Knight.” Now, the average filmgoer can’t go a single year without one or even two blockbuster superhero films that have lost sight of any kind of artistic originality. With “Avengers: Endgame” out in theatres, the filmmakers behind the genre have painted themselves into a corner. When you have the heroes become so strong and the stakes become so astronomically high, you can only go downhill from there. It’s at this moment that the people behind these movies need to take a different approach to the genre. It’s high time for a satire like “Watchmen.”

Alan Moore’s “Watchmen” changed superhero comics forever, as it took the concept of humans with supernatural abilities, as well as costumed vigilantes and mercilessly satirized it as a dangerous fantasy. In this graphic novel, superheroes are used as a metaphor for the threat of nuclear weapons, because just like a nuclear bomb, if one person went on a rampage such as the Hulk or Thor, almost nobody could stand against them. At the same time, “Watchmen” mocks the idea of costumed defenders who patrol neighborhoods and combat crime. In the source material, when the first caped crusaders came out in 1939, they were greeted with ridicule by the public. Soon after, however, they were looked upon as actual heroes. Decades later, during the ‘70s, the champions in spandex have slowly replaced the police as law enforcement. By that point, the citizens of the nation started to see the masked persons as more of a detriment to their safety and security than the dramatic crime fighters even realized. By present day, when the events of “Watchmen” take place (specifically 1985), the American public demand the police be allowed to patrol neighborhoods instead of  the likes of The Comedian, Night Owl or Rorschach. Moore also ridicules superheroes with the idea that, if they really did exist, they would be inevitably used by the government to fight all of their wars and dirty deeds, like how Dr. Manhattan basically won the Vietnam war for the American government within the span of a single week, and The Comedian solved the Iran hostage crisis. I’m not saying that Hollywood should make another “Watchmen,” but rather use the satire of superheroes that the graphic novel put forward.

It wouldn’t even be all that difficult to make a satire of superhero films. The industry has already made a successful parody of the film genre with “Deadpool.” Studios have already made a satire with “Kick-Ass.” “Kick-Ass,” although not as famous as “Watchmen,” showed how dangerous the life of a mysterious crimefighter would really be and how unhinged you would have to be to put on a cape and beat up random ne’er do wells every night. The only problem with both of the two aforementioned movies is that they, in the opinion of this writer, have not gone far enough. Parody, i.e. “Deadpool,” is not satirical, as the film pokes fun at the tropes and clichés of the genre, but the parody film comes from a place of affection for the superhero genre. Satire, i.e. “Kick-Ass,” does a decent job of showing how dangerous and childish the idea of being a caped vigilante would come off as in reality, but the film itself leaves so much more that can be done with the ideas that it presents. Ideas that can be picked up on by another work of satire.

If the next satire film is made, then it needs to be a superhero movie about superhero movies. It needs to be as ruthless as “Watchmen” with its satire of the tropes and clichés associate with the film genre. The filmmakers behind it shouldn’t worry about hurting audience’s feelings about their favorite fictional vigilante who can smash buildings with his super strength; more so because these same fanboys and girls are often too blinded by their adoration to realize how dangerous their comic book heroes would be in reality. The ultimate aim of this unique satire film would not be to say that this particular genre of film has no artistic merit, but rather that the creators of works within that film genre need to reassess what the genre means from a standpoint of critical analysis. In doing this, not only will the film be the first superhero movie in a long time that is objectively good, but also will most likely create a new wave within the superhero genre.

Incidentally, HBO is making a “Watchmen” television series that will be premiering this year. Hopefully, the team behind it will get the tone and ideas of Moore’s work down and give a better idea of what this kind of superhero satire film should look like.

Kelly Baker is a student majoring in English with minors in journalism and film criticism. KB819687@wcupa.edu