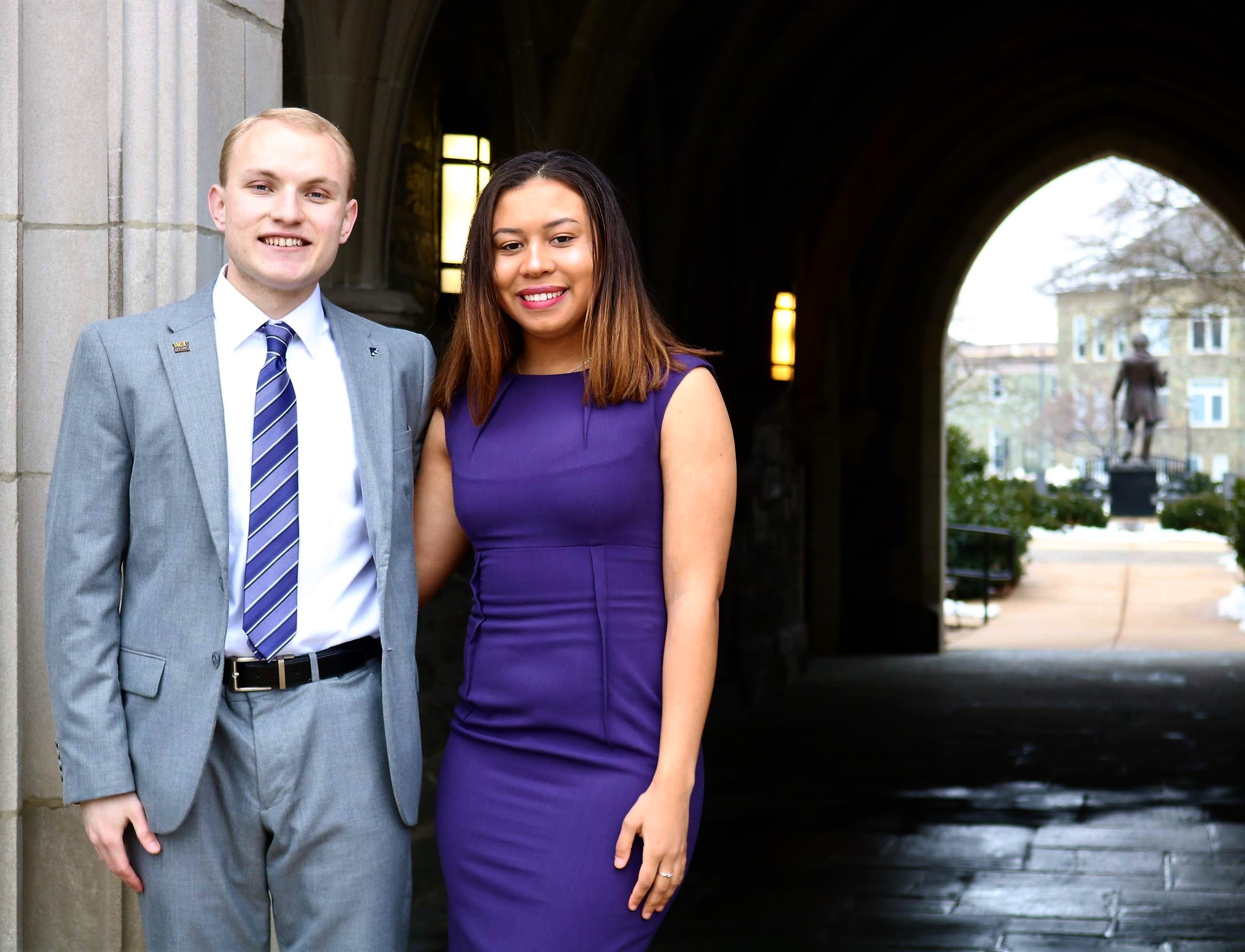 After a campus-wide election for the new executive officers of the Student Government Association, the results were finalized on Monday, April 1 with over 1,500 student votes cast. Joshua Bradley, a third-year accounting major, will be SGA’s new president, governing alongside vice president Taylor Gibson-Campbell. Campbell is a second-year political science major. Both officers are part of the West Chester University Honors College and have served other positions in SGA in previous years. Monica Claghorn, a second-year accounting and finance major, will serve as the board’s new treasurer. The secretary position will be taken up by Mario Ramirez, a second-year music education major. And, finally, SGA’s parliamentarian position will be filled by Duncan Espenshade, a third-year political science major.

According to the West Chester University SGA Mission Page, the Student Government Association works to “provide a unified and responsible government that will promote the welfare and growth of students, and constantly work in the benefit of all students.” SGA’s weekly general assembly meetings are held in Sykes Student Union building in room 115 at 7:15 every Tuesday night, with each meeting open to the public.

Joshua Bradley talked about his goal as the new president of SGA and what he hopes to achieve during his time as president.

“Working on the relationship between the campus and the community is the biggest thing for me. If we have a bigger relationship with the West Chester community, there would be bigger attributes. They’d be more willing to work with us. Students make a big contribution to the West Chester community, but there’s a stigma around college students—I want to work with different groups to create more positive things in the community to eliminate that stigma and work to be a more positive unit.”

Joshua also commented on the disconnect that he believes exists among the student organizations around campus. As president, he hopes to bring more organizations together to help them collaborate as a more focused unit. He also emphasized wanting students to be able to find their place on campus.

He also spoke about the joint-campaign with vice-president elect Taylor Gibson-Campell,  and how their similar visions allowed them to work together.

In encouraging students to vote, Joshua spoke of the low student engagement that is typically seen in SGA elections.

“It’s tough to get individuals out to vote. In order to do that, meeting with students face-to-face and talking to them and giving them their message and hearing their thoughts and ideas was the most valuable thing. I think that’s the reason I won—they got to see first hand who would be representing them. Engagement was tough, but we combated the engagement issue by going to speak with them directly and implementing their ideas with our own.”

He was inspired to join SGA as a freshman in college.

“When I was a freshman, the current SGA president talked about how she was from a small town and was one individual who could still make a great impact on this campus. I wanted to do the same thing—I’m from a  small town, but I wanted to be a part of something bigger than myself and be a part of individuals who want to make a difference. I gained so much experience from them, and that’s how I felt confident and ready to run for president.”

Most importantly, Joshua believed that, “we can all make a difference if we can come together.”

Taylor Gibson-Campell spoke about her platform running for vice president and what she plans to do moving forward.

“They got to see first hand who would be representing them. Engagement was tough, but we combated the engagement issue by going to speak with them directly and implementing their ideas with our own.”

“I created my platform for vice president with Three I’s: Inclusion, Involvement and Imagination. Under inclusion, I reached out to the multicultural organizations around campus, especially the ones who feel most disconnected, like the multicultural center. With involvement, I’ve been trying to get as many students registered to vote as possible and get them more involved in local politics. We only get 26% of our budget from the state, where we used to get 70%. So, mostly helping students know how to advocate for themselves on the local and state level.”

“With imagination, a lot of these huge companies like Insomnia Cookies came from students living in their dorms—I never want students to question their potential. Students should never question themselves just because they go to a state school and think that they can’t do big things.”

Taylor also spoke about reaching out to Greek life organizations, since she believes they are not included in the student body.

She was inspired to join SGA as a freshman when she attended a senator election meeting during her first few weeks at West Chester University.

“When you’re a freshman and trying to adjust, you feel really isolated. I met people who were really passionate about helping students. I made it my goal to help as many students as I could.”

As vice president, Taylor hopes to improve the council of organizations and facilitate stronger collaboration between student organizations on campus.

“I really want to improve the council of organizations. It’s not the most exciting thing to be at—I don’t like talking at people. My goal is to make it more a networking or collaborative event. That might be the only time all the organizations are all in one room together. I want to make it so they have the time to meet and talk and collaborate on things.”

For more information, students can contact the Student Government Association at 610-436-2956, or email them at wcustudentgovernment@gmail.com. Students are encouraged to run for any open senator positions in the SGA. More information on open Senate seats can be found at www.wcupa.edu/_services/STU/sga/getInvolved.

Sam Walsh is a third-year student majoring in special education and English. SW850037@wcupa.edu