Eight things to do in West Chester before you graduate 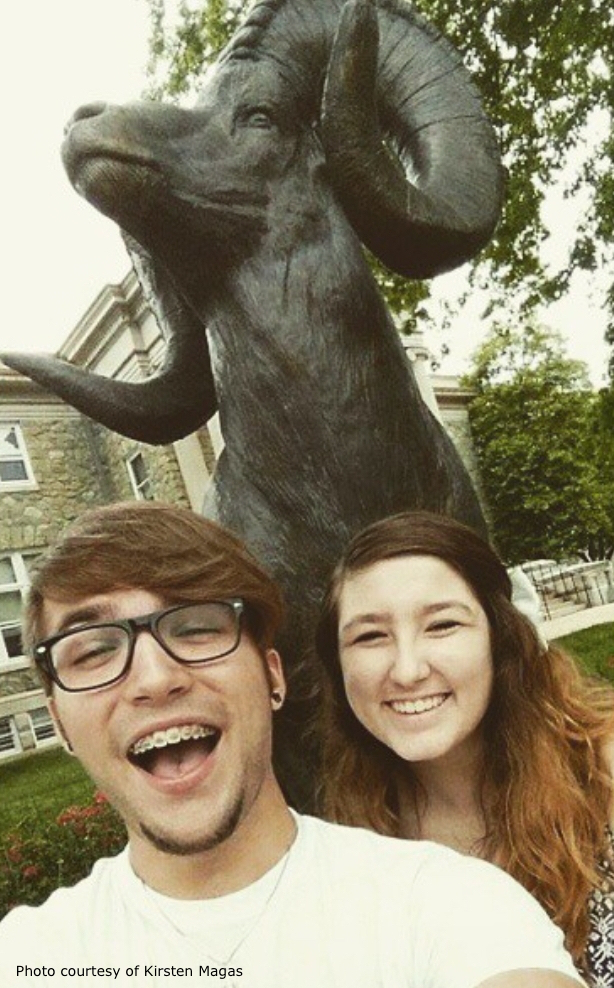 Before scheduling classes on Thursday this week, I met with my advisor. As a junior graduating early, I should be applying for graduation this semester. I’m well on my way to begin to wrap up my time as a college student, which is exciting, yet alarming. I’ve been a little bit reflective these past few days because of the shock of giving up my title as a student, hoping that sharing these milestones does a favor for anxious freshmen trying to experience all West Chester has to offer.

1. Take a pic with Rammy!
Rewind about four years to my junior year in high school: my first college tour. I hadn’t ever been the type to weigh my decisions very carefully. I toured exactly two college campuses—West Chester being the first—and I loosely considered a community college in my hometown before deciding on a whim to go to West Chester University. My mom drove 16-year-old me an hour away from home to start the process of sending her baby bird away from the nest. Coincidentally, my best friend, John Bilcik had also been touring that same day at that same time. What are the odds? We both had such a lovely time that we came here as students together.

2. Eat Ben & Jerry’s on the steps of Town Hall
It’s the little memories you hold onto the most. During one of the nights of freshman orientation—while the weather was still warm enough to wear my pants that I had cut into shorts—John and I bought Ben & Jerry’s at 7-11 at a ridiculous hour of the night and sat on the steps on the corner of Market and High, right in front of the Old Glory statue, talking out our fear and excitement our college experience was to bring. That night is one of my favorite memories I made at West Chester University, which goes to show that it’s the people you surround yourself with that make your experience worthwhile.

3. See the Incomparable WCU Golden Rams Marching Band
Maybe it’s because I played an instrument throughout high school and I had been a participant of the marching band in my younger years, but West Chester University’s Marching Band has earned the title of incomparable for a reason. Nothing can replace the familiar smell of hot dogs cooking underneath the bleachers and the stand tunes jauntily playing after a touchdown at football games, but the hard work that has to go into the halftime performance makes it nothing short of incomparable. In the last few weeks you can enjoy the show, put on your mittens and take the shuttle to the stadium to support the musicians.

4. Visit the famous Dia Doce that has been on the TV show Cupcake Wars
I have so much regret about the fact that I had not visited Dia Doce until nearly the end of my sophomore year. I won’t say too much about this one because I’ve written a seven hundred word article for the Quad on Dia Doce already and the quality speaks for itself: best cupcakes I’ve ever tasted, sweetest employees and the coziest interior in the town of West Chester. Make a left on High Street and follow it all the way down.

5. Go to the West Chester University Drag Show in the spring semester
Every spring, the Sykes Ballrooms are turned into a stage and seats for audience members on a Friday night for a drag performance where the men dress as ladies, the ladies dress as men and anyone in between can put on a show of gender performance that includes a lip sync to a track of their choice. Students are the participants and the host is a previous contestant from the hit TV show RuPaul’s Drag Race. Even the audience members dress up for the incredibly celebratory event.

6. Go to an improv show
One of the most underrated clubs on campus would have to be West Chester University’s  improv team: Deep Dish Pizzazz. Never have I laughed harder than when I’ve gone to see the improv team never break character from the situations they end up in. As always, the group takes suggestions from the audience and the team does their best to put on a truly hilarious show. Keep an eye out for their show times.

7. Make your way through an escape room
West Chester is home to several locations that offer different themed escape rooms. Working together with friends to solve puzzles while hoping to beat the clock is a great weekend activity, although it’s a little pricey. My family visited me at West Chester on my birthday last year and it turned into one of those friendly screaming matches of panic mere seconds before we hit zero on the clock.

8. Go to a Fenn’s Open Mic Night
Fenn’s Coffee is another cozy, welcoming environment on campus. The owners have been supporting local artists by giving them a place to perform. Open Mic Nights are hosted in the upstairs room of Fenn’s every Thursday at 6:30 p.m. Poets and acoustic musicians are the regular acts, but I’ve also seen a one man show who spoke and played the keyboard and flute all in the same song. You can also enjoy the best coffee you’ll ever taste in West Chester while you’re at it—Fenn’s Coffee has won awards for their barista creations!

Of course, there’s much more West Chester has to offer. I’ve only got a thousand words to say what I want to say. However, I encourage readers who have a bit more time to take their time exploring the hidden gems this soon-to-be-nostalgic place has to offer.

Kirsten Magas is a third-year student majoring in English with minors in biology and creative writing. KM867219@wcupa.edu