Evening in Dublin: a short story 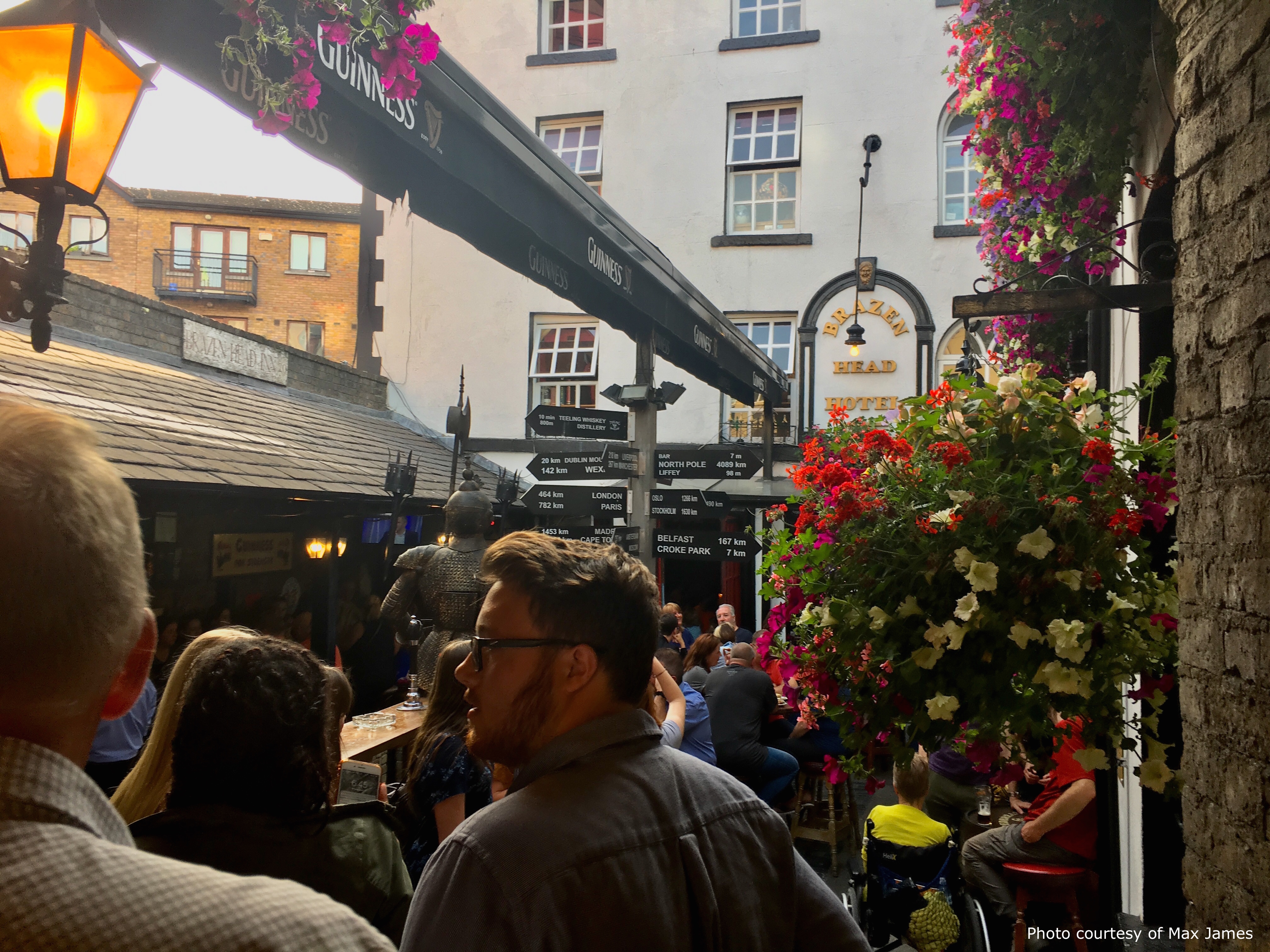 He entered Davy Byrne’s. Moral Pub. He doesn’t chat. Stands a drink now and then. But in a leap year one if four. Cashed a cheque for me once.” (Ulysses, 1922).

“I can’t help but feel like James Joyce is always staring at me,” Jimmy said, bending sluggishly over a urinal. He slurped the sentence out of his mouth, a drunken slushie of words. As he shook out the last few drops, approximately two of which fell back onto his pants, he stared into the mustachioed, blank portrait of the late Irish author. “Like, jeesus, do they need a picture of him above every pisser in Dublin?”

“If I recall, your parents named you after him, didn’t they?” called a straining voice from the stall. “Something about Ulysses turn on old Janet and Conor, eh?”

“Coming from the man named Oscar,” said Jimmy, zipping his fly and squeezing some soap out of the dispenser. Doyle’s Pub was stained with a graffitied residue of angry drunks and angrier tourists, each scrawling their own poetry against the yellowed tile walls.

With a flush and a stomp, Oscar emerged from the stall.

“Arright, let’s get back to it,” he said to Jimmy, blatantly ignoring the soap. “It’s a short walk from here to The Brazen Head, after all.”

“The Brazen Head? Why The Brazen Head?” Jimmy asked, drunken annoyance dripping on his voice. “We might as well go to the Temple Bar, it’s going to be absolutely filled with American tourists.”

“Jimmy, man, it’s not like we’re not tourists either. Besides, Americans never grow tired of our west county charm. We’re exotic. It’ll be fun, you’ll see!”

Oscar patted Jimmy’s shoulders and bounded ahead of him, climbing the steep, narrow stairs of the centuries-old pub. Another picture of James Joyce rested at the top of the stairwell, with an accompanied sign stating: “According to eye witness accounts, James Joyce had a drink here on at least three occasions.”

“Why don’t we go to The Quays? Or The George?” asked Jimmy as they exited the bar, bracing the brisk bite of autumnal air. “How often do we get to go to a nightclub in Westport?”

“Oh no, oh no no, you know my rule: any bar with a ‘Q’ in the name is not a good idea. Same goes for euphemisms, names without apostrophes, and locations with more than two Killers songs in their playlist. It just ain’t happening, Jimmy,” said Oscar.

Jimmy began to lag behind the bounding steps of his friend, kicking his tired shoes on the sidewalk, hands tucked into his jacket pockets.

“What’s up? Going to complain again? I’m telling you, the Brazen Head—”

“I think I’m just going to go back. I’m tired,” Jimmy responded. Oscar stopped and turned. “The music at Doyle’s honestly drained me, and I want to make sure I catch the bus and all that.” Oscar’s face turned into a mix of frustration and disappointment, two paint colors mixing to create brown.

“…Alright, that’s fine,” he responded after some time. “I’ll see you at the hotel–but I’m telling you now, you’re going to regret it!” Jimmy nodded, and turned away from his friend, shoulders comfortably slouched. He heard Oscar yell, “IT’LL BE A STORY, JIM! A STORY!” a few times before the distance grew too great.

Walking a fair distance, Jimmy winded himself into the mismatched cobbled streets of Dublin, entwining his drunken state with his lack of direction. A man in a raincoat, hobbling with a confident vizier only Americans can imbue, approached him.

“Hey, dude, do you know how to get to Temple Bar?” the rain-coated American asked.

“I don’t even know how to get home,” Jimmy replied. They kept walking, separate paths.

He squinted at the buildings surrounding him, and made out a single street: Duke, painted faintly on one brick wall. Hazard guessing, he took a right, and journeyed through a pitch black patch of street. The next lamp post, ornate and refined, rested outside a peculiar pub entitled Davy Byrne’s.

Confused by the seemingly inconsistent city planning, Jimmy turned back to check the street again. Sure enough, “Duke Street” still laid on the brick, but now the paint flourished, glowing almost, as if just made.

“Excuse me, sir, do you know how to reach The Temple Bar?” still an American accent, but this one posh. Probably from New York. Jimmy turned to see a man dressed finely in a peacoat.

“Uh, I don’t even know how to get home?” Jimmy said. The American scoffed and kept walking. Lost past the point of comprehension, the confused drunkard plotted one course of travel: back into a pub, at least following Oscar’s rule of the apostrophe.

As he stumbled closer, he took note of the passerby lingering outside the entrance: all dressed finely, dozens of ties and woolen suit coats, pipes smoking a cloud of tobacco.

“Is there…some kinda convention going on? Is this a private party?” Jimmy asked one of the patrons. The man looked back at him with a quizzical face before answering.

“No, no, anyone’s welcome here—no matter what they wear, I presume. Davy will get ya set up, get you a glass of Guinness in your hands before ye can say no, right, just head in there and yell for Davy or Darlene if she’s still ‘ere-”

True to the man’s word, before Jimmy could say no, the patron grabbed Jimmy’s arm and led him into the bar, all the while yelling to no one in particular.

“Ey! We have a west county man ‘ere! Get ‘im a drink in his hand and somethin’ to smoke!” He turned back to Jimmy. “You can call me Adam, sir. Just about the holiest name a man could get, save for the Almighty himself, not presumin’ I should be named after Him. What do they call you?”

“Jimmy,” Jimmy said, flabbergasted. The lights mesmerized him first, ornate in their build and so impossibly new looking for their design. The people mesmerized him second: all men, all smoking, all suited.

Someone handed him a pint of Guinness, and Adam toured him through the bar.

“So, this your first time drunk in Dublin?” Adam asked.

“In a long while, yeah. It’s not like how I remembered it,” Jimmy said. “So is this like, some kind of club meeting? I really don’t feel dressed for it.”

“Club!” Adam laughed. “No, no, the only club you’ll find here is the revolutionaries. Have you heard about all that in the west? You gonna join Collins’ crew? He frequents this place quite much, you’ll probably find ‘im tonight…”

“I … I don’t know what you mean, I’m afraid,” said Adam, now beginning to reach the same level of confusion as Jimmy. They were interrupted by a fine voice in a booth.

“Gentlemen, I see worried faces and hear words that I can’t place. Please, join me,” the stranger called. He had a pencil mustache, glasses seemingly too small for his face, and a notebook at his table. Jimmy laughed as he approached.

“You must be James Joyce,” Jimmy said. The man nodded, smiling.

“And I thought we’ve never met,” James said. “Tell me: was it a drunken misadventure or did you actually read one of my works? I feel like I’d remember a man dressed as peculiar as you.”

Adam looked from one James to the other, before bowing his head and stepping away. Jimmy playfully picked up the notebook at the table, leafed through the pages. “That’s an amazing costume, James. How much did it cost?”

“Well, if you mean the suit, it was cheaper than I imagined, but still more expensive than I’d want,” James said. Jimmy stopped at a page, read the section aloud:

“Set a man on fire and he burns set a woman and she smolders.  Virgin is she?  Virgin am I.  Virgin of Virgo constellar aegis of Rome is now England is new Rome the whole world they are.” 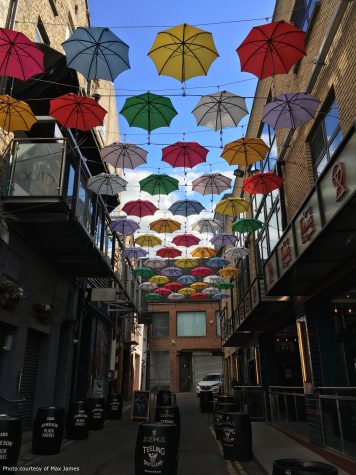 “You even have his style down. I’m impressed,” Jimmy said. The last Guinness, already finished, pushed him into a new realm of drunken honesty.

“Well, I don’t know who you mean by “him”, but the Irish Times has praised my writing as ‘one of a kind’, and—”

“Oh, sod off!” Jimmy said. “This whole event is complete horse shit. It’s like every step I take, I see the face of James Joyce plastered above a toilet, or some fire hydrant says ‘James Joyce’s dog pissed here once, come smell the goddamn piss molecules wedged into this very concrete!’ I’m tired of it. Everyday, every English teacher I had, they’d always go ‘Oh, James! Just like Joyce! Oh, James!’ I’m Jimmy now, thanks to James Joyce. I don’t even like the name Jimmy. I don’t even like Joyce’s writing! Never did! It makes no sense! It’s absolute, incomprehensible garbage, and either people have ‘claimed’ to read it for the importance of Ireland, or they just haven’t read it at all, and somehow, we still are talking about the sorry sap of a man who vomited on a page and called it a novel. I could do that in a day. Anyone could!”

James looked sternly at Jimmy, whose face now bore resemblance to a tomato. Sighing, and playing drums on his notebook, he spoke.

“To be quite honest, I’ve never met a man so violently against my writing. I think I would’ve remembered a night with you if we had one, and I will surely never forget this one,” said James. He reached out his hand, gesturing for a shake. “Thank you, Jimmy–my apologies, James.” Jimmy shook it back, nodded with a face of slight satisfaction and clumsily climbed out of the booth.

He made his way towards the exit, proudly forgetting to ask directions. Adam stopped him on his way out.

“Jimmy! Leaving so soon?” He peered over to look at James; the booth held no man, but one book. “Strange, I’ve never seen James without his notebook. What did you say to-hello?”

Jimmy was gone too; he left a light jacket, a polo shirt, a bus pass, jeans with approximately two drops of dried urine and a pile of worn bonedust atop them.

“I can’t help but feel like Oscar Wilde is always staring at me,” Ozzy said, bending sluggishly over a urinal. He slurped the sentence out of his mouth, a drunken slushie of words. As he shook out the last few drops, approximately two of which fell back onto his pants, he stared into the piercing eyes of the elegantly dressed Irish author. “Like, jeesus, do they need a picture of him above every pisser in Dublin?”

“If I recall, your parents named you after him, didn’t they?” called a straining voice from the stall. “Something about Dorian Gray turn on old Sean and Anna, eh?”

“Coming from the man named Billy Butler,” said Oscar, zipping his fly and squeezing some soap out of the dispenser.

Max James is a fourth-year student majoring in communication studies with minors in French and creative writing. MJ853459@wcupa.edu