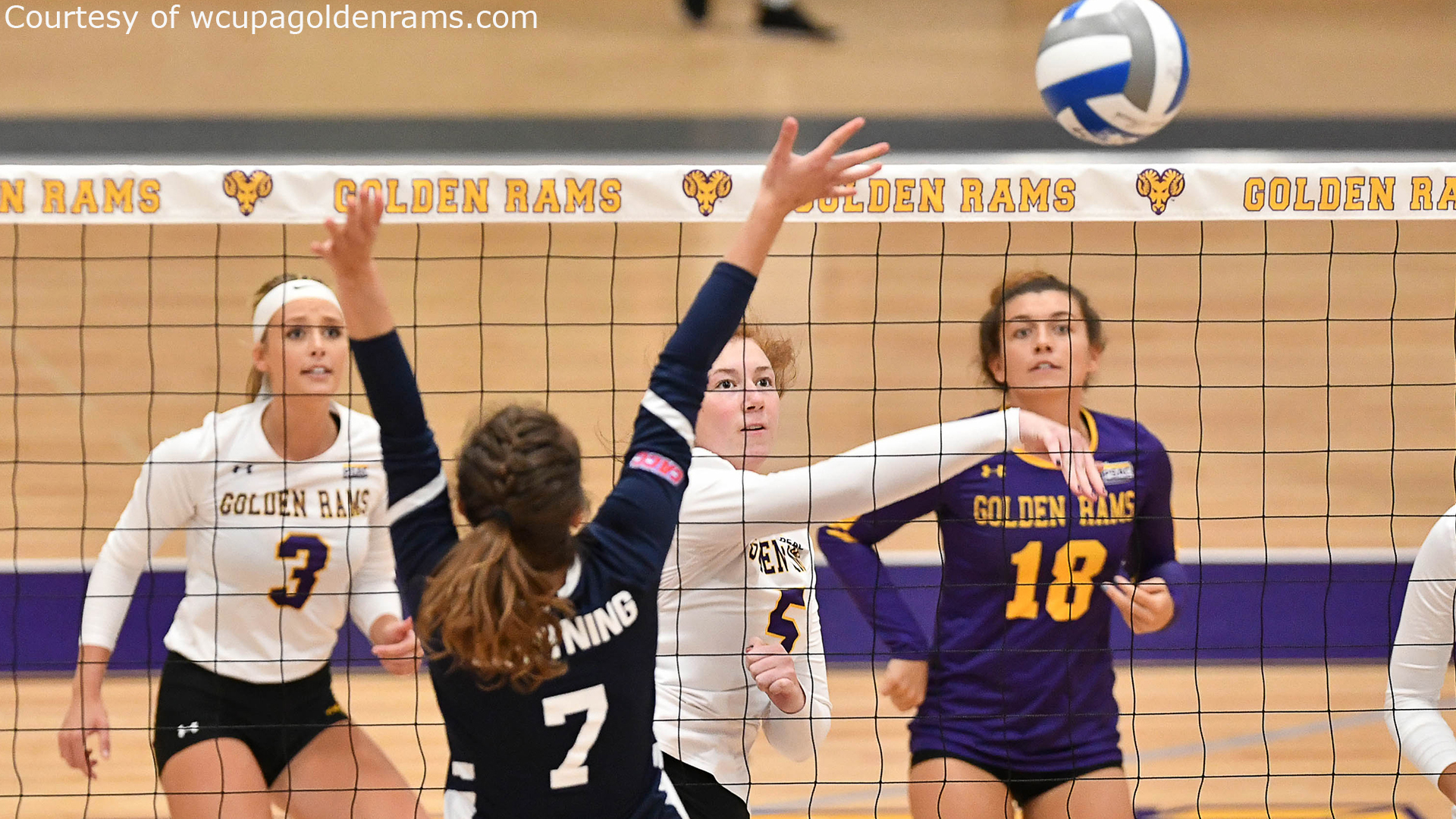 On Sept. 18, West Chester traveled to face Felician College after previously defeating Edinboro three days before. Coming into the match, the Lady Rams were still preserving an undefeated record of 12  wins and zero losses.

Felician College was just another casualty of WCU’s undefeated run, as they fell three sets to none (25-13, 25-13, 25-18). West Chester had hitting percentages of .400+ through the first two sets, allowing them to take the comfortable two set lead that they had. On the other hand, Felician had a .078 hitting percentage for their game average.

Second-year Brianna Fisher and first-year Julia Vreeswyk tied for the team lead in kills with nine. Defensive specialist Rachel Hutchinson proved to be a problem with her serve as she racked up four aces. She also had five digs. Grace Whitney chipped in five kills along with a block. Team captain Jillian Grammer set an example for her team as she dished out 30 assists along with 14 digs, both team-highs. Nicki Yates had a solid game with five assists and 12 digs; although she is used to leading the squad in digs.

After another strong performance, Coach Katherine Bellaver had this to say on the team captain, “She has been named Southeast Player of the Week twice and she is our leader on the court. She runs the offense and has been making great decisions so far this season.”

WCU had another three-day break before traveling up to Erie, PA to face Mercyhurst University. After the two teams traded sets back and forth, West Chester escaped with a hard-fought win in a very close contest (25-22, 21-25, 26-24, 29-31, 15-12). Every set, especially sets three through five, went down to the wire as West Chester barely preserved their undefeated record. WCU finished the game with a hitting percentage of .212, and Mercyhurst with .158.

Third-year Rachel Robb finished the game with 20 kills, leading the team. Robb also led the team in blocks with three. Vreeswyk and Fisher had another strong game, with 17 and 13 kills respectively. Hutchinson, Whitney and Grammer each had an ace. Whitney also chipped in two blocks on the defensive side, while Grammer also had a whopping 55 assists and 21 digs. Yates’ 23 digs was a team-high, while also chipping in eight assists. Fourth-year setter Emily Ahern contributed with 10 digs and fourth-year Allie Duffy helped out on defense with two blocks.

Coach Bellaver had this to say on the difficulty of the match, “Yes, Mercyhurst was a challenging match.  We had to come back several times from six or seven point deficits, but we played hard and ended the match strong.  Rachel Robb was a crucial part of that win in the absence of Abbie Dischert.”

The Lady Rams had little time to rest, as they took to the court against Gannon University the next day. Sadly, West Chester was handed their first loss of the season as Gannon won in four sets (24-26, 25-23, 19-25, 20-25), their PSAC record now at 3-1. A tough first set proved to be the key in the match, that could’ve pushed the game into a fifth set if WCU took it. West Chester had a difficult time finding their groove throughout the whole game, and their combined hitting percentage was an unideal .091. Gannon essentially doubled WCU’s hitting percentage, as they finished the game with a combined .207.

Rachel Robb finished the match with 13 kills, which led the team. Behind her were Vreeswyk with 12 kills and Fisher with eight. Fourth-year defensive specialist Alex Gleason was the team-leader in aces with four, while displaying an all-around performance with three assists and 15 digs. Whitney proved to be key on defense again and her seven blocks were second to an opposing player for the game-high. Captain Jillian Grammer played hard in the loss as she racked up 35 assists, two aces and 12 digs. Yates was not to be outdone, as she finished with a game-high 36 digs, four assists and three aces.

After their first loss of the season, Coach Bellaver had this to say on the match, “Although we lost to Gannon, we again showed poise by coming back after a slow start and took them to the limit despite our offensive numbers being low for the match.  We will recover with a strong week of practice to prepare for Lock Haven and Bloomsburg.”

Takeaways from this week: First-year Julia Vreeswyk and second-year Brianna Fisher continue to produce, they aren’t giving Coach Bellaver much of a choice when it comes to playing them or not. First-year Grace Whitney is becoming a stalwart force on the defensive side, proving her worth to the coaching staff and teammates.

The Lady Rams look to bounce back after their first loss, as they come home to face off against Bloomsburg University on Friday, Sept. 28 and Lock Haven University on Saturday, Sept. 29. Go out and show your support!