Athlete of the Week: Kelsey Munster 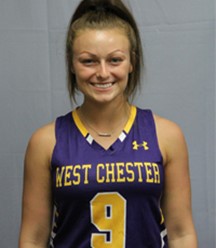 Kelsey Munster (Lancaster, Pa./Hempfield) had a strong week this past week as she scored a pair of goals (including the game-winner) for a total of four points in the Golden Rams 8-3 victory over Bentley on Monday afternoon.  Munster scored the first two goals of the contest within the first eight minutes of play to put West Chester ahead once and for all in the victory. Overall, Munster took a total of five shots on the day including the two shots on goal that both turned into goals. As a team West Chester held a huge advantage in shots and shots on goal as they won the shots battle by a margin of 30-10 and the shots on goal battle by a margin of 19-6.