The Breaking Point: A response to Kaepernick 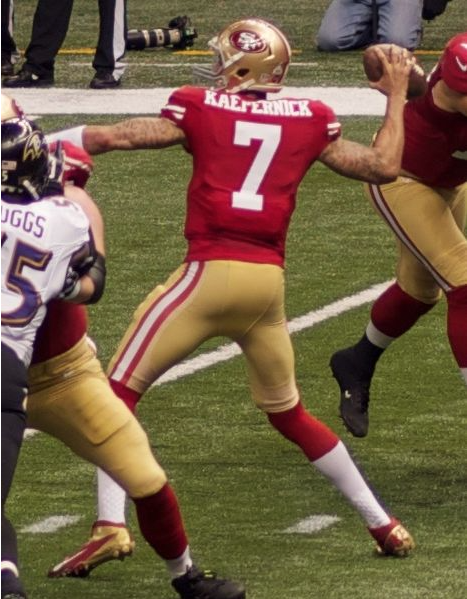 “I do solemnly swear that I will support and defend the Constitution of the United States against all enemies, foreign and domestic…” -First Clause of the Armed Forces Oath of Enlistment.

Ethics are a funny topic. Everybody claims to have them, but when it comes down to it, more often than not people tend to abandon their ethics in order to satiate some pathological emotion that strikes truer at the core of the ego than any self-professed morality ever could.  In his text “Twilight of Idols” (1889), Friedrich Nietzsche spoke about the implications of this phenomenon by noting that, “[w]hen one gives up Christian belief (for example) one thereby deprives oneself of the right to Christian morality…”  Ladies and gentleman, I’m not here to spout religious hullabaloo at you; instead I’d like to raise a more calamitous point.

“Colin Kaepernick.” That’s all I have to say. Right now some of you are cheering, others are groaning. On either side of the argument Kaepernick is the face of something we, as a culture, haven’t quite gotten a handle on.  In my own community, the veteran community, there’s a schism growing around just that matter.

The first argument is that Kaepernick is being disrespectful to our fallen by failing to recognize the symbols of our country’s greatness, namely the flag and the national anthem. I understand this position implicitly. I’ve had more than my fair share of friends come home in flag draped caskets, and seen too many families receive those flags for kids who weren’t much older than the rest of you.

On the other hand, there are people with my point of view.  I’d like to preface this argument by saying that I do not like Colin Kaepernick. It’s not personal. He was a ho-hum quarterback with a style of play that defenses found easy to hone in on after a while, and when his career started to flag, I feel like he amped up his protest efforts in an attempt to raise his social status.  Here’s the thing about my opinion:  it doesn’t matter.  Not really.

My personal feelings about Kaepernick’s motives are irrelevant to the ethic with which I govern my life.  What I value most is the oath I took almost fifteen years ago.  I swore to defend and uphold the Constitution; the symbols of the state, the flag and the anthem, represent that document and the rights it guarantees.  I’d argue there’s more disrespect in failing to uphold those values than there ever could be by peacefully participating in the constitutional right to protest. Ultimately this raises the question, “What constitutes patriotism?” If we’ve given up belief in the Constitution, which issues such as these or the growing push for “Free Speech Safe Spaces” point to, don’t we then deprive ourselves of right to individual liberty, the morality of our country?

I’ve promised my editor I’d keep this editorial short, so I’ll leave you with this:  The issue surrounding the NFL is not insignificant. To the contrary, it’s more like a microcosmic representation of where we are as a country, and therefore shouldn’t be ignored anymore than the latest Trump scandal or the inequities of Maxine Waters.  At the moment the American political system is a syzygy, and these binaries require equilibrium for continued survival.  We’re a teeter-totter folks.  As more of us run to the extreme ends of the board, either in the name of “social justice” or “patriotism,” we find ourselves inching closer and closer to an irreparable breaking point. Think about that.