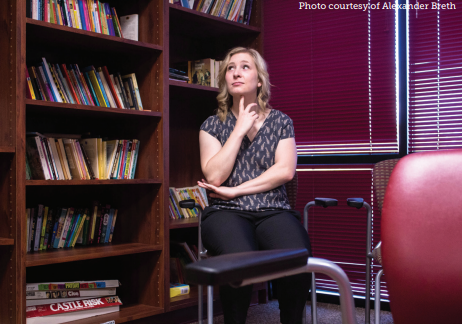 Coming to college has its own burdens. To many, it can be a culture shock as it is the first time living on their own; to others, it is a logical evolution from where they came from. All share a common goal of growing personally and intellectually to better society by achieving personal success.

Now imagine that you were comfortable in the change, but you started at a different college. Imagine having to pick up and move after just settling into a new environment. For many transfer students this is the reality.

Jeaneatte Glusko, 24, is a senior marketing major at West Chester University with a prior Associate’s Degree; she is a transfer student and this is her story.

“I worked at Michaels, I worked in catering . . . I also had a lot of family stuff going on so it worked.”

While starting originally in her freshman year at West Chester, she was forced to leave due to troubles with financial aid. She took this opportunity to attend a community college to earn money to return. However, once finally returning to West Chester, she found the transition difficult. Financials continued to be an issue.

“A professor told me that since West Chester is so cheap students shouldn’t work while in college and should rely on loans,” she said, “[but] I worked three jobs last semester.”

Getting involved and adapting to the systems students take for granted is also an obstacle for transfer students.

“As a transfer student, you don’t know how to utilize the systems in place,” she said, “and it’s not feasible to get involved as a transfer student.” She went on to describe how many of the friends she acquired in college were met through group projects.

She expressed how for transfer students the only real option for learning how things work here is Transfer Student Orientation, which truly isn’t valuable as it is structured now.

When asked about her experience in the marketing program, she also commented that finding internships is hard, as many of the career fairs that are hosted by the university are heavily biased in favor of finance and economic jobs. We talked about the recent State of the University address that I attended in September, and how this brings hope to the program as she thought many of the changes presented will ultimately enrich what it means to be a marketing student at West Chester. I personally think that these new developments will also give transfer students new avenues of gaining connections and building lifelong relationships. After all, what we study and create here are not for college days alone, and they will be with us for the rest of careers and lives.

Alexander Breth is a fourth-year student majoring in English writings track. He can be reached at AB834895@wcupa.edu.