Under A Rest experiences exceptional year 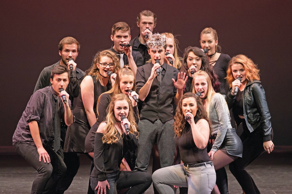 WCU’s first and only co-ed acapella group Under A Rest had quite the year. The group drew inspiration from the critically acclaimed film “Pitch Perfect.” And just like in “Pitch Perfect” the group found themselves at the International Championship of Collegiate Acapella (ICCA’s) a few weeks ago. The tournament brought together the top acapella groups from around the United States and Europe to “showcase the art of student acapella.”

Last year at the ICCA’s Under A Rest (UAR) was able to grab third while receiving best arrangement and choreography honors. The young group, having only been in action for three years, was eager to compete this year for the second time at the ICCAs.

Spencer Camacho, a second-year music education and piano performance major, is the music director of UAR. Within his position, he is responsible for arranging the music for their competitive set. In three words, he describes his set as a “story worth telling.” At the ICCA Mid-Atlantic Quarterfinal held at Drexel University this past January, Under A Rest placed second, receiving the best arrangement and choreography awards for a second consecutive year. Since the top two groups of the quarterfinal advance, Under A Rest is the first acappella group at WCUPA to ever move on to the semifinal round.

In preparation for their next competition, UAR held an invitational at Emilie K. Asplundh Hall featuring the other three WCU acappella groups: High Street Harmonix, the Gracenotes and the Suspensions, as well as two Drexel acappella groups: 8 to the Bar and the Cleftomaniacs.

Under A Rest used this invitational as a platform to benefit Rise Against Hunger. Formerly Stop Hunger Now, this organization is an international hunger relief organization that coordinates the distribution of food and other life-saving aid around the world. They provide meals typically to school children in third world countries.

Addressing hunger is a key strategy to increasing education rates and providing a way out of poverty in developing countries. Providing meals in schools increases enrollment. As education levels rise, birth rates and disease rates fall and communities be- gin to sustain themselves. This event raised $1,000, allowing Rise Against Hunger to provide over 3400 meals for children across the world.

After a great experience at the ICCA semifinal round, Under A Rest per- formed as an exhibition group during judge deliberation at the International Championship of High School Acappella (ICHSA) Mid-Atlantic semifinal in Cherry Hill, NJ.

Under A Rest has had an eventful semester so far and still have more to come this spring. During WCUPA’s annual Relay For Life charity event, UAR will perform during the Luminaria portion of Relay in which participants honor loved ones lost by cancer. The group is honored to be asked to perform in this event and express its “symbol of Hope found at every Relay For Life event.”

As the group continues establishing itself as a serious group in the collegiate acappella world, they are excited to professionally record their competitive set, creating an EP to share with family, friends, and fans on iTunes and Spotify. As eager as they are to go to the studio, they need help raising funds. Any size donation will help make this happen. Donations are accepted at: https://www.gofundme.com/under-a-rest-album-recording.

Though the group is done for the year, you can keep up to date on all things going on with the group through their social media accounts. They have a Facebook page called Under A Rest WCU, as well as an Instagram and Twitter with the username @wcu_underarest.

Ryan Hunt is a fourth-year student majoring in communication studies. He can be reached at RH803937@wcupa.edu.