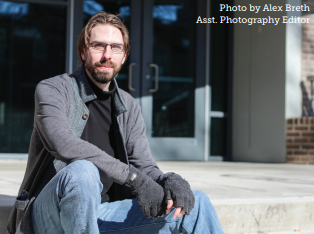 Joshua Dix is a 33-year-old philosophy major at West Chester University. Many would assume that he had simply gotten a late start on his education, but that is not the case.

Dix enrolled back in 2003, opting to take advantage of the free tuition granted to him through his mother’s employment at WCU. But why hasn’t he graduated yet? During his first time here, Dix decided to learn for the sake of learning, not graduating.

“I was here from 2003-2009 and then I left for seven years. I came back last year… During my first time here, I wasn’t paying for classes. Since I’m really a slacker at heart, I didn’t really care too much what my grades were, except in some of my program classes. I would kind of just sign up for a class and think, ‘Yeah, I’ll do this class this semester,’ so I ended up in a bunch of anthropology classes, which I’ve always found interesting, some computer science classes and whatever seemed fun to learn. I have ADHD, so I didn’t really realize how important it was to have a schedule for myself until I was older. I ended up skipping a lot of classes. After those six years, my parents moved away and my free tuition dried up. I didn’t know what to do, so I ended up moving in with some friends and getting a job at the only place I could walk to, which was Wawa. I still work for Wawa, but only a couple hours a week because I’m wrapping up school now.”

This time around, Dix is focused on getting his degree while still leaving room to learn for the sake of enjoyment. He believes that he will graduate this year and plans to attend law school following graduation.

“I’m good at a lot of things that are structured, so, computers, law, things like that. I kind of want to get an ‘actual-real-person’ job after making sandwiches for six years.”

Katherine Mash is a third-year student majoring in communication studies. She can be reached at KM854840@wcupa.edu.