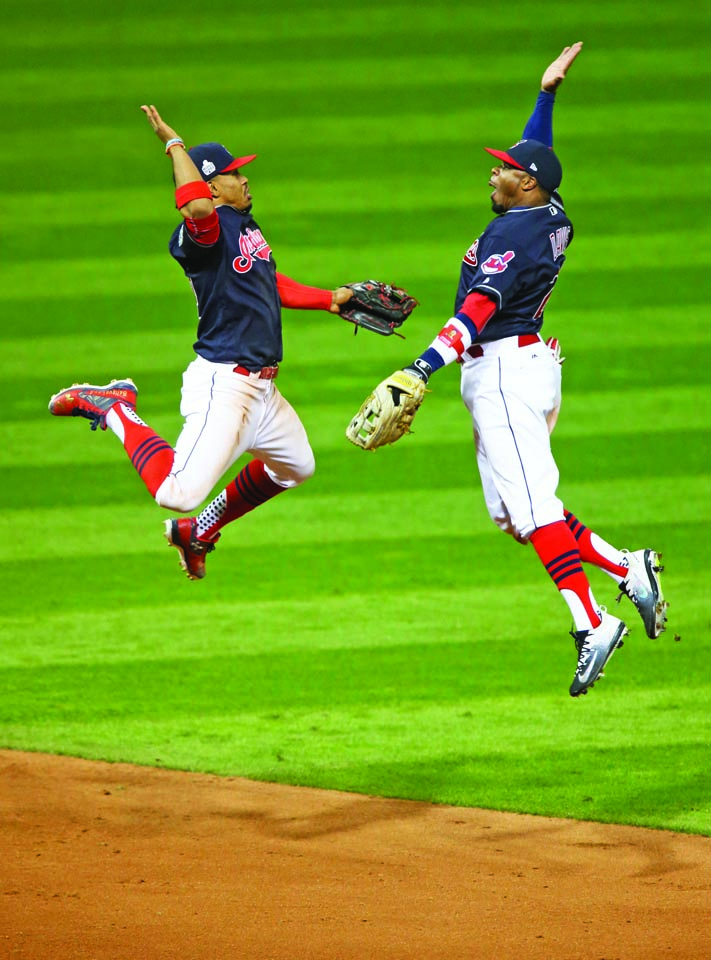 As LeBron James and the Cavaliers begin to defend their NBA title, there’s another team in the land that wants to bring a championship back to Northeast Ohio. Another underdog team, another team with a long title drought, another team desperate to win. The Indians are one win away from breaking that terrible streak, from capturing that elusive title and making the long- suffering fans of Cleveland twice-blessed in one year.

Having handily wrapped up the first two games at Wrigley, the Indians look to close out the series with a win either at Wrigley this Sunday or, if they must, back home in Cleveland either Tuesday or Wednesday. For the Tribe, the icing on the cake in Saturday’s game was Jason Kipnis’ three-run home run in the seventh inning, which put Cleveland up 7-1 in the game and propelled them to a 3-1 series advantage.

For the slumping Cubs, playing in their first World Series since 1945, only elimination games remain. It seems that the “Curse of the Goat” is still in full force. “Them Cubs, they ain’t gonna win no more” is the alleged curse placed by Billy Sianis, the owner of the Billy Goat Tavern, who was forced to leave Game Four of the 1945 World Series because of the bothersome smell of his pet goat, Murphy. The Cubs lost the 1945 World Series to the Detroit Tigers and haven’t appeared since until this year, or won at all.

The Cubs, heavily favored coming into the series, have floundered. Cleveland’s dynamic bullpen, anchored by strikeout artist and setup man Andrew Miller as well as closer Cody Allen, has largely prevented Chicago from scoring. The Indians’ stellar pitching overall, especially that of ace Corey Kluber (2-0 with an 0.75 ERA so far in the series), has silenced the Cubs’ big bats.

This Indians team has overcome many obstacles to get to where it is: injuries to star outfielder Michael Brantley and key starters Danny Salazar and Carlos Carrasco have forced others such as Ryan Merritt and Josh Tomlin to step up to the plate; the 80-game suspension of outfielder Abraham Almonte for violating the league’s drug policy, combined with Brantley’s injury, press young players like Tyler Naquin into the spotlight and a smaller payroll largely preventing the acquisition of big-name, free agent talent keeps management scrambling to find low-cost, high-value players.

Cleveland appears to be a team, a true team. Although the Cubs may have great clubhouse chemistry, a player-friendly manager and 100 wins, the Indians, not unlike the Cavaliers, have rallied together to vanquish a powerful foe. The Cubs, like the Warriors, led the league in wins and likely have the league’s MVP (Kris Bryant) on their team; the Cubs, like the Warriors, didn’t suffer much at all–until the final round of the playoffs.

Now, to be fair, perhaps the Cubs, down 3-1 in the series, will make a comeback mirroring that of the Cavs this past June. But it would take a miracle. A Draymond Green suspension. Nightly superhuman performances from a Baseball LeBron.

What the Indians have is something that can’t be bought, not even by a bankroll as big as the Cubs’. They have a team–a team that plays together, rallies together and wins together. They have Mike Napoli–a veteran with a ring, who knows what it takes to pull together a scrap heap team and win it all. They have Jose Ramirez–the surprising player Cleveland fans call their “G.O.A.T.” They have Francisco Lindor, one of the most talented, exciting young shortstops in the game. They have Coco Crisp, an outfielder who willingly accepted a trade to come back to where his career began and delivered the winning hit in Game Three. They have Corey Kluber, the Cy Young late bloomer. They have Trevor Bauer and Roberto Perez. The list goes on.

James, in breaking the Cleveland’s 52-year title drought, said that “for us to [be] able to end this drought, the fans deserve it. They deserve it.” Perhaps the fans deserve an end to this baseball title drought, too, for their suffering since 1948. Perhaps the players deserve this championship, too, for their perseverance and resilience all season long. Perhaps Cleveland deserves to become Believeland again: same year, different sport, another parade? Believe it.

Isaac Linton can be reached at HL820875@wcupa.edu