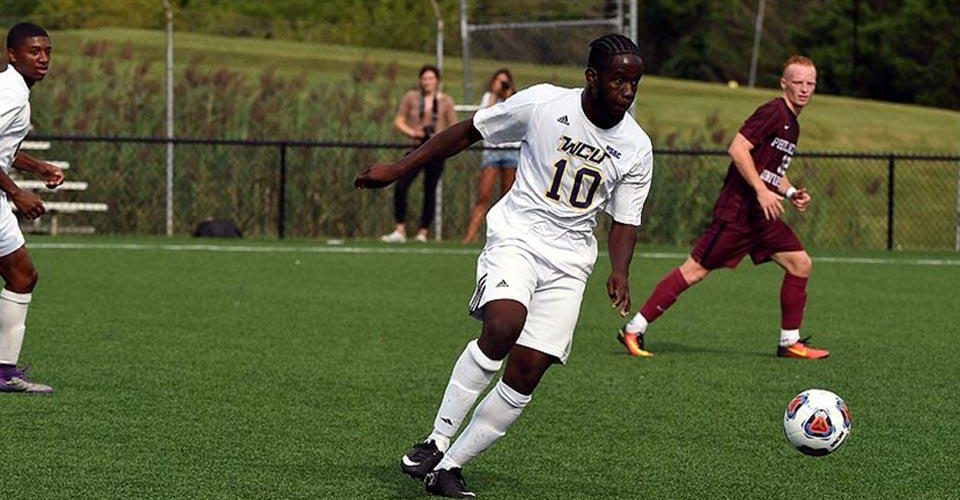 The Golden Rams men’s soccer team ended the season on a high note, extending their streak of no losses to seven, the only discrepancy being a tie in their final home match this week. This is a huge final result for a team that wasn’t given any preseason recognition, being predicted to finish seventh.

Their second place result is a tremendous accomplishment for the men, and now they have more soccer to play thanks to their hard work.

Their match earlier this week was a home affair against Bloomsburg. It was a cold, rainy day, and neither offense was able to come up with a goal. For every offensive chance came a mishit, save, or the toughest of them all, a post. The Rams held a 20-9 shot advantage, but it felt like the Huskies were the ones getting the closest to scoring; thankfully, they gained a bad habit of missing the net.

The case of the misses was contagious as the Rams faced the same struggles, only getting seven shots on goal of their 20.

The tie meant the team was out of contention for home field advantage throughout the playoffs.

They chose thought to shift their focus quickly for their next game against Seton Hill University. With the opportunity of a bye week still at hand, they knew they couldn’t get let down by their previous result. They made sure not to let the game slip through their hands, posting a well-fought victory 3-1.

One of the team’s captains would prove to be the game changer as he accounted for two of the three goals with senior Miguel Ross making a difference himself. Junior Brett Glasco was the first of the duo to make his presence felt, scoring in the 11th minute off a well-placed shot that glanced off a defender and snuck past keeper Auston Iddon.

The Griffins would answer in the 32nd minute on a cross by Colin Watson that would be headed in by Curtis Gallagher. The goal was Gallagher’s 10th of the season and drew the match even.

The second half called for Ross to step up, and that he did, scoring his fifth goal of the season on an assist by Glasco. Taking a page out of the Griffins’ playbook, the two would connect on a cross, with Ross being the benefactor knocking in a header for the game-winning goal. The goal ties Ross with Colin Hester for the team lead in goals, each with five on the year.

The Rams would get an insurance goal in the 83rd minute, as Glasco would continue his strong night by netting his second of the evening. Ross was yet again involved in the play as well, recording the assist on the 2-on-1 opportunity.

In spite of the scoreboard, it was a close matchup. In fact, Seton Hill held an advantage in shots 16-12, but failed to make the most of their chances. With the loss, Seton Hill falls to 7-4 in PSAC play, but they will play on in the PSAC tournament against California University of Pennsylvania.

As for West Chester, they will be awaiting the result of Gannon and Millersville in a quarterfinal matchup. Earlier on this year they lost to Gannon by a score of 2-1, and played to a scoreless tie with the Marauders. The match will be played on Friday, Nov. 4.

Ryan Hunt is a fourth-year student majoring in communication studies. He can be reached at RH803937@wcupa.edu.