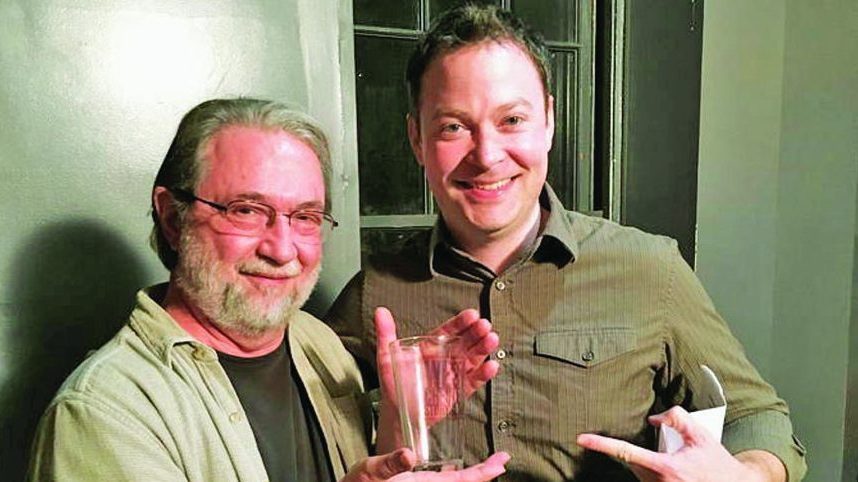 Once a month, people from all over Chester County convene at Side Bar and Restaurant to share anecdotes and narratives to an eager, awaiting crowd of locals. The West Chester Story Slam brings together people who have tales to tell and an audience that is ready and excited to listen to them.

I attended my first Story Slam last week and it lived up to everything I had been building it up to be for the past three years. To understand where my fascination started, we must rewind to my freshman year at West Chester University when I had an adjunct professor for my research writing class—Luke Stromberg.

Stromberg had offhandedly mentioned in class one day that he was involved with something called a Story Slam. This statement fell upon the uninterested ears of my fellow classmates, but I decidedly inscribed a mental note in my brain. I went back to my dorm once class was over and eagerly scoured Google to find out more. I ended up signing up for the Story Slam’s email list, which has since been sending me monthly newsletters about the events.

I never gave much thought to going back, mainly because the slams are held at Side Bar and I feared that attendees had to be old enough to drink in order to share stories or at least listen to them. But having recently celebrated my 21st birthday, one of the first things I wanted to cross off my list was going to a West Chester Story Slam. So I convinced my close friend Katie Brown to accompany me to the Tuesday, Sept. 13 slam, even though she had no idea what it was going to entail.

We arrived at Side Bar with a few minutes to find seats and get drinks. I actually saw my journalism professor, Chuck Bauerlein, and (somewhat uncharacteristically) went up to him to shake his hand and make awkward small talk. Bauerlein eventually took the stage and told what I thought was one of the night’s best stories.

Then, the moment came for people to go up to the microphone and tell their five-minute story pertaining to that night’s theme, “Risk!”

Jim Breslin, who founded West Chester Story Slam back in 2009, told the night’s first anecdote and received a warm response of laughter and applause.

Those brave enough to get behind the mic must keep their stories to about five minutes while making sure they relate to whatever theme that night’s show has. Then, judges who are scattered around various tables of the restaurant will judge the speaker from one to 10 based on both content and delivery. The winner of the night then receives a miniature (yet noble) trophy and the chance to compete in November’s Grand Slam, in which all of the winners battle it out in a war of words to take home bragging rights and the title of “Best Storyteller in West Chester.”

The first half of the night had stories that were both seriously funny and just plain serious. Then, during a five-minute intermission, Katie and I ventured outside to grab some fresh air. We ended up talking with a guy who had just told his story onstage, and eventually those five minutes turned into 10 or 15. We rushed back upstairs, the second act already underway, and anxiously awaited what the rest of the night had in store.

Once everyone who signed up had told their personal tale about risk, the final scores were tallied and the winner was announced. Incidentally, Katie and I were outside talking with our newfound friend while the winning story was being told. So it goes.

We ended up having a great time, not just because we were able to relax and have some beers on a school night, but because we heard some really amazing storytelling and had conversations with people we probably never would have met otherwise.

Did I mention that the two of us were the youngest attendees?

The fact that we were surrounded by people who had years of life experience compared to us could have very easily made the slam an uncomfortable event. But it made the night that much better when we were able to connect with a few storytellers at the end. In some ways, the slam bridged the gap between us millennials and those who are twice our age. I have to say that after being constantly surrounded by 20-somethings in this fishbowl that is college, it was refreshing to have some sincere conversations with another generation.

Katie and I are already planning to go to the October story slam, which will be featuring the theme, “WTF.” For more information and history on the slams, and for how to buy tickets or listen to their podcast, check out www.wcstoryslam.com.

Three years in the making and I still cannot get over how amazing my first Story Slam was. I look forward to becoming one of those loyal and eager locals for the rest of my time here at WCU. Sometimes patience (and being of legal drinking age) really does pay off.

Rachel Alfiero is a fourth-year student majoring in communication studies with minors in Latin American studies and Spanish. She can be reached at RA806657@wcupa.edu.