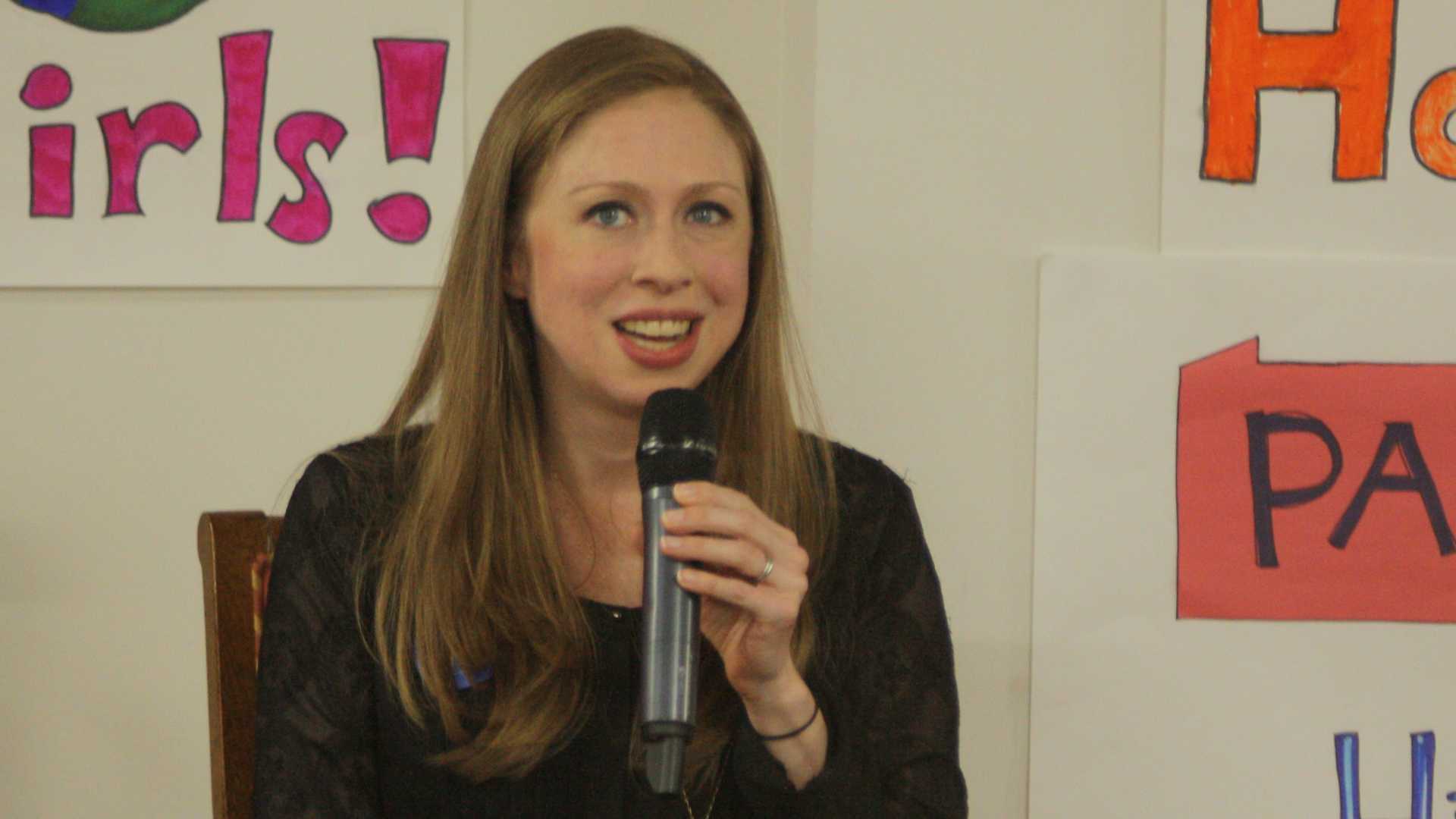 West Chester Mayor Carolyn Comitta presented Chelsea Clinton with a key to the city prior to her speech.

“I think of this as a key to the future,” said Comitta, “and the Clinton family is a key to our future.”

“We need elected officials who can work with everyone to make a better world for our children,” Comitta said.

Chair of the Chester County Democratic Committee Brian McGinnis also attended the event. Both were personally thanked and recognized by Chelsea Clinton.

Around 50 people were into the meeting room at Hillary Clinton’s campaign headquarters on West Gay Street to hear the former – and possibly future – president’s daughter speak.

“I’m happy to hear a young advocate speak,” said Michael Niemeyer of East Goshen. “Like her parents, she is eloquent in that respect.”

The Trump rally drew most of the campus’s attention, but dedicated Hillary Clinton supporters still showed to hear Chelsea Clinton and show their support through phonebanks and door-to-door canvassing.

“(Hillary Clinton) is one of the only candidates that has a clear, precise plan,” said Owen Moore, a senior criminal justice major. “She’s not offering promises. She’s not running a demagogue campaign.”

While some attendees were solid in their support of Clinton, others, like Tom Vee of West Chester, were still hesitant.

“I wanted to see the Clinton family in person. I hear a lot about them in the media, and I want to peg them down for myself,” Vee said.

Chelsea Clinton began her speech by declaring, “This is the most important presidential election of my life.”

Chelsea Clinton voted for her mother earlier this week in New York.

“I didn’t know I could care more about politics until I became a mother,” she said.

Chelsea Clinton, who is expecting her second child, commented that she was “quite visibly pregnant.”

“I worry that everything I care most about is at risk” Clinton said. “We need to build upon the progress made by Obama.”

Chelsea Clinton spoke highly of the Affordable Care Act and recalled her mother’s advocacy for the program in the early nineties.

“I remember in ‘93 and ‘94, when my mom fought for universal healthcare,” she said. “I don’t think I’ve ever heard my mom say, ‘I’m tired.’ We have to continue to fight for progress, for our children.”

According to Chelsea Clinton, Hillary Clinton advocated strongly in favor of the Children’s Health Insurance Program, which assists in providing coverage to children and mothers.

“In 2015, we had more pregnant women with access to prenatal care, able to give birth in safe environments than ever before in American history,” said Chelsea Clinton.

Chelsea Clinton promoted her mother’s bipartisan successes, saying, “We need a fighter, but we also need a problem solver.”

“We live in an increasingly dangerous world,” said Chelsea Clinton. “I hope my children feel about me someday as I do about my mother.”

Chelsea Clinton spoke for around 30 minutes and afterwards answered questions from the crowd, which included questions about mental health issues and clarification on Affordable Care Act reform.

On mental health issues, Chelsea Clinton said, “Not only should we invest in mental health services, we need to invest in research. We don’t know enough about how each person can best live up to their potential.”

Chelsea Clinton also addressed issues on mental health care for veterans, who have been long neglected in terms of mental health services.

“We should give our veterans vouchers to receive treatment in the private sector, not sit around and wait,” Chelsea Clinton said.

“We need to expand the statute so the government has the authority to launch investigations when drug companies aren’t just funding research, or covering costs, but exploiting people at their most vulnerable,” said Chelsea Clinton.

Some attendees were high school students, voting for their first time in the primary on Tuesday, April 26.

“I’m upset that most people my age don’t care about who our next president is going to be,” said a local high school student and Hillary Clinton supporter.

Chelsea Clinton attributed the problem to a lack of early civic education.

“Only 12 states currently require civics courses,” said Chelsea Clinton. “My mom was an early supporter of universal voter registration at 18. If we sent draft cards to every man when they turned 18, we can send voter registration to everyone.”

At the speech’s conclusion, many attendees set out to canvass both in person and over the phone.

“I’m so grateful for all you have done and will do to support my mom,” said Chelsea Clinton.

Moore considers Hillary Clinton to be “the most experienced and prepared for the job.”

“I just wish more college students would realize that instead of just ‘feeling the Bern’ because it’s popular,” said Moore.

Doug Myers is a is a fourth-year student majoring in liberal studies with minors in philosophy and journalism. He can be reached at DM793099@wcupa.edu.