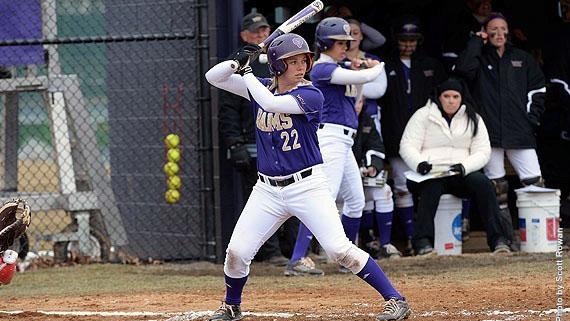 Team bonding outside of practice seems to be the trick to the Rams success on the field. Head Coach Diane Lokey feels that it is “important that everyone respects each other” and by actively bonding, the team gains this respect.

The Rams took on Winston-Salem State University in their second contest on Sunday, Feb. 21.

The Rams found themselves trailing for the first time this season after WSSU cleared the bases on a double to left field.

The Lady Rams would soon answer their deficit in the bottom of the fourth when senior captain Laura Altenburger blasted a ball over the fence for her first home run of the season. Junior Sarah Walasavage would find a gap for a double, ultimately advancing to third on an error. This would score sophomore Lauren Scarpato and junior captain Hayley Bollinger.

Altenburger’s hit would provide enough energy to illuminate the Rams bench as they went on to tie the score at three, but the Rams would not stop there.

The Rams’ defense would stop WSSU in the field in the following innings.

The Rams’ offense remained hot going into the sixth inning. Freshman Alyssa Herion hit her third home run of the weekend, scoring two. Ercolani and Hammer both had key hits, which scored two. The Lady Rams would go on to beat WSSU 10-3.

Sophomore Brooke Harner came in relief of senior Kat Erb to finish the game and shut down the WSSU offense. Harner only allowed one hit and no runs following their third inning rally.

After the Rams defeated WSSU, they had one final game of the weekend against the New Haven Chargers. Both the Rams and New Haven entered the contest with an undefeated record for the weekend.

Altenburger led off the second inning with a base hit to center field. After advancing to second on an error by the center fielder, sophomore Lexi Trumbetti was called upon to pinch run. Trumbetti would then advance to third on a wild pitch. Junior Micaela McSpadden grounded out to second, scoring Trumbetti.

After a scoreless four innings, sophomore Madison Kelly would blast a triple in the right field gap. Ercolani would then hit a single to center field, scoring Kelly. This gave the Rams a 2-0 entering the bottom of the sixth.

Sophomore Monica Twardowski and Kelly both had multiple hits, including a triple.

Amanda Houck pitched her second shutout of the weekend with four strike outs and only allowing four hits.

The Rams would go on to defeat the undefeated Chargers 2-0.

The Rams continued to make this possible after continuing their win streak. The Rams traveled to Murfreesboro, N.C. to face Barton College in a double header.

After a scoreless three innings, Twardowski would lead off with a walk and steal second to advance into scoring position for freshman, Alyssa Herion. Twardowski would score on an RBI single from Herion.

Altenburger would then go onto lead off the fifth inning with a double, scoring one. The Rams scored two more in the fifth to secure a 4-0 victory.

Harner was on the mound and threw her second complete game of the season. This was her first shutout of the season. Harner recorded nine strike outs and only allowed one walk.

In their second match of the day, the Rams were more patient at the plate.

Ercolani remained hot at the plate as she had three hits and a stolen base. She would also score three of the Rams’ nine runs. Kelly also reached bases twice with a double and two RBIs.

The Rams would go on to defeat Barton, 9-0, in a seemingly effortless fashion.

Houck completed her third game of the season, striking out nine and only giving up one hit and one walk. This would be her third shutout of the season.

The Lady Rams head to Clearmont, Fla., on Friday, March 4 for a week of games.

Monica Twardowski is a second-year student. She can be reached at MT814571@wcupa.edu.