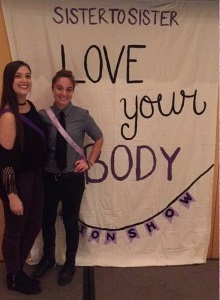 Ninety-one percent of women surveyed on a college campus have attempted to control their weight through dieting, according to a study published in the International Journal of Eating Disorders, while 22 percent diet “often” or “always.”

Students gathered in Sykes Ballroom on Tuesday, Oct. 13 to participate in the events of the Love Your Body Day Fashion Show hosted by West Chester University’s Sister to Sister Peer Mentors.

The ballroom was packed. Almost every seat was filled. The attendance of the night’s event was inspiring.

“We had a really great turnout, definitely a lot more people than last year, so this is exciting to see,” said Sister to Sister Vice President Jessica Sylvester, who also organized the event.

The evening began with brief introductions and the showing of a Dove “Onslaught” commercial that brought to light the media’s role in defining beauty standards from a young age. It urged viewers to “talk to your daughter before the beauty industry does.”

The crowd was then led through a meditation that included breathing exercises intended to relax the audience and put their minds in a positive space.

“We get to celebrate our bodies. We get to thank them, and we have these wonderful men and women to show and share with us their love for their bodies,” said Mathieson. “Shout out to all the men in the room. A few years ago, we didn’t have this male support.”

The fashion show featured about 20 students involved in sororities and fraternities, as well as two women from BodyPeace, another positive body image organization on campus.

The focus was on the functional beauty of the human body, and each participating student modeled a body part they loved for reasons other than physical appearance, such as their eyes, legs, ears and feet. “Legs because they carry me from place to place” and “they allow me to ride my horses” were examples given by two women.

Jessica McTaggart, a student and model for the fashion show, chose to feature her smile “because it has the ability to impact someone’s day in a positive way.”

“I think the greatest thing this year was having so many guys come out and participate in the fashion show with the ladies,” said Sister to Sister President Olivia Miller. “Loving your body isn’t just a female issue. It’s important that we think about it as both genders.”

Several men walked in the show, and the audience was a blend of male and female students that cheered on their peers with applause as each model strutted down the runway to loud, upbeat music booming over the speakers.

After stepping off stage, student Morgan Gottel, who modeled her hair because “it allows her to express herself,” said, “I was nervous at first, but it was really a neat experience to get up there and show others what you’re proud of. It’s nice to have a lot of support while you’re on stage.”

Students attended for several reasons such as to show solidarity and have a fun time.

“I came to the Love Your Body Day Fashion Show tonight to support my friends walking in the show,” said student Megan Bresnahan. “I think it’s brave to stand up and be an example of someone who loves and appreciates their body for what it allows them to accomplish.”

Another video called “50 people, what would you change?” was shown that asked people of various ages ranging from toddler to adult what they would change about their bodies if they could choose one thing. Each adult hesitated to answer, but they ended up listing physical attributes. The children asked for things like shark teeth and wings, while an elderly woman expressed gratitude for her wrinkles and white hair, because without them “it wouldn’t be me.” The video challenged the audience to think about the way they look at themselves.

The audience was left with a challenge: “To spread the word about the hazards of the media’s narrow beauty ideals and objectification/sexualization of women and men. To think critically about the images boys and girls see every day instead of passively accepting them.”

Afterward, Sister to Sister Peer Mentors offered uplifting words of advice, which included: “Count your blessings, not your blemishes” and “Think of all the things you could accomplish in the time you spend worrying about your body.”

According to Miller, this was her second year running the event.

“It just gets better every year,” said Miller. It’s always exciting to see how it turns out.”

“We’ve been working on planning for three months, so I’m very pleased with the way it all came together,” said Sylvester. “I think it went really well and the events ran very smoothly.”

Sister to Sister is a peer mentoring program which aims to promote healthy body image and spread awareness regarding eating disorders to the women on campus. The organization strives to educate their peers about the importance of healthy attitudes and behaviors in hopes that they will learn to feel better about their bodies and stop defining their self-worth based on their appearance.

Megan Monachino is a fourth-year student majoring in English writing with a minor in journalism. She can be reached at MM783809@wcupa.edu.