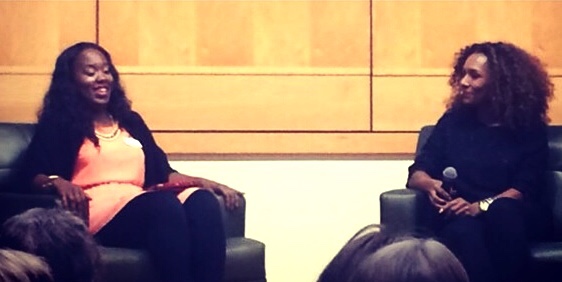 After a copious amount of hard work and dedication, Aneesah Smith, Assistant to the Vice President of Student Affairs, made it possible for author and activist Janet Mock to grace West Chester University with her presence on Saturday, Oct. 11 at 3 p.m.

Since 2011, when Mock, an editor for People.com at the time, first shared her story of growing up as a transgender individual in the magazine Marie Claire, she has traveled across the United States to speak out about her journey.

“What really inspired [my traveling] was young people who read my story.  A lot of my Twitter following, my Facebook following, and my Tumblr following have requested me on their college campuses,” said Mock.  “It’s been a powerful journey.”

Mock is also known for starting the social movement #GirlsLikeUs, a campaign that, according to her website, “empowers trans women and celebrates the diversity of womanhood,” in 2012.

Mock was born in Honolulu, Hawaii, but moved to Oakland, California, at a young age to live with her father.  She spent several years of her childhood there before moving back in with her mother in Hawaii.  Mock was grateful for this, as she found the environment to be more accepting.

“In Hawaii, there’s a space for outside the gender binary, where you can kind of be in the middle,” said Mock.  “It was completely empowering for me to have that as a teenager.  I didn’t really know who I was and was still discovering myself.  I hope that we can create more space for people to have that freedom.”

Mock released her autobiography “Redefining Realness: My Path to Womanhood, Identity, Love & So Much More,” which made The New York Times Best Seller List, in February of 2014.

When she visited West Chester University, Mock spoke in Sykes Theater, where LGBTQA President Lauren Conwell interviewed her and asked questions on behalf of the audience.  Many of these questions pertained to “Redefining Realness” and Mock’s work as an advocate. According to Conwell, Mock’s “whole aura was welcoming.”

“She just has this air about her that’s very calm and comforting,” said Conwell. Although Mock had a friendly demeanor, Conwell added that “being on stage with her was so surreal.”

Conwell, who discovered Mock several years ago while educating herself on the issues trans people face, admires her for how outspoken and open she is.

“That’s what really inspires me because each individual person has their own story, their own struggle, but it’s what you do with that story and with that struggle that makes you better,” said Conwell.

Mock addressed problems that transgender people struggle with daily, such as workplace discrimination, a lack of bathrooms where they feel safe, inclusive student organizations, and their names and pronouns not being respected. Mock stressed that people should have the right to declare and define themselves without hostile and violent reactions.

In addition, Mock discussed how transgender people fight marginalization and exclusion even within the LGBTQIA community and the importance of intersectionality, which Conwell strongly agreed with.

“We’re fighting for our own rights, but then we also police others, which isn’t what we should be doing at all,” said Conwell.

“I read “Redefining Realness” last semester and getting to hear Ms. Mock speak was a great experience,” said Brown.  “She was very down to earth. It was wonderful to meet her and to hear her take on a variety of issues, including feminism, the LGBTQIA movement, and her tips for awesome hair.”

Another topic that Mock focused on was self-love.  When someone in the audience inquired about Mock’s confidence, she spoke about the importance of centering herself and shutting out expectations.

“I knew the first step in my journey was loving and embracing myself,” Mock told the audience.  “When you’re in doubt, acknowledge your truth of how you’re feeling.”

Following Mock’s discussion, she graciously chatted with the people who came out to see her, took pictures with them, and signed their copies of “Redefining Realness.”

After the book signing, Mock attended the Multicultural Conference as a keynote speaker.  There, she talked about many similar subjects, including race, gender, and feminism.

According to Conwell, the hope was to “open the minds of the multicultural community.”

Mock, who now works as a contributing editor for Marie Claire, noted that her true passion was writing. “At the end of the day, I’m a storyteller,” said Mock.

According to Conwell, Mock is quite successful as one. “She is a true writer,” said Conwell.  “She vividly paints a picture [in “Redefining Realness”].  It’s like a movie, almost.”

According to Mock, she would like to write more for television in the future. “I think that television’s such a powerful and intimate platform, and so I want to tell stories through that medium,” said Mock.

Mock touched on how trans people are misrepresented onscreen and aspires to correct it.

“My quest and goal as a writer is to make people feel,” said Mock.  “I think that there’s so much in the way that the media portrays trans people.  There’s a lack of humanity, and so I want to shed light on that humanity and show that trans people are just like everyone else.”

Ultimately, Mock aims to spread awareness of and gain equality for trans people.