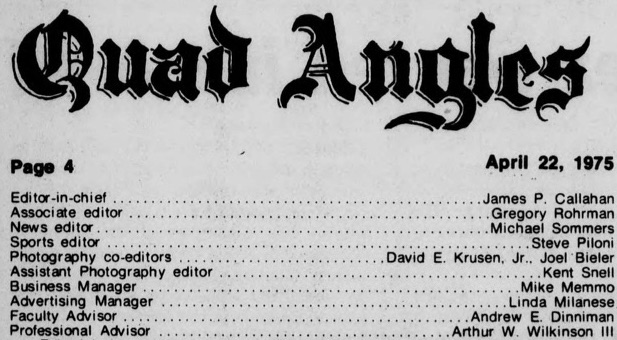 Jim Callahan, a former news editor, editor-in-chief, and reporter for The Quad, passed away in late April. He worked for The Quad in the 1970s, back when it was known as The Quad Angles and when West Chester University was West Chester State College.

He first worked for The Quad Angles as a reporter as a freshman, taking initiative to work hard and get the story. In the 1970s, the paper focused on a lot of hard news, as the Vietnam War demonstrations were affecting both the campus and greater community. Callahn was a political science major and a member of the class of 1974. In his last year, he was in the editor-in-chief of The Quad Angles.

His brother-in-law Wayne Heinze said that Jim went on to “make [journalism] his life’s work.” Callahan went on to be a reporter at The Daily Local News, West Chester’s local newspaper. He worked there for twenty years.

Before that, he worked at The Record and the Connecticut Post, where he won awards as a journalist.  He also worked as an editor for the Bridgeport Light.

According to an article written by Michael P. Rellahan which ran in The Daily Local News in April 2015, he was best-known by his last name in the newsroom. Clearly, based on the many, many quotes from friends in the article, Callahan was well-known and well-loved in the community.

The same article explains that Callahan was known for his attention to the 5 W’s – who, what, when, where, why. As any journalism knows, those are the focus of a good news story.

Though Callahan was ill for some time in late 2014, he still wrote for the paper.

His last story – which was on the front page – was about a fire at The Pretzel Factory on North Church Street.

Interestingly, his first story for The Quad Angles was also about a fire in the cafeteria.

According to his obituary, he was acknowledged for his service as a newsman on Congressional Record by U.S. Representative Ryan Costello (PA-6) on April 13th, 2015.

On April 14th, Jim was also honored by his favorite team, the Boston Red Sox, with a message on the scoreboard at Fenway Park, his obituary states.

His brother-in-law, Wayne Heinze, said that he felt Jim would be smiling at the thought of his brother reaching out to The Quad now.

Theresa Kelly is a fourth-year student majoring in English literature  secondary education. She can be reached at TK780615@wcupa.edu.