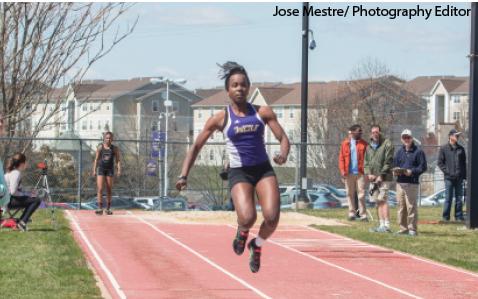 The Golden Rams Track and Field team headed to Shippensburg Early Wednesday afternoon for the annual Quad Meet. With the PSAC championships rounding the belt; many of our Golden Rams went into their performances focused, envisioning a day of success in each of their own events.

The Women’s 4×100 meter team consisting of Amira Warrick, Emily Magnant, Janna Wilson, and Alexus Wike finished their race second, with a time of 48.58. Magnant, a freshman, ran a few events on her own and performed at her best each time. In the 200 meter dash, Magnant finished second clocking in at 25.73 seconds. This freshman is a key part to the women’s sprint team.

In the 400 meter dash, the top seven finishers belonged to two of the same schools, Shippensburg and West Chester. The Lady Rams finished the race together with a mere two second time difference between places fourth and seventh.

Victory came in the sole form of Caroline McLaughlin. Excelling far beyond in front of Shippensburg, the runner-up, McLaughlin, topped the 400 meter hurdles with a time of 1:09.40 for the Golden Rams.

In total, the Lady Rams finished with 82.83 points, resulting in third place overall.

Top performances all around the track led the men’s team to finish second overall, with a total combination of 114 points.

The men’s 400 meter dash gave another powerful performance by snatching up gold, silver and bronze from any other possible takers. Saybrim Medina led the crew strong and finished at 49.64, Dix came in right behind clocking in at 50 seconds even, and Jim McDaid stayed with the pack finishing at 50.23.

With the West Chester University Open coming up in a week, many of our Golden Rams are practicing perfectly to ensure their best performances. PSAC championships are coming up at the end of the month and while some athletes are tuning in and improving their steps, others are hoping to qualify soon.

Miguel Bauzo is second-year student studying communications with minors in psychology and journalsim and can be reached at MB797596@wcupa.edu