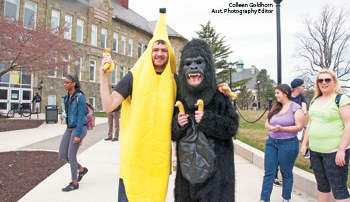 On Wednesday, Apr. 15, students filled the Academic Quad playing games and dressing up as bananas to celebrate the 19th annual Banana Day.

Though no one is quite sure about its origin, the mystery of Banana Day is part of its appeal.

“My favorite part about Banana Day is just the sort of my mysterious tradition about it; no one really knows what Banana Day is when they come to West Chester, and you don’t really get to experience it until your first Banana Day,” said junior Zoe Farquhar.

Ships and sailors, banana toss, musical chairs, and charades were just some of the many games students played trying to win a coveted Banana Day t-shirt. Other students took advantage of the nice day and crowded Academic Quad to join in the fun and play their own games such as Kan Jam and ladder toss, while others ate the free bananas they were offered as they walked to class.

The Student Activity Council (SAC) organized the entire day. Nicole Bamberger, secretary of SAC and coordinator of Banana Day, said, “There is a lot of behind the scenes work that goes into planning Banana Day.”

In order to make Banana Day happen, SAC plans and preps for months in advance. They collect co-sponsorship from organizations on campus to help raise money for the t-shirts. Once that is done, they have to find a “design worthy of being that year’s Banana Day t-shirt” and order them. They then have to divide the volunteers into their jobs and locations, which is the most “grueling” part of the planning process. And of course, they have to order the bananas, said Bamberger.

This year, a little over 1,000 t-shirts were given away to students during the day and “the amount of giveaway continues to increase every year,” said Bamberger. The t-shirts are arguably students’ favorite part about Banana Day. Students get very competitive while trying to win them. This year’s t-shirts were purple and said, “Think outside the peel” on the front.

The Purple and Gold club hosted Banana Night, giving anyone who missed Banana Day the chance to still partake in the fun. Students played games and competed for a t-shirt, but this year, the Banana Day and Banana Night t-shirts were different.

Banana Day proved to be successful again this year, leaving students excited to see what’s in store for next year’s big day. The origin may be a mystery to most students, but the tradition of Banana Day doesn’t seem to be ending anytime soon.

“It is important to keep holding Banana Day because it’s a day that West Chester University’s student body can come together and celebrate something together,” Bamberger said. “It’s a day filled with fun games, food, and t-shirts, a great stress reliever that many students could use this time of the year. It’s a tradition that I hope continues to stick on West Chester University’s campus for years to come.”

Colleen Curry is a fourth-year student majoring in communication studies. She can be reached at CC763513@wcupa.edu