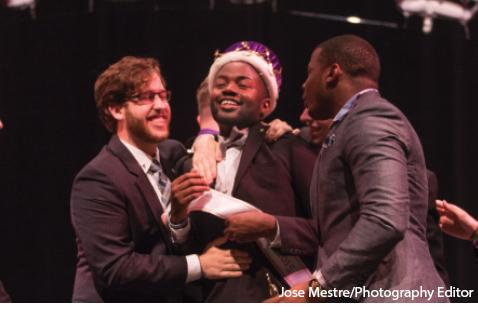 On Friday, Apr. 17, the Student’s Activities Council (SAC) hosted Mr. WCU 2015, which was a mission to unveil “WCU’s Man of Mystery.” More than 500 students, friends, and family were in attendance at Emilie K. Asplundh Concert Hall for the annual men’s competition.
The competition began as Mr. WCU 2014, Jimmy Peifer, welcomed the crowd to the event and introduced the evening’s judges and hosts. The judges included: Todd Marcocci, an Emmy Award Winning producer and President of Under the Sun Productions Inc. based in West Chester; Paige Budin, a WCU alumni who served on the Student’s Activities Council for three years and is currently a special education teacher at Cheltenham Elementary School; and Justin Brown, who has devoted his life to educating campuses, businesses, and communities about college and pursuing higher education and currently works for Residence Life and Housing as a Residence Director in Goshen Hall
“I am so impressed that these young men have the courage to appear on stage in front of the WCU community,” said Marcocci. “I know when I was a student at WCU, I would have never had the courage to do what they do, so in a way, all of the guys have accomplished a major moment in time.”
As a judge since the first Mr. WCU competition, Marcocci will be looking for confidence, professionalism, sincerity, and attention to detail in the contestants.
The evening was cohosted by Paige Elliot and Justin Sochovka, WCU alumni and the former co-hosts of WCU Weekly. Elliot now works as an Associate Executive for SAP, and Sochovka works as an on-air guest for QVC where he presents electronics to a national audience.
After opening introductions, the contestants surprised audience members by revealing themselves among the crowd and performed an opening dance number featuring all 11 contestants and their escorts.
This year’s competition was mystery-themed, and the contestants performed a fun-loving dance number featuring songs from Mission Impossible, Pink Panther, and Kim Possible.
The next portion of the competition was an introduction of the contestants: Matthew Miller, Devin Kirby, Gary Prince, Tarik Williams, Matthew Keller, Ian Mix, Matthew Nolt, Scott Martin, Kody Pasqualichio, Carlos Negron III, and Louis Holzman.
Each contestant took the stage to formally introduce himself and his selected platform to the audience. Contestants’ platforms included charities and organizations such as The Hero Campaign, The Susan G. Komen Foundation, Outreach to Urban Youth, and The American Foundation for Suicide Prevention.
The contestants also answered the question, “Why are you West Chester’s man of mystery?” The contestants all had clever answers, giving responses like, “because Scooby Doo got nothing on this mystery machine” and “It doesn’t matter how many Blue’s Clues you have because I’m one smooth criminal.”
Next, the contestants each had the opportunity to show off their secret weapons and perform their talents. The contestants showcased their personalities through a multitude of different talents including tap dancing, creating a painting in under five minutes, a live band performance, stepping and strolling, and giving a virtual tour of WCU.
After the men finished their talents, there was a 15-minute intermission in which audience members were encouraged to place their votes for the People’s Choice superlative awards. All of the proceeds from the evening’s ticket sales would be given to Mr. WCU 2015 to support his selected platform.
Following the intermission, the contestants took the stage accompanied by their escorts to show off their 007 attire. During this section, Elliot and Sochovka asked each contestant to pull a random question out of a bucket to answer for the audience. Questions included “What’s one thing you want to change in the world?”, “What brings you the most happiness in life?”, and “Why should you be the next Mr. WCU?”
As the judges made their final decisions, two a capella groups performed: The Suspensions, a WCU all-male a cappella group, and Under a Rest, a WCU co-ed a cappella group, and entertained the audience.
After the musical performances, the judges had made their decisions, and it was time to narrow down the 11 candidates to the top three. The top three contestants were announced: Tarik Williams, Kody Pasqualichio, and Scott Martin. Then, these three contestants had the chance to tell the crowd more about their chosen platform and why it was significant to them.
After each had a chance to share his answer, it was time for the superlative awards. Matt Miller won Most Dedicated, which was chosen by the Student’s Activities Council. Louis Holzman won People’s Choice, which was voted on by audience members in attendance. Matt Nolt won Most Photogenic, which was also chosen by the Student’s Activities Council. Gary Prince won Escort’s Choice, which was voted upon by all the escorts and Ian Mix won Mr. Congeniality, which was chosen by his fellow contestants.
Before the judges announced who would be Mr. WCU 2015, the contestants, their escorts, the Student’s Activities Council, and Mr. WCU 2014 participated in a closing dance number to the song Shut Up and Dance by Walk the Moon. Then, finally, the moment came to crown Mr. WCU 2015.
Second runner-up went to Kody Pasqualichio.
“If you are thinking about doing [Mr. WCU], you have to just do it. I had an extremely busy semester, but I am so happy I stuck it out because it was one of my most memorable experience here at West Chester!” said Pasqualichio.
First runner-up went to Scott Martin, leaving Tarik Williams to be crowned Mr. WCU 2015.
“I’m extremely honored and humbled to be Mr. WCU 2015,” said Williams. “I love the chance to express myself and perform on stage. However, there is nothing better than being able to represent West Chester University, my platform [Lucy Fund for Metastatic Cancer], and make my friends and family proud.”
Nicole Danik is a fourth-year student at West Chester University. She can be reached at ND766917@wcupa.edu.