Women’s lacrosse turns up the heat; wins three of four 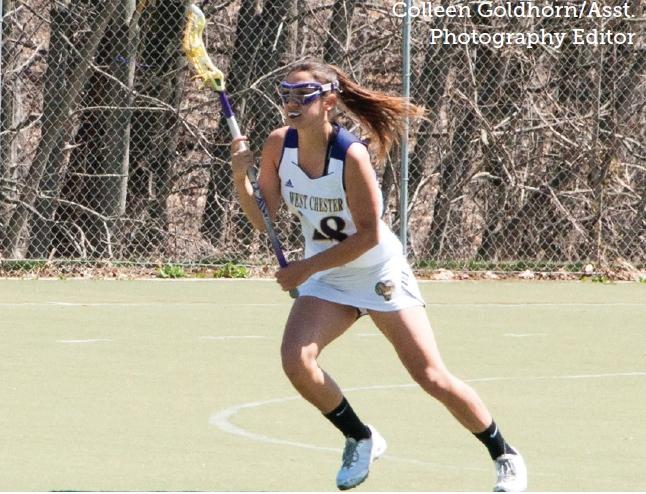 The West Chester University women’s lacrosse team bounces back from a tough start to the season to win three of their last four games, including a victory over the No. 15 team in the nation.

West Chester came into the season with high hopes and a top-ten ranking in nation. However, they started the season in mediocrity with a 4-3 record, losing games they should have won.

It looked as if they were still trying to figure themselves out, and although they are still not exactly where they want to be, they are making strides to make a comeback into the top-ten rankings again.

Since the 4-3 start they are 3-1, with the lone loss coming at the hands of a road game at the No.2 team in the country, and currently undefeated Lock Haven. The other three wins were against Millersville, Gannon, and Seton Hill.

Seton Hill is the No.15 team in the country, so the 9-7 victory over them on Saturday was a big step forward for this team. West Chester sits at No. 19 in the rankings, but that is most likely soon to change when the new rankings come out in the beginning of the week.

The first victory was on the road against Millersville, and West Chester might have played their best lacrosse of the season. Leading goal scorer Erin Eckert added four goals to her total during this game, and she also added an assist on a Kristen Vath goal late in the second half.

West Chester got off to a hot start, scoring six goals in the first nine minutes to jump out to a 6-2 lead, and they never looked back from there. Eckert scored three of her four goals in that nine-minute span.

Other goal scorers for the Golden Rams were Hannah Cowan and Kristen Vath, who added three apiece, Ashley Pyle who had two goals while adding four assists. Kelsey Gumbert, Sarah Gebre, and Sarah Dennison each added a goal.

West Chester knew they had to have a big game against Millersville in order to try and gain some momentum to take on the No. 2 team, Lock Haven, the following week. Unfortunately, the momentum they gained was not enough to have them play their best game, as they were defeated by Lock Haven, 10-3.

It was a very tough match-up for the Golden Rams and they know they are going to have to work extra hard if they want to face-off against Lock Haven in the PSAC playoffs.

West Chester did bounce back nicely with back-to-back wins against Gannon and Seton Hill, both good lacrosse teams. The player that has really been helping out West Chester has been Eckert who scored five goals over the last two games, while adding two assists.

They will need to continue to play strong lacrosse as they head into the key stretch of the season with five regular season games remaining. Right now they stand in sixth place in the PSAC division, with their next game being on the road against Shippensburg, a game they should win. The game will be played Tuesday at 4 p.m.