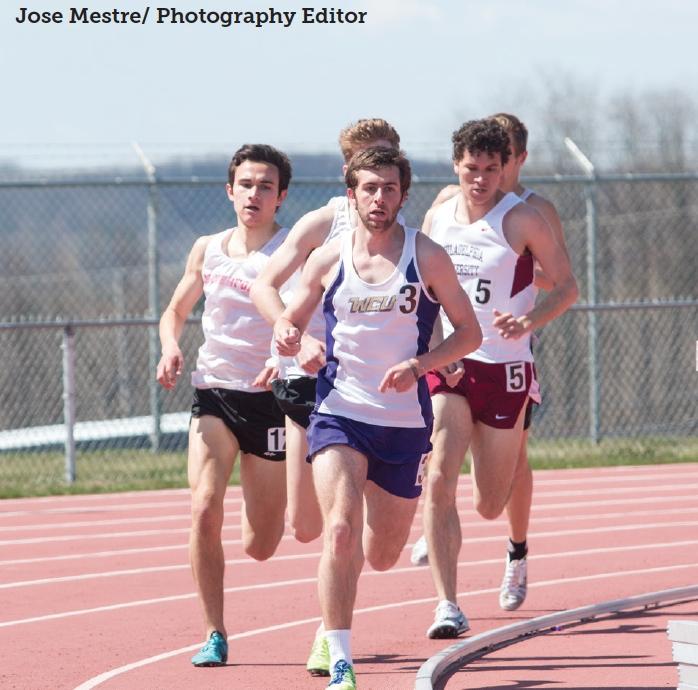 The West Chester University track and field teams earned 18 combined victories on a sunny Saturday afternoon at John A. Farrell stadium in the Bill Butler Invitational.

West Chester athletes dominated the field in almost every category, with wins coming in long distance runs, sprints, and jumps. Both the men and women’s teams posted some of their best scores of the season.

For the women, Amira Warrick, Janna Wilson, Emily Magnant and Alexus Wike finished first in the 4X100 relay, posting an impressive combined time of 49.22. Ebony Gratsy and Amanda Castellano jumped to victories in the 400-meter and 100-meter hurdles, running away with two more first place finishes for the Lady Rams.

In field events, the Lady Rams were unstoppable with six first place finishes. Lady Rams star Kayla Owens finished first in both her events, shot put and discus throw. Owens, a local product of Rustin High School in West Chester, has been dominant for the Lady Rams since her arrival four years ago. In her senior season, she has only grown, so far, on what is already one of the most impressive athletic resumes for a West Chester athlete.

Junior Logan Brenker pulled out a win for the Rams in the long jump, leaping 5.27 meters. Just behind Brenker, freshman jumper Sarak Konsenske finished in third place with a distance of 5.12 meters. Konsenske also finished in first place for the triple jump.

Sophomore LaBrae Lavelle grabbed a victory for the Rams in the high jump, clearing 1.58 meters. The 5’7 high jumper from Scranton Prep has been consistent in her jumps all season for the Rams. Devin Kerecman also placed first in the pole vault, giving the Golden Rams another victory.

The men combined for 10 first-place victories on Saturday, an impressive performance for the Rams. The Rams charged to wins in the 4X100 relay and the 4X400 relay. In the 4X100, Ghassan Dix, Alexander Foulke, Ryan Heimbach and Bryan Reice combined for an impressive time of 43.03 Dix and Foulke also teamed up with Golden Ram runners Shawn Young and Saybrim Medina in the 4X400, winning with a time of 3:17.72.

In the field, the men followed the women’s lead, winning six events. Junior Joe DeCecco was victorious in both of his events, with scores of 2.05 meters in the high jump, and 13.42 meters in the triple jump. DeCecco has been consistently solid for the Rams since last season, and has been successful in his efforts so far in 2015.

Mark Van Teyens climbed his way to the top for the Golden Rams, placing first in the 110-meter hurdles with a time of 15.49 seconds. Along with that performance, Van Teyens finished fourth in the 400-meter hurdles, trailing fellow West Chester hurdler Medina, who finished third.

Sophomore Jim McDaid finished sixth in the 800-meter run. McDaid led through most of the race, but a late push from a few runners resulted in his fall to the sixth spot. Despite his numerical finish, McDaid ran a solid race.

McDaid commented on his performance, saying “It felt good to come out and take advantage of a day with perfect weather and run a fast time. Now I know what I need to work on for next week in order to qualify.”

Sophomore Andrew Dombrowiecki rounded out the competition in first place, winning the 5000-meter distance run with a time of 16:6.6. Dombrowiecki’s win was the final event on the day, and an appropriate victory for the Bill Butler Invitational to end on.

Crunch time now approaches as PSAC Championships are just over the horizon. Next up the Rams travel to East Stroudsburg for the ESU All-American Invitational where they hope to continue the success they saw this past weekend.