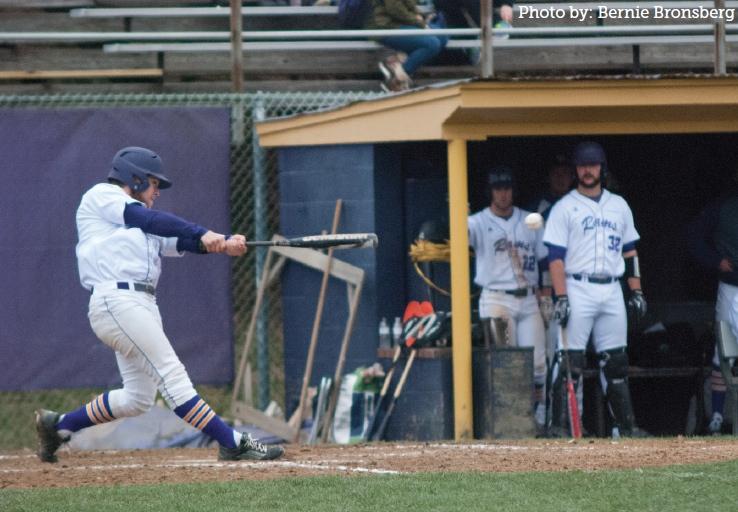 The West Chester Golden Rams are riding a nine-game winning streak heading into a doubleheader at home against Lock Haven, on Sunday, April 12, after winning both games of the double-header on April 11, by scores of 6-4 and 12-2.

The Rams’ last loss came with the first game of the Bloomsburg series on March 29. After that, they went on to win the series, winning the second game of the double-header on the 29th, and taking both games the following day.

During the first game on March 30, the Rams found themselves trailing 3-0 heading into the top of the 6th. They fought back, plating four runs in the inning, and held on to win the game 4-3.

Catcher Bill Ford started the scoring with a two-run homerun with nobody out. After a bunt single by Mike Gannon and a pair of singles by Drew Diehl and Dylan Tice, Justin Roman was able to find a hole, with two outs, scoring Diehl and Tice to give the Rams a lead.

“Our bats came alive in the last couple innings of game three with Bloomsburg,” said head coach Jad Prachniak. “The hitters had a good approach throughout the game, we hit well with two strikes and two outs.”
That’s all starter Andrew Gernert would need to grab the win, finishing with a complete game and seven strikeouts.

The Golden Rams carried their momentum from the first game into the second half of the doubleheader, with an absolutely dominating win of 22-3 over the Huskies. A three-run first inning put the Rams ahead early, later plating 11 runs in the top of the third, ultimately ending any hope the Huskies had of clinching a series split with West Chester.

“That was a turning point in the season for us,” said Tice. “That was the beginning of our hot bats.”

In a doubleheader against Mansfield University on April 4, West Chester won both games, 8-0 and 6-3 respectively. The bats aren’t the only thing that have come alive as of late, the Rams are getting some terrific performances out of their pitchers.[pullquote align=”right” speaker=”Dylan Tice”]That was a turning point in the season for us, that was the beginning of our hot bats.[/pullquote]

In the shutout win against Mansfield, starting pitcher Alec Schwartz threw a complete game, allowing only four hits, and walking just one. Even after a commanding shutout performance, Schwartz refused to take much credit.

“The guys behind me have been making some great plays for me, so that has given me the confidence to fill up the zone,” Schwartz said. “The coaching staff has done a great job calling pitches to keep the hitters off balance.”

Even so, Schwartz is the one actually throwing the pitches, and he is getting stronger as the season progresses, giving the Rams yet another arm in what is proving to be a very deep rotation.

“Our pitching staff has done a nice job of giving us a chance to win,” said Prachniak. “Schwartz has gone 13 straight conference innings without allowing a run, Nick Stallings is 4-0, Gernert and Matt Petrizzi both have a couple of wins in conference play. On any given day, those guys can give us an ace-like performance.”

In the second game against Mansfield, the Rams took an early lead with a run in each of the first two innings. Tice hit a solo homerun in the first to continue his hot streak at the plate, and Ford doubled home designated hitter Scott Lorback in the second inning.

The score stayed at 2-0 until Stallings, who started the game for the Rams, allowed a three-run homerun to Anthony Renz. Mansfield would not lead for long, as the Rams drove in four runs in the bottom of the sixth inning, to go on to a 6-3 victory.

“My teammates really came through in the bottom half of the sixth inning after I gave up the homerun. Everyone did what they had to do in order to get the win. It was a great team win,” said Stallings.

“We have been consistent in all facets over the last couple of weeks,” said Prachniak. “We are having good at-bats, pitching well, making some great defensive plays, and running the bases with purpose.”

It’s all starting to come together for the Golden Rams, right at the perfect time. They are within striking distance of the first seed in the PSAC East, currently held by Millersville, with a few weeks of conference games left to play. However, the Rams are keeping it all in perspective.

“We can’t get ahead of ourselves,” warned Tice. “We need to continue playing the single game that is in front of us, and trust that things will fall into place.”