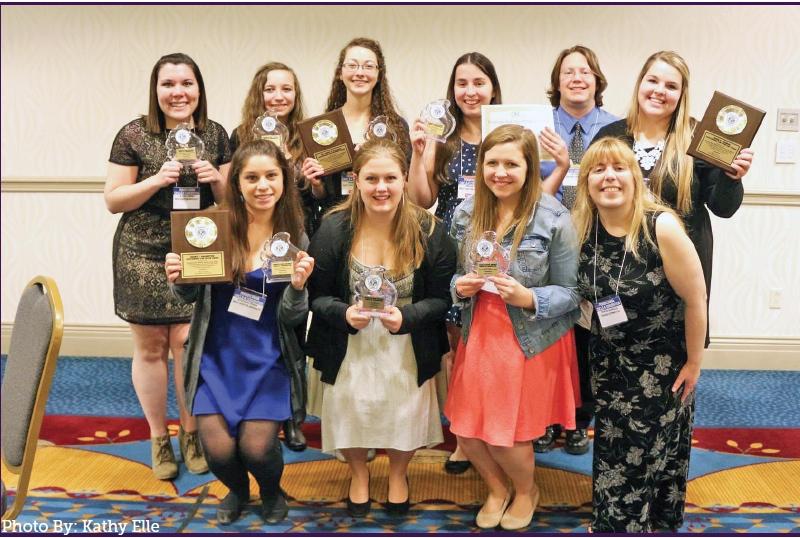 With the chance to interact with other clubs in the state and be recognized for their work, West Chester University’s Circle K attended the Pennsylvania Circle K 53rd Annual District Convention from Friday, March 27 to Sunday, March 29.

This year’s Dr. Seuss-themed convention was held at the DoubleTree Hotel in Monroeville, Pa.

On Saturday, March 28, following breakfast where the Circle K International President welcomed all of the clubs and presented some awards, the divisions (Black Diamond, Liberty, Colonial, Keystone, Snowbelt, and Three Rivers) split up for caucusing. This was when Circle K members running for the 2015-2016 District Board gave their speeches and answered questions.

After this, the workshops began. Every Circle K member went to three workshops, with three different options to choose from for each time slot.

The first one I went to was called “The 500 Hats of Convention,” where I learned about the basics of Circle K International, District Convention, and International Convention. Other workshops at this time centered on Circle K’s new District Service Project and Circle K’s preferred charities.

“The Art of Networking” was the next workshop of my choice. This session was led by Dan Conrod, Director of Delivery at Dale Carnegie Chicago, who discussed how to communicate and form connections with people.

District Governor Heather Christensen ran the final workshop, entitled “Oh the Thinks You Can Think.“ At this session, Circle K members from different universities exchanged ideas on how to promote our clubs and recruit new students.

Later in the evening, everyone gathered for the President’s Banquet, which consisted of Conrod as the keynote speaker and the presentation of various awards.

For our interaction with other Circle K clubs, we received the Interclub Award.

We were next honored with the David H. Baker, Jr. Outstanding Kiwanis Family Relations Award to celebrate Circle K and our bond with our Kiwanis Family.

The Best Sponsoring Kiwanis Club was presented to our very own West Chester’s Kiwanis Club for maintaining a working relationship with Circle K.

Thomas was also given the Ron and Luida Shearer Unsung Hero Award for the Liberty Division.

While Thomas attended District Convention when she was in Key Club, this was her first time at a Circle K convention. Thomas enjoyed the convention because “the people there were more serious about the idea of the club” in comparison to her high school experience.

“It was cool to see a group of people who are super passionate about service come together for one weekend,” said Thomas. “I loved learning how to get others involved in the work Circle K does.”

According to Thomas, one of her favorite parts was growing closer with the members in her own organization.

After the conclusion of the President’s Banquet, the Circle K members ended the night with a fun round of Quizzo.

On the morning of Sunday, March 29, everyone met up for the farewell breakfast. It was an emotional start to the day as Christensen gave her final address and the rest of the District Board retired. District Governor-Elect Taylor Spencer and the new 2015-2016 District Board were then introduced. Once Spencer spoke to the crowd and a few other presentations were given, the District Convention officially adjourned.

Circle K International President Kathy Elle, who is a fifth-year student studying psychology at the University of Alberta, had a great time at PACK’s District Convention.

“Each district that I have attended has ran differently, and so each has been unique in their district conventions,” said Elle. “I really appreciated the opportunity to participate in all of the activities and was able to really engage with the members.”

According to Elle, PACK has “some of the most friendliest members [she’s] ever met.”

“It was very easy to feel like I fit in,” said Elle. “I also enjoyed being able to reunite with some members I had met before and see them grow.”

Another aspect Elle liked about the convention was the balance between professionalism and fun.

“DCON is a time for business, but it doesn’t mean that we can’t get to know each other as members and friends,” said Elle. “Not many districts are able to incorporate fellowship as well as Pennsylvania did.”

Elle praised the enthusiasm of those who attended the convention and thought the turnout was “amazing.”

“The 2014-2015 District Board did a great job putting together a successful event,” said Elle. “If there were any flaws, I didn’t know about them.”

Casey Tobias is a first-year student majoring in women’s and gender studies. She can be reached at CT22683@wcupa.edu. You can follow her on Twitter @Casey__Tobias.