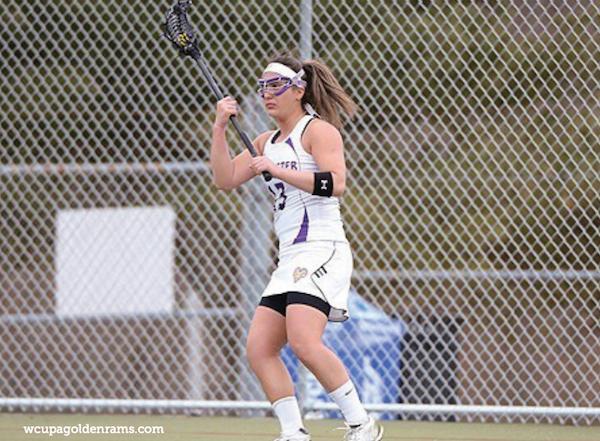 After a few tough losses in prior weeks, head coach Ginny Martino and the Lady Rams entered the busy days ahead in hopes of pulling out three huge victories, but unfortunately could only control a pair, falling to Mercyhurst University on the road, Saturday afternoon. The no. 7 ranked Lakers entered the contest 6-1, led by three-time all PSAC selection Rebecca Himes, and 2014 all PSAC selection Jenna Schlagenhauf.

West Chester knew this would be one of their biggest challenges of the season. Despite giving their best effort and starting strong, the Lakers were too much for the Lady Rams to handle, falling 12-4.

A quick two-goal start gave West Chester the 2-1 lead early on, but after a quick turn of events Mercyhurst took the lead and never looked back. Schlagenhauf led the way for the Lakers, scoring three goals on five shots. Himes also contributed with a goal and assist of her own. Senior goalkeeper Rebecca Muscella stopped five shots between the pipes for the Lakers.

The Lady Rams got their four goals from four separate players on Saturday, including sophomore Ashley Pyle, juniors Erin Eckert and Caroline Kuchinsky, and senior Sarah Dennison. Despite holding the lead early on, the Rams could not keep their play consistent enough to keep up with the flowing offense of the Lakers, which played a key component in the loss for West Chester.

Earlier in the week, the Rams faced two more conference challenges that were handled quite differently. One win came with ease, while the other turned into a nail-biter.

A depleted and struggling Kutztown team traveled to Vonnie Gross Field on Tuesday to take on a hungry West Chester squad. From the first whistle, the Lady Rams controlled the ball and never once looked back, winning 14-5. Four West Chester players scored two goals individually including Eckert and Pyle, with additions from sophomores Kristen Vath and Kelsey Gumbert. Six players scored individuals goals while senior Dina Cifelli added five assists, moving her to fifth best in the PSAC with assists per game. Merrilee Viguers earned the start in net, where she stopped nine shots and really held down the defensive anchor for the Rams. The young freshman seems to be beginning to get more comfortable in net with some of the more experienced players surrounding her.

The total dominance only lasted a few days, but the Ram victory streak carried on, beating Slippery Rock on the road two days after the Kutztown victory. The win was no walk in the park, as West Chester pulled out the victory in double overtime. Dennison found the back of the net with just less than four minutes left in the second overtime period.

The Lady Rams led with 12 minutes remaining, but a push from Slippery Rock tied the game. After no result coming from the first overtime, West Chester was able to finally capitalize and seal the hard-fought victory. Sophomore Ashley Pyle, who has rushed onto the scene as one of the Rams’ strongest players, netted four goals and added three assists, while Junior Hannah Cowan added three goals of her own. Eckert and Vath added a pair of goals, each, in the big win for the Golden Rams.

After Saturday’s loss to Mercyhurst, West Chester will travel to Millersville University to take on the Marauders in a battle of PSAC rivals. The Marauders, despite dropping four of their last five and starting the season 3-5, are a strong team that West Chester will need to take seriously. If the Lady Rams want to turn their season around and jump on the train of consistent winning, it will start with a dominant showing this Tuesday against the Marauders.