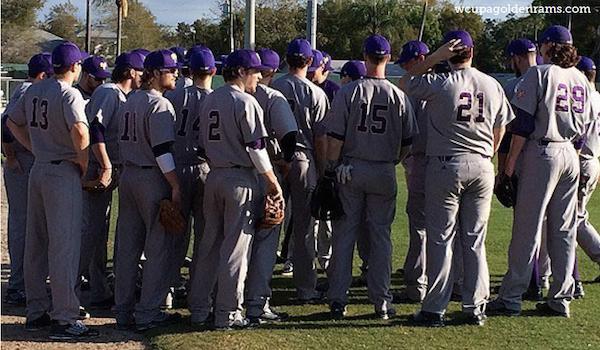 As the calender turns to March and winter draws to a close, the door opens to spring. And with spring comes baseball.

West Chester has experienced nothing but success since head coach Jad Prachniak took the helm prior to the 2012 season. That year, the team won the Division II National Championship. The following year, the Rams advanced to the PSAC championship game, but lost to East Stroudsburg 7-1. Last season, the Rams qualified for the PSAC playoffs yet again before losing to Mercyhurst in the first round.

“The number one goal is get to the post-season,” Prachniak said. “That starts with the PSAC tournament. But we’re hoping to do enough work during the regular season to put ourselves in a position to get to the NCAA tournament.”

West Chester opened up conference play this past week by splitting consecutive double-headers on Tuesday and Wednesday against Millersville University at Serpico Stadium.

On both days, the Golden Rams dropped the first game to the Marauders, but were able to answer back with a win in the following game.

“Ultimately you want to win series. If you can win three of four or sweep, you really end up feeling good about the weekend,” Prachniak said. “But, the split was a pretty good split to be able to bounce back in both games.”

In the first game on Tuesday, the Rams and Marauders were deadlocked 0-0 heading into the top of the sixth inning, before the Marauders belted two homeruns off Rams right-hander Joe Gutowski. The first was a two-run homerun by Millersville’s third baseman, Tyler McDonald, followed by a grand slam off the bat of designated hitter John Brogan.

The six-run lead proved to be more than enough for Millersville starter Chris Murphy, who threw a complete game one-hitter against the Rams.

Millersville kept that momentum going to start the second game by scoring a run in the top of the first inning to take an early lead. West Chester answered back with a run in both the third and fourth.

The game was knotted up at four a piece going into the seventh inning. West Chester left fielder Tyler Coleman led off the frame with a single to the right side. After a fielder’s choice throwing error by Millersville, right fielder Robert Knox legged out a bunt single, resulting in a no-out, bases loaded situation for the Rams.

Sophomore catcher Bill Ford drew the bases loaded, RBI walk, giving the Rams their first PSAC win of the season. Nick Stallings was credited with the win for the Rams.

The following day, West Chester was able to keep the first game close, but was never able to overcome the 2-0 deficit they surrendered in the bottom of the first inning. They went on to win the second game 6-2.

With those two splits, the Rams sit in a tie for fourth place in the PSAC east, with a 2-2 conference record and a 4-5 overall record. Having played so few games at this point in the season is rare, and puts West Chester behind the eight ball compared to some other teams in the conference.

The Golden Rams started their 2015 campaign with five games in Florida over spring break. They were unable to play any games prior to their Florida trip due to the brutal weather this winter in West Chester, rendering Serpico Stadium unplayable prior to this past week. In fact, they were not even able to practice on their field prior to their trip to Florida.

The highlight of spring training came in their final day in Clearwater, Florida, when they took on the number one ranked team in the country, the University of Tampa. Tampa made headlines a couple of weeks ago for beating the Philadelphia Phillies 6-2 in an early spring training game for the Phils.

West Chester had a 6-4 lead before allowing Tampa to tie the game with two runs in the top of the sixth inning. The Rams answered right back, plating a run in the bottom of the sixth to take a 7-6 lead. Sophomore right-hander Andrew Gernert came in and shut the door allowing no hits in the final three innings, striking out five and walking two, to earn the save.

Coach Prachniak was happy with the win over the top ranked team in the land, but does not want it to come as a surprise to his players.

“I do want that to be the expectation of our guys,” Prachniak said. “On any given day we can beat anyone in the country.”

West Chester is set to have two back to back double-headers against Kutztown University at Serpico Stadium on Monday and Tuesday, March 23, and 24, provided the field is playable. On both days game one will start at 1 p.m., immediately followed by game two.