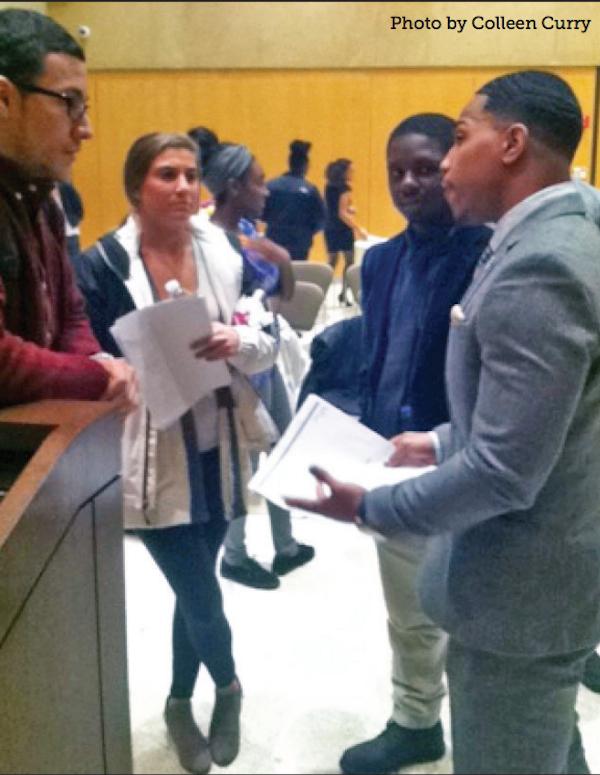 Communication studies students filled Sykes Ballroom A on Wednesday night as they sat ready to listen and learn from guest speakers Melissa Rudolph and Courtland Bragg.

Lindsay Perry, S.I.C. president said, “It’s important for S.I.C. to host events like this so that our members can see how far a communication studies degree can really go. Most people think that a comm. degree means you have to pursue a career in either advertising/PR or television/radio and that is definitely not the case.”

In addition to Rudolph and Bragg, Lauren List, a graduate of WCU who works at Kistler Tiffany Benefits, and Randi Martin, the owner of Trilogy Event Design, were the scheduled speakers for the event, but List and Martin had to drop out at the last minute.

Bragg, a 2014 WCU graduate and now a production assistant at NFL Films, started the presentations.  He shared with students that his journey started with him not getting hired for the NFL Films internship.  After this happened, he was determined to get involved in so much on campus that “they could not deny” him the next year. Bragg joined a bunch of campus organizations such as WCU Weekly and WCUR, along with playing football for WCU.

The next year that Bragg applied for the NFL Films internship, he got it. Now he works full time for NFL Films. He described his day-to-day life to students, explaining that the beginning of the week is spent on a specific assignment: editing, researching, and writing. Bragg explained that he mostly works with “NFL.com, highlight packages for NFL Playbook and Gameday First, and writing scripts for featured segments.”

When asked by a student in the crowd, “When did you realize you had made it?” Bragg shared that the he was watching HBO Hardknocks one night in bed. While watching it he saw that they had used his material. “Oh my God! That’s mine!” was his reaction. At the end, his name was in the credits and that is when Bragg thought, “I made it.” He said it was “really cool” to see his hard work finally pay off.

After Bragg shared his story, Rudolph talked about her career path. Rudolph graduated from Penn State with a communication studies degree and is now part of the WCU Public Relations and Marketing department. She is in charge of all of WCU’s social media and online presence.

Rudolph described her career journey as “much different” than Courtland’s. Her first job after college was as an account executive at a post product house.  She did not like it and ended up at WCU as an intern. In her first months at WCU, she “took it upon herself to create an entire marketing plan” on how to get students to sign up for the new mass alert system, at the time called E2 Campus, which is now WCU Alerts.

[pullquote align=”center”]Rudolph told students that they are “so used to rules” but in your “real job you should be able to think outside the box and be creative.[/pullquote]

After her successful marketing plan, Rudolph was told to create a job description and title that she could be doing at WCU and was then given a full-time position. After a few more years, her current position in the Public Relations and Marketing department opened up.

Rudolph told students that they are “so used to rules” but in your “real job you should be able to think outside the box and be creative.”

The event was a chance for communication studies students to learn more about the options they can pursue with their degrees as well as get advice from people who have been in their shoes.

Perry hopes that if students took anything away from the night it “was the advice the professionals gave about never giving up and staying determined to get to where you want to be.”

Colleen Curry is a fourth-year student majoring in communication studies. She can be reached at CC763513@wcupa.edu.