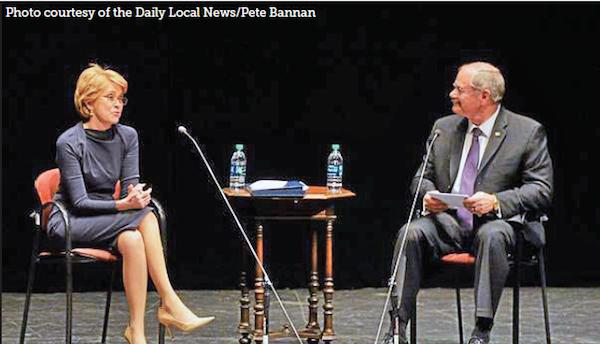 Older age no longer is synonymous with retirement; it is now a time to rebuild yourself and find a new passion in life, as evealed by Jane Pauley on March 6.

Pauley, now on what she calls the second half of her adult life, travelled to West Chester University to speak about her newest passion: helping people realize their new life calling.

For over 30 years, Pauley has been involved in the broadcast business as a cohost on the Today show, an anchor on Dateline, and host of The Jane Pauley Show. In addition, she is the author of the bestselling memoir “Skywriting: A Life Out of the Blue” and bestselling novel “Your Life Calling: Reimagining the Rest of Your Life.”

“Seven months after The Jane Pauley Show ended, I waited for the phone to ring–as it always had. It didn’t. It took me years before I made my move. I pitched my idea of rebuilding life after 50,” Pauley said. And so began her journey of beginning a new project in life for herself, and for others.

Her experience in television was obvious and natural, she stole the stage immediately and engaged the audience as though they were an old friend. “When I was little I gave myself a pretend name: Jizelle,” she joked with the audience, “I don’t know why people laugh when I say that.”

Without notes, she effortlessly told an entire story in full circle creating within two hours a complete personality and background. It takes time to realize it isn’t just you and Pauley having a conversation–she is really that personable.

Pauley wrote Your Life Calling: Reimagining the Rest of Your Life based on 37 individual stories of people who began a reinvention of their lives. One of her favorite stories was of Ken Woods, a man who had made a living from drilling wells. He had thought of being a doctor who would save lives, but due to financial restrictions, he settled on being a well driller the first half of his adult life.

Woods had two heart attacks during his career, and was looking forward to retirement. He put a drilling rig on sale, and a group of church people were interested in purchasing it. They were going to South Africa to drill fresh wells for people in Ghana. They asked if Woods would like to join, and he did after consideration.

“He went back again and again and again on his own. He may be there right now. He’s drilled over a thousand fresh water wells. He saved well over tens and thousands of lives. More than if he had went to medical school. Totally serendipitous,” said Pauley.

According to Pauley, older age no longer sounds, looks, or acts like it used to. Those who are living robust lives at age 90 may be exceptional today, but will soon become the norm. Scientists believe that the first person to see the age of 150 has already been born. Pauley believes that 50 is only half way to the finish line today.

Older is younger than it used to be, Pauley told the audience. In a survey, baby boomers were asked to name the age that begins old age. They picked a number that exceeded their life expectancy by two years. “So I guess death is the new old age,” Pauley said.

Rebuilding your life requires the need for change. Change comes unexpected, unbidden, and sometimes unwelcome, said Pauley. She asked the audience to think of their favorite character in a novel who is repeatedly thwarted with obstacles before they reach their inevitable happy ending. This is how they learn and grow, and that is how everyone does, she said. [pullquote align=”center”]I pitched my idea of rebuilding life after 50,” Pauley said. And so began her journey of beginning a new project in life for herself, and for others.[/pullquote]

Reinvention doesn’t have to be a new career, it can just be a new perspective on life. Inspiration is everywhere, it is just a matter of finding it.

President Weisenstein asked Pauley what she thought would become of broadcast television with the rise of social media. She believed morning television would survive due to the routine of waking up and turning on the television to catch up on what happened while one slept. But, she recognized the rise of social media: “[It] is producing it’s own journalism. There will be opportunities that I can’t imagine [for upcoming journalists]. They’re going to find a way to get the story to an audience, but I might not know just how.”

At age 64, Pauley is as successful as she has ever been. With an entire broadcast television career behind her, and the recent publications of her two best selling books, she continues to stride in the productive path of her youth, but with a new passion.

“I’m not thinking of retiring. Retirement is not like it used to be. We’re redefining retirement. Look at those exit signs; that is what retirement used to be: a way out. Now it’s more like a swinging door where you move from one thing onto something else,” said Pauley.

Colleen Cummings is a fourth year student majoring in English . She can be reached at CC763510@wcupa.edu.