Golden Rams’ season comes to an end in PSAC Quarterfinals 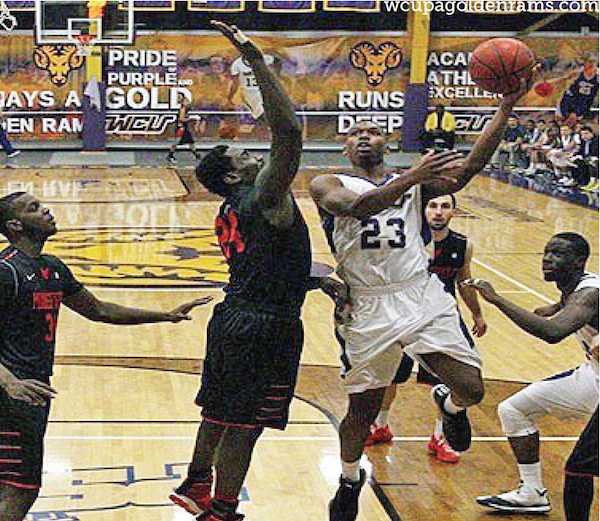 It is always hard to beat a good team three times in one season, and West Chester was unable to complete the sweep.

Kutztown defeated West Chester in the quarterfinals of the PSAC Tournament on Mar 3 in overtime to move on to the semi-finals.

West Chester defeated Kutztown twice earlier on in the regular season, but Kutztown got the best of West Chester when it counted most during post-season play.

Three Kutztown  Golden Bears were in double-figures. Tynell Fortune led the way with 23 points, which also included a game-tying field goal with five seconds remaining in regulation. West Chester also had three players in double-figures, with Cory Blake leading the team with 19 points. Blake had a chance at the end of regulation  to put the game away. Unfortunatley, the senior was off the mark on his jump shot, as he was defended well, and the game went into overtime.

In overtime, it was just too much to handle for the Golden Rams, as Fortune and company simply outplayed West Chester in the extra period.

West Chester will have a long time to think about this loss, as it did end their season. They will have to regroup, as they have lost two key players in their offense, Cory Blake and Eric Frans, both seniors. They are going to have to look towards Matt Wiseley and Parrish Grant to really step their games up and help this team on the offensive end.

Losing two scorers that average over 25 points combined is not going to be easy to replace. Wiseley, their defensive anchor, will have to find a way to get open and get to the basket. Mike Wilson, the three-point specialist off the bench for coach Blair, will also have to be key in the offensive regroup next season.

The Golden Rams finished 16-13 on the season, as it was a season of ups and downs, as they really had to test their guts as team. The team went through some really tough stretches, but they also showed signs of brillance at times during the season.

Next season, will be tough at times as well but this will be a good learning moment for the guys that are coming back.