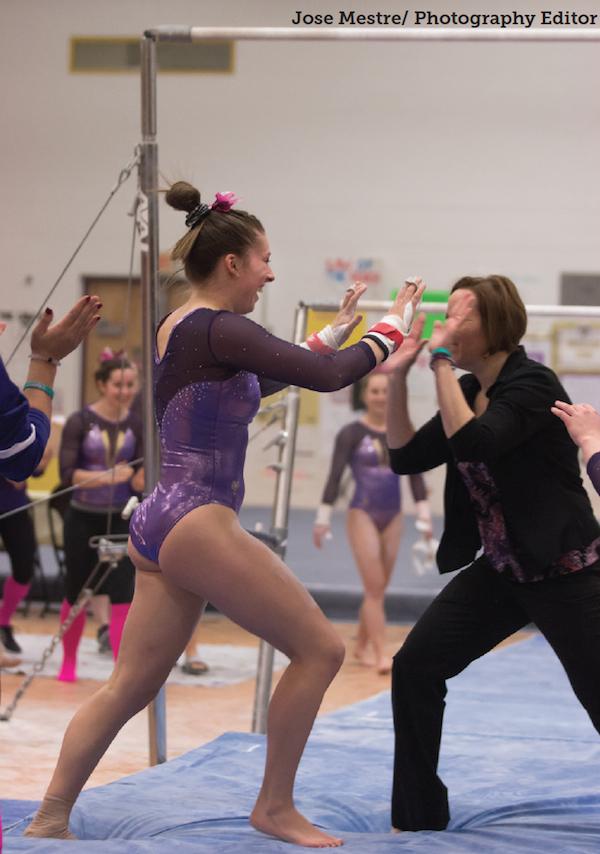 West Chester University’s Women’s Gymnastics squad swept a tri-meet with Southern Connecticut State University and Ursinus College Friday February 27, as part of the Pink Invitational for their annual Unite for HER meet at the Philadelphia Convention Center.

Unite for HER and AJS Pancott Gymnastics NTC hosted its Seventh Annual Pink Invitational-Gymnasts Unite event to raise funds and awareness for women affected by breast cancer.  It is a registered 501 (c) (3) nonprofit organization dedicated to making a positive difference in the lives of women and girls by supporting and providing wellness and breast cancer programs that educate, empower, and restore.  UFH’s founder is West Chester Alumni Sue Weldon.  She has done an excellent job with the organization that now helps over 1,000 women in the Philadelphia area battling breast cancer.

Majesta Valentine, a sophomore from Wilmington, Delaware, scored a 38.775 in the all-around competition, tying her own school record in that event.  Valentine also posted scores above 9.7 in three of the four events.

The Lady Rams started out the competition strong on the vault.  All five counting scores in the line-up were above the 9.5 mark.  Valentine led the Rams with an outstanding 9.775 performance.  Behind her, sophomore teammate Samantha Engle stuck her vault posting a 9.7 and placing second on that event.  Teammates Rachel Blair and Selena Swanger tied on the event both vaulting to a well-deserved 9.575.  Senior Melissa Prisco, of Old Bridge, New Jersey, performed a strong 9.5 vault.

The WCU gymnastics team then moved over to the uneven bars where the Rams continue to show depth and strength.  Valentine and junior teammate Alyssa Hult led the girls on the event, both swinging their way to a 9.525.  Sophomore teammate Katelyn Roland also had a strong performance, posting a 9.4 on the event.  Despite tough judging, the girls remained confident and headed to the balance beam apparatus.

The Golden Rams had a knock out performance as a team on the balance beam.  Again, Valentine led the Rams with an elegant 9.7 performance.  Behind Valentine, senior teammate Cassandra Ringer had a strong performance, posting a 9.6 and placing second on that event.  Not far behind Ringer, Blair and Swanger also had outstanding routines, posting scores of 9.525 and 9.575, respectively.

WCU’s success carried on to the floor exercise, the last event of the evening.  Once again, Valentine led the Golden Rams with an outstanding 9.775 performance.  Behind Valentine, Blair and junior teammate Lindsay Knapp tumbled their way to a 9.575 and 9.525 respectively.

West Chester started their meet on the vault posting a strong 48.125 team score for the event.  Majesta Valentine won the event with a powerful 9.725 vault.  Behind Valentine, sophomore teammates Samantha Engle and Selena Swanger also had strong performances ,both scoring a 9.65.  Senior teammate Mel Prisco wasn’t far behind with an outstanding 9.575 vault as her final performance inside Sturzebecker Health Science Center.  Freshman Rose Wortman rounded out the Ram’s line-up with a beautiful 9.525 performance.

The team carried their success over to the uneven bars.  Junior anchor Meghan Brannon, of Seminole, Florida, led the Rams and also took the top spot on the event by swinging her way to a well-deserved 9.725.  Finishing in second behind Brannon, junior teammate Alyssa Hult had an outstanding 9.675 performance.  Valentine also had a standout performance posting a 9.60.  Behind Valentine, junior Lindsay Knapp hit a solid routine for the Rams in the leadoff spot scoring a 9.45.

WCU gymnastics had a strong start on the balance beam apparatus.  Junior Cecelia Lorenzen, of Windsor, Pennsylvania, led the team off with a gorgeous 9.475 performance.  Leading the Rams and tying for first on the event, Valentine once again had a beautiful performance on the event with a 9.7.  Close behind Valentine, freshman Rachel Blair, had a solid 9.55 performance.

Finishing out the afternoon competition, the Golden Rams headed to the floor exercise where the team has excelled all year.  Tying the school record and winning the event, Valentine tumbled her way to a well-deserved 9.875.  Teammate Hult finished third in the floor standings with her huge 9.75 performance.  Not far behind, freshman Blair posted a 9.725.

In the all-around competition, Valentine smashed her own school record with a 38.900, which outdid her 38.775 set earlier this season.  Sophomore teammate Selena Swanger took the second spot with a 36.725.

At the conclusion of the meet, West Chester Gymnastics recognized their three graduating seniors: Lauren Bilenki, Melissa Prisco, and Cassandra Ringer.  Each serving as co-captain of the Lady Rams gymnastics team, the seniors have left a lasting mark on the team with all of their accomplishments and dedication to the sport.  They will be greatly missed.

West Chester University Gymnastics team (9-10) rounded out their 2015 season this weekend at the 2015 ECAC Division II Women’s Gymnastics Championships against Southern Connecticut State University and the University of Bridgeport, hoping to add a final bright spot in a rather up and down season for the Lady Rams.