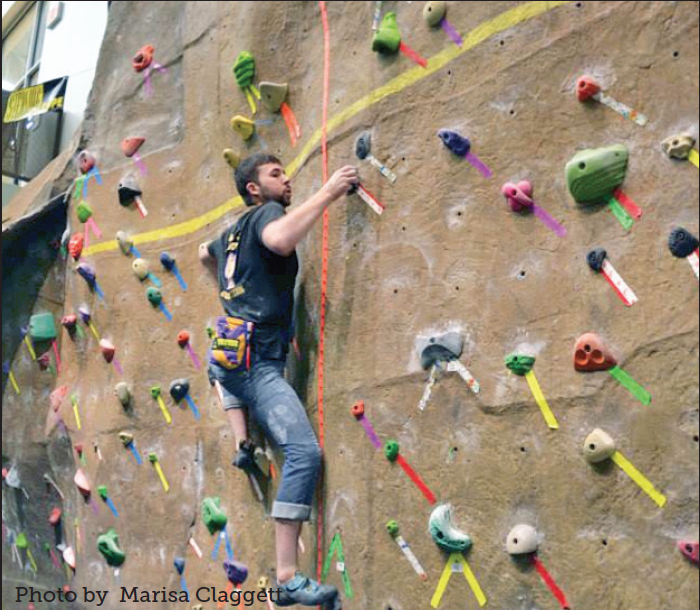 Watching and competing in sports competitions is an American pass time.  There is no doubt that they play an enormous role in college life as well.  Rock climbing, one of the more untraditional university sports, has long been popular in the Philadelphia area, making its way from the outdoors onto campuses and into the passions of numerous college students.

On Saturday, Jan. 31, those passionate climbers competed in and supported ‘Golden Rampage,’ the 4th Event in the PCCS bouldering series, at West Chester University’s own rock climbing wall.

PCCS, the Philadelphia Collegiate Climbing Series, brings together college students from the Philadelphia area to compete in a bouldering competition, in order to win prizes and conquer personal physical and mental expectations.  Bouldering, which requires a concentrated form of strength and technique, is climbing without the use of harnesses or ropes, and employs mats to prevent injuries.

73 Climbers from six different schools, including West Chester, competed in categories of beginner, intermediate, and advanced, determined by the difficulty of movements and holds.

In the midst of dusty clouds of cinnamon- scented climbing chalk and engrossed climbers screaming off beta, the unbridled psyche of competitors, staff, and spectators set the mood for what was an exciting and eventful day of climbing, competition, laughter, and fellowship.

Each and every participant had the support of one another, illustrated by the roaring cheers when someone stuck the finish and moans of disappointment when they fell to the mat.  Whether one had just started climbing that day or had been climbing for five years, everyone recognized and celebrated the personal victories, whether their own or others.

There were 1st, 2nd, and 3rd winners in each category, with West Chester climbers winning in each division.

The advanced category consisted of a collection of the top five men and top five women with the highest scores.  They competed in a men and women’s finals boulder problem, set to challenge even the most skilled of climbers.  After an intense waiting period in which staff set the predetermined boulders, 10 incredibly talented men and women attempted the routes while everyone looked on in anticipation.  After several attempts, the climbers that made it furthest on the route without falling were awarded their respective points and ranked.

West Chester’s own Drew Zedosky and Kelsey Tennett, both also members of the climbing wall staff, placed 2nd in the advanced men and women’s categories, an achievement well-deserved of the athletes.  Mike Cunningham from Drexel and Grace Icenogle from Temple, each of them elite climbers, won 1st place in the advanced categories.

Although not everyone could win, every participating climber performed remarkably, regardless of experience.  Moreover, the West Chester rock wall staff deserves recognition for their tireless effort in preparing the wall and planning the event.  Golden rampage was truly a community triumph.

With the fourth event of the bouldering series accomplished, there still awaits 2 PCCS events over the course of the rest of the semester.  The next bouldering event was held at Drexel University’s climbing wall February 21, while the last competition will be held at Elite climbing gym in Maple Shade, New Jersey on April 11.

When there is so much to gain from the experience of pushing the boundaries of expectations and supporting the collegiate climbing community, all West Chester rams interested in climbing, competing, or just meeting new, amazing people should consider coming out to the next competition.

Marisa Claggett is a second-year student majoring in political science. She can be reached at MC808919@wcupa.edu.