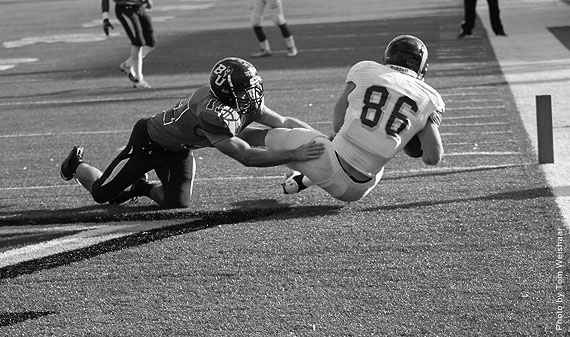 West Chester University dropped their first regular season game of the year this past Saturday in a 41-10 loss against archrival Bloomsburg University.

A slow start plagued West Chester and the Golden Rams could never find their stride. The Huskies were dominant in almost every aspect of the game, virtually doing whatever they wanted. For the Golden Rams, the exact opposite occurred. No offense could be mustered, and the defense struggled to make a big play all game. Saturday’s loss will certainly be a wake-up call in preparing for the rest of the season.

Senior quarterback Sean McCartney had been everything and more that West Chester could have hoped for this year. Saturday, McCartney struggled from the first snap, and continuously through the day. The quarterback, who has been the spark for this high-power offense all year, threw for 170 yards (a season low) and one touchdown (a season low), on 22-42 passing. McCartney also threw four interceptions, a career high, in the loss. After being nearly perfect thus far throughout the season, McCartney just could not find it this week.

The Rams’ rushing attack was silenced as well. Brandon Monk carried the ball 14 times, but could only tally 64 yards. By his side, Eddie Elliot ran for 62 yards on 12 carries. Neither found the end zone on Saturday afternoon. Whether it was the heavy blitzing linebackers of the Huskies or the strong defensesive line play,  West Chester’s rushing attack struggled to make big plays all day.

Because of a quiet day for McCartney, the West Chester receiving core did not see much action. Tim Brown, Brandon Monk, and Shannon Mayer led the Golden Rams with four catches each. Brown scored the Rams’ lone touchdown on a pass from McCartney late in the third quarter, providing WCU with their only touchdown on the day. Brown finished with four catches, 53 yards and the touchdown.

One way to beat a good defense like the Golden Rams is to keep them on the field as long, and as much, as possible. Bloomsburg certainly entered the contest looking to do that, and it paid off.  The Golden Rams’ offense turned the ball over a season-high six times, which led to 24 Bloomsburg points. One thing about the Rams all season has been they have won the turnover battle in every game, but not this week.

The West Chester defense could not find an answer for the rushing combination of Bloomsburg running backs Eddie Mateo and Dai’Shon Munger. Mateo ran for a career-high 269 yards and four touchdowns, while Munger added 143 yards on just 13 carries. The dynamic duo of the Bloomsburg backfield completely dominated the game. Three of Mateo’s four touchdowns came in the first half, along with 160 of his yards. From the first whistle, Mateo let the floodgates open and ran the ball straight down the Golden Rams’ throats.

The Golden Ram defense had trouble consistently throughout the game stopping the Bloomsburg offense. Graduate student Cory Scott and All-American Ronell Williams led the Rams with eight tackles each. Williams is still recovering to full ability after suffering a tough injury, but does seem to have his feet under him again. Scott, a D-I transfer student, has added another strong defensive back to an already solid core for the Rams. Four other players grabbed six tackles apiece for the Rams, but the defense just could not stop Mateo.

The loss will certainly have a role in the upcoming rankings for D-II. Previous to Saturday, West Chester sat at No. 7 in the country, while Bloomsburg trailed right behind at No. 8. With this loss, West Chester will move back behind Bloomsburg in the national rankings.

Last season, when Bloomsburg gave West Chester their only regular-season loss, WCU was lucky enough to meet them again in the playoffs. After being defeated 31-28 during the regular season, the Rams beat the Huskies when it counted, winning 40-38 in the second round of the NCAA D-II tournament. A possible rematch will certainly not be counted out between the two dominant PSAC teams.

Up next, the Golden Rams will take on Cheyney University at home, next Saturday at noon. Cheyney has struggled all season, holding a 0-8 record so far. Looking even further ahead, the Rams will head to East Stroudsburg the following week for another big PSAC matchup. ESU presents a strong opponent, and a great game to prepare the Rams for the upcoming playoffs.

After a sloppy weekend, the Rams will hit the practice field and figure out what went wrong. This team is not done, nor should they be counted out. One tough loss can serve as motivation to get better, and perhaps a spark the Rams can use to drive the rest of their season. With just three regular season games left before playoffs roll around, a late season push will be in effect. Be prepared to see McCartney, Brown, Monk, and company reboot their high powered offense, along with Williams and  fellow All-American Al-Hajj Shabazz leading the defense back to Golden Ram football.  Hopefully the Rams will bounce back, stronger than ever, and climb their way back to the top of the PSAC, in search of a PSAC championship.

AJ Arcaini is a third-year student majoring in communication studies with a minor in journalism. He can be reached at AA788494@wcupa.edu.You can follow him on twitter @A_J_8.