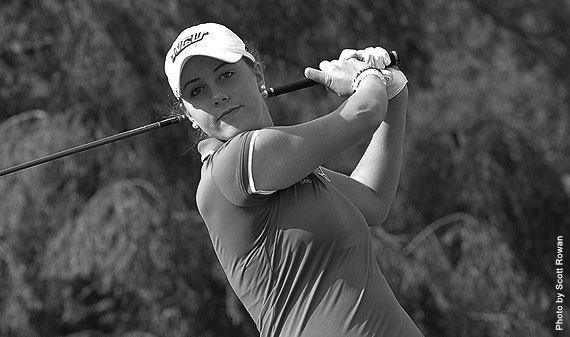 The fall season officially came to a close last weekend in Hershey, Pa. for the women’s golf team. The Lady Rams finished in sixth place at the PSAC Championships at Hershey Links Course on Sunday afternoon.  The team shot a total of 664 for the two-day tournament. On Saturday, the team posted a score of 333, and on Sunday the Lady Rams improved by two strokes, carding a 331 for the day.

Freshman Lacey Bensing had an incredible end to her fall season. A few weeks ago at Kutztown, she placed second individually, just one stroke off the leader. She admitted, “Being so close to winning is hard to be content with, but there were many positives that came from the weekend.” This past weekend, Bensing carded a 157 for the tournament, which was enough to place second on the individual leaderboard. She was very close to winning again, but realized she has three more chances at a PSAC individual title. Bensing has remained consistent during her last few tournaments, which shows a bright collegiate future for the freshman. Her goal for the PSAC Championships was to shoot in the 70s and she did just that on both days of competition. Bensing posted two solid scores in Hershey, with a 79 on Saturday and a 78 on Sunday. For the second week in a row, she was the only Ram to shoot under 80. Bensing is looking forward to next season, and hoping to take home an individual title that she has come so close to winning two times this season.

Senior captain Gabby Couture had a great PSAC Championship Tournament last fall, but was not thrilled with her final performance in Hershey. Last year she carded a 159, which placed her fifth overall. This past weekend, Couture carded a 170 for her final PSAC tournament.  “I wasn’t very happy with the way I played, but I was proud of the rest of the girls for playing well despite the conditions.” The Lady Rams did indeed post solid scores considering the 30 mph winds they were faced with. Couture stated, “It was definitely a challenge, but we all did our best to maintain our focus and try to post some good scores.” Couture ended up carding a 170 for the tournament, while Katie Clark and Taylor Daskivich carded a 171 each. Freshman Lauren Molin shot a 174, which placed her 30th overall.

The Lady Rams wished to place better than they did last year in Hershey, but they ended up in sixth place again. Couture stated that the number they placed on the leaderboard does not exactly measure the amount of effort and improvements that were made this season. She added, “Each girl worked so hard on their individual games this season. Although we didn’t place better than last year, we still have a lot of positives to take with us to the spring season. And, I have no doubt that these girls will post some great scores next year at PSACs and the years to come.” Couture has paved the way for her fellow Lady Rams throughout this season. Sophomore Taylor Daskivich has the utmost respect for her team captain stating, “Gabby is an amazing team leader on and off the course. She did a great job getting to know the freshmen, and made it easy for them to feel comfortable in their first collegiate season.” Couture has had a positive impact on her team, and will continue to do so in her final season as a Ram. The women’s golf team is looking to improve more over their winter break so that they can add a few wins to the book. Congratulations to the Lady Rams on their amazing fall season!

Jenna Hopkins can be reached at JH758665@wcupa.edu. You can follower her on twitter @jh0ps.