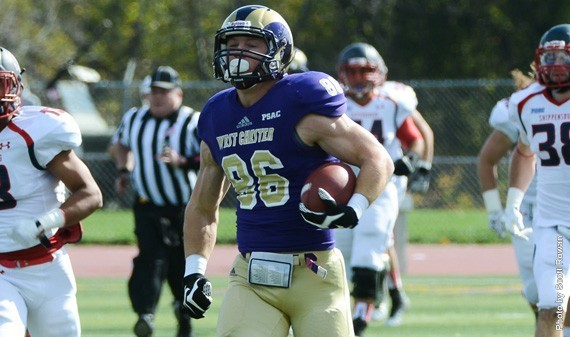 The West Chester University football team is back and has not lost a stride. Shippensburg University was the challenge for the Golden Rams on homecoming afternoon in front of a packed crowd at John A. Farrell Stadium. The Golden Rams saught to continue their on-going win streak and improve to 7-0.

The Golden Rams took the field with extreme intensity against a strong Shippensburg team, one of their strongest opponents yet this season. Despite their 3-3 record, Shippensburg has shown glimpses of greatness this season, which West Chester looked to cancel out. With a chance to show their dominance in the PSAC, West Chester accepted the challenge and defeated the Red Raiders 55-28.

Senior quarterback Sean McCartney has shown his talents week in and week out for the Golden Rams, becoming one of the most skilled quarterbacks in the PSAC. This week was no different, as McCartney had his way with the Shippensburg defense all afternoon. McCartney threw for 395 yards going 17-29 with five touchdown passes. Completing passes to seven different receivers, McCartney could not be stopped.

The Golden Rams rushing attack was distributed to three main running backs, the usual Brandon Monk and Eddie Elliot, but Jarel Elder ended the game for the Rams with a late score from six yards out. Elder finished with 41 yards on 10 carries and a touchdown.

The Golden Rams’ receiver connection with McCartney was on display in full force. Tight end Tim Brown has played excellent all year; Saturday afternoon, he was unstoppable. Brown caught four passes for a whopping 143 yards, one being a 90-yard touchdown catch on the first play of the game. Brown found the end zone again in the first quarter on a 21-yard touchdown pass from McCartney. Brown has been one of McCartney’s most reliable target through the season so far. Posting a team-high eight touchdowns on the season, Brown has stormed the PSAC and taken control as one of the top targets in the conference.

Erick Brundidge only caught two passes on Saturday afternoon, which is a quiet day compared to his usual stat line, but one of those two catches came on the first play of the second half. McCartney hit Brundidge for a 48-yard TD score for his seventh touchdown of the year. Along with Brundidge, Mike Doty also caught a touchdown pass from McCartney.

Doty finished with three catches for 48 yards and a score from 21 yards out. The Rams’ receiving core has been unstoppable through the first seven games, and shows no sign of fault.

On the defensive side of the ball, the heavily awaited return of senior All-American linebacker Ronell Williams came at no better time. Williams performed to full potential in front of the homecoming crowd, grabbing seven total tackles and one sack.

The defensive back core for WCU had a somewhat quiet game, but did not allow Zapoticky’s recievers much room to breath. Defensive back Drew Formica led all Golden Rams’ DB’s with six tackles. Formica has dominated in his position for the WCU defense, a position that was roamed by ex-Ram Sean Krautzel, an outstanding player for the 2013 Rams’ defense.

Although the Red Raiders’ offense received an extremely strong game from running back Blair Brooks who carried the ball 18 times for an impressive 174 yards, the West Chester defense came up big when it needed to, and the late Shippensburg push was just not enough.

As the season continues, the Rams’ schedule only gets tougher. Next up for West Chester is Bloomsburg University. The Golden Rams’ only regular season loss came to Bloomsburg last season in a 28-31 defeat in the PSAC semifinals, a game many Golden Rams’ faithful will remember for years to come.

Although the Huskies still have an extremely powerful offense, one big piece from last year will not be in attendance this time around.

Last year, fans got to witness one of the best PSAC running back matchups in recent history, when ex-Golden Ram running back Rondell White faced off against ex-Husky running back Franklyn Quiteh. Fortunately, Quiteh will not be taking the field after graduating last year. Quiteh was the cornerstone of the 2013 Bloomsburg offense, along with winning the Harlon Hill award, which is like the division II Heisman. Quiteh rushed for an astonishing 2,195 yards and 25 touchdowns.

The matchup of the upcoming week will be a chance for vengeance for West Chester, after being knocked out of PSAC playoffs last year by Bloomsburg. Both teams enter the game 7-0, being the powerhouses of the PSAC East. This matchup will certainly be one to watch and possibly the most exciting game of the regular season for the Rams.

A successful homecoming weekend is exactly what the Golden Rams wanted entering such a big week. With McCartney and his band of offensive brothers rolling, along with the anticipated return of senior LB Williams, the Golden Rams seem to have the chips falling into place for what will be a shootout of top PSAC teams.