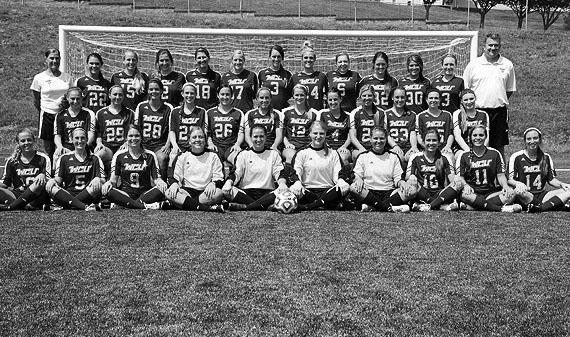 Two more games for the Golden Rams’ women’s soccer team, and two more shutout victories for the No.11 team in the country.

West Chester defeated Shippensburg on the road 1-0 on Tuesday. The lone goal came from Carly Yost in the 88th minute. This was Yost’s fifth goal of the season, which is tops on the team. She also leads the team in assists and points. The game was close throughout, with West Chester holding the advantage in most categories. West Chester led in shots, 11-8, and corner kicks, 6-1. Dana Hunt and Kara Parvel also had shots on goal, which were saved by Shippensburg’s goalkeeper Kayla Kennedy who had five saves. West Chester goalkeeper Alex Srolis recorded her eighth shutout of the season. Along with the help from Sara Bennis, Erika Shrock, and Carly Henry, it is very hard to score on this Golden Ram team. They have only allowed five goals all season, and only one game did they allow more than one.

West Chester then went back home to take on Millersville on Saturday, which was homecoming. The lady Rams put on a good show for the fans that were there to watch, as they defeated Millersville 2-0. Again it was another shutout for Srolis and that defense. The offense came from, yet again, Carly Yost. She recorded her sixth goal in the 84th minute off of an assist from Kara Parvel. Parvel also scored in the game, and her goal was the one that put West Chester ahead 1-0 in the contest. Parvel’s goal came in the 71st minute off an assist from Nikki Lynch. This was Parvel’s fourth goal of the season. She is second in all scoring categories, including shots, assists and points, behind Yost.

West Chester has four more games remaining in the regular season. They will take on University of Pitt-Johnstown, Seton Hill, California University of Pennsylvania and Slipperry Rock to close out the season. Three of the final four are at home, and they are all afternoon games. West Chester has a good chance to be able to close out the season in style with four more wins, which would put them at 16-1 for the season. Right now they stand at 12-1, No.11 in the national polls. As for now they will focus on playing one game at a time and will prepare for the University of Pitt-Johnstown. This game will take place at home on Wednesday, Oct. 22, at 3:30 p.m.