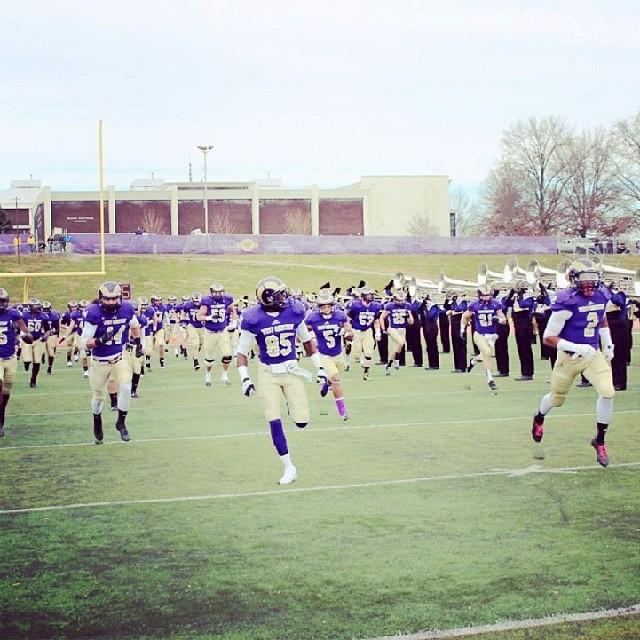 The West Chester Rams are rolling and there is no turning back. With huge wins in the past two weeks over PSAC rivals Lock Haven and Kutztown, it seems that the Rams are in control of the driver’s seat as they fly through the midway point of the season with a 6-0 record.

Looking back in time, the Rams defeated Lock Haven University at home on Oct. 4 by a score of 41-16. The Rams then faced off with Kutztown University in a Thursday night bout held at Kutztown. The Rams again downed a strong team, defensively dominating the Golden Bears and winning by a score of 29-7.

Golden Rams quarterback Sean McCartney is playing out of his mind. McCartney eclipsed 400 yards along with five touchdowns against Lock Haven, providing his team with one of his best games of the season in the blowout win. McCartney kept on rolling straight through the week to Kutztown, where he again threw for over 300 yards and two scores.

Despite the outstanding play of McCartney, the defense stole the spotlight in both of the past games. The Golden Ram’s defense has held their last two opponents to under 400 total yards a piece, an impressive stat in college football.

Defensive back Al-Hajj Shabazz has been dominant over the two game span, posting four tackles and three broken-up passes against Lock Haven, along with four more tackles and a huge interception-turned-touchdown in the Thursday night matchup with Kutztown. Shabazz has been a cornerstone in this defensive back core that features himself along with junior Kevin Malone who has stepped into his role and dominated.

Malone has recorded 10 total tackles in the past two games, but the numbers do not speak to the intensity he has brought to the team. Malone, along with the rest of the defensive unit has brough a swagger out on the field with them and other teams certainly notice it.

Alongside Malone, senior Mike Labor continues to pull the weight for the linebackers, despite the injury to All-American Ronell Williams. Surprisingly, the injury to Williams has not hurt the West Chester defense, if anything, it has provided them with the extra spark they need to continue to get better and work harder. Labor has led this defense to their success, while leading the team in tackles along the way.

Sophomore Shaquil Ryder posted his best game to date, reeling in 10 total tackles along with a sack and fumble recovery. Ryder, alongside Andrew Cohen, has stepped up for the young, yet talented, Rams defensive line.

On the offensive side of the ball, the Rams have truly not shown a weakness. In the first few games of the season, a running game was lacking from West Chester, but not anymore. Brandon Monk has exploded the past two games, rushing for 129 and 134 yards. Monk found the end zone just once per game, but has certainly opened up many more options for McCartney.

Monk’s counterpart Eddie Elliot has not seen as many carries in the past few games, due to the great play of Monk, but has been efficient when the ball is in his hands. Elliot has also played a part in the passing game, catching five balls for over 100 yards in the past two weeks.

As we have seen, McCartney and his receiving core have no limits. The past two weeks have only proved that the sky is truly the limit for this West Chester offense. After posting 600 plus yards on Millersville University a few weeks back, WCU posted 600 plus yards again in their matchup against Lock Haven University.

Shannon Mayer, Tim Brown, and Jim Hurley led the Golden Rams with five catches a piece all for over 60 yards a piece. Mayer found the end zone twice in what was a breakout game for his season and a huge spark as a whole for West Chester University. Brown has been dominant day in and day out for the Golden Rams, and his two touchdowns against Lock Haven continued that streak. Erick Brundidge, who has possibly been McCartney’s most consisten and reliable target all season,  recorded another touchdown against Lock Haven, along with racking up three catches for 82 yards.

Lock Haven proved to have no chance in stopping this Golden Ram offense. No team has figured out the key to stopping the force of McCartney and his core of offensive weapons, and it doesn’t look like it will be an easy task for any team too.

Kutztown took a stab at stopping the Rams, but it did not work out in their favor. Mike Doty posted his best game to date, pulling in seven catches for 107 yards and two scores. Doty has flew somewhat under the radar at times this year, but is certainly a key offensive threat for West Chester University.

McCartney hit nine different receivers in the West Chester win, distributing the ball extremely well. By using this many receivers, McCartney is keeping defensive backs on their heels, opening up a new found run game for Monk, and implementing play action packages that are completely fooling defenses, not knowing where the ball may go.

Monk’s consistent play has opened up opportunities for McCartney in the play action game; along with helping the receivers find more space. He averaged an excellent 6.1 yards per carry in the Kutztown game.

As we approach homecoming weekend, the Rams will prepare for their toughest matchup to date, Shippensburg University. The Red Raiders always put up a fight, so this will be no easy task for West Chester. Along with Shippensburg, the next few weeks on the Rams schedule continue to look tougher as the week goes by. Despite the excellent 6-0 start, the Rams are all about taking this season one game at a time. Anthing more will be looking past their goal.With what is expected to be a huge crowd at John A. Farrell Stadium on Saturday afternoon, the Golden Rams will look to continue this magical season and post yet another win for their home fans.