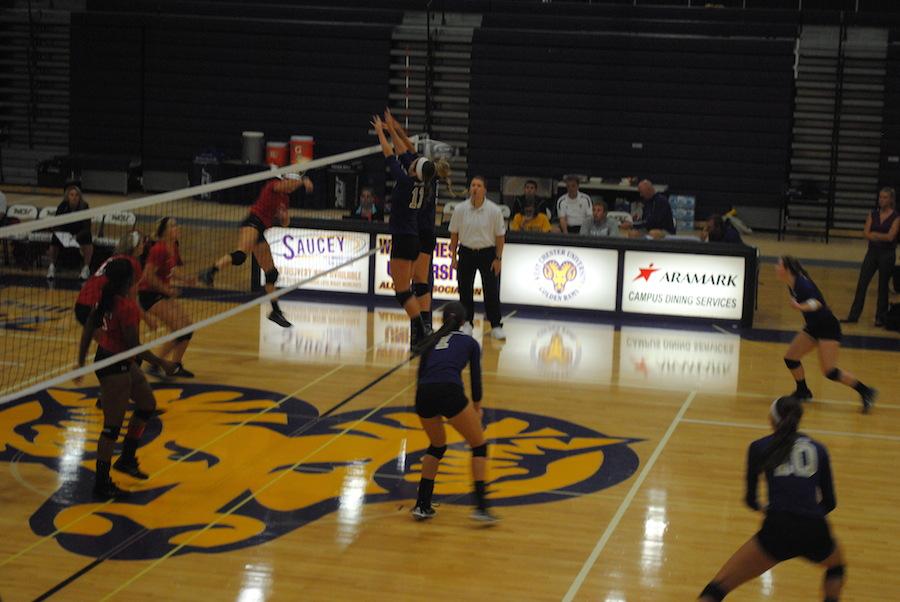 “We knew going in that it would be a competitive weekend,” Coach Bellaver started.  Earlier in the week, the Rams would finish the East Stroudsburg Invitational with only one loss in the four games played at ESU.  The Golden Rams would not have the same positive result when they returned home, hosting the PSAC East Crossover. They would fight through the first three games of the tournament, starting a losing streak of three games.  Bellaver went on to say, “As a team, we did not pass or serve as well as we have been over the past few weeks and this had a direct impact on our hitting percentage.”

West Chester started the competition with a match against Edinboro.  The Fighting Scots are one of only three teams with a hitting percentage above .100 in a match so far this season, posting a .105 percentage for the match. Along with that, the Rams hurt themselves with eight reception errors in the match.

Continuing the competitive weekend with a game against Slippery Rock, the visiting Lions swept the home court Rams. The Lions seemed unstoppable. The Rock made only 12 hitting errors in the match, compared to the five reception errors and seven service errors, resulting in the tough loss. Errors aside, Slippery Rock put up a startling .221 hitting percentage.  Callie Krajcir paced West Chester with 23 digs. Samantha Agostini and Julia O’Brien both put up seven kills in the game against the Lions.

After losing the first two matches of the tournament, WCU set out to face the undefeated Golden Knights. Gannon remained undefeated with a 3-0 sweep over West Chester in a PSAC women’s volleyball contest inside Hollinger Field House Saturday morning. The Lady Rams wouldn’t give it to Gannon easy. They would fight every set, losing the match by scores of 25-22, 25-20, and 25-22. Cara Reese recorded seven kills and three blocks. Macon Frey stepped up registering 16 assists alongside Callie Krajcir’s 20 digs. WCU would be offensively proficient all match with a hitting percentage of .220 and put on defensive show with 47 digs. The strong showing just wasn’t enough to put The Ladies of West Chester on top. When asked what was the key component to the losses this weekend, Bellaver stated, “When we were able to keep the ball in system, our middles did a fantastic job and they also blocked well.  We were strong defensively but could not get our offense running consistently.”

West Chester will prepare for a non-PSAC game with University of the Sciences in Philadelphia on Sept. 23. This match will be a great opportunity for WCU to get some much needed confidence before heading into a 5 game home stand against some very tough PSAC competitors.

“We will work hard this week to get back on track and we are looking forward to the matches against Millersville and Ship next weekend,” added Coach Bellaver.

The Golden Rams will certainly be looking to get back into the groove they were in for the first eight matches this season.

Bryce Livers is a second-year student majoring in communications. He can be reached at BL810873@wcupa.edu