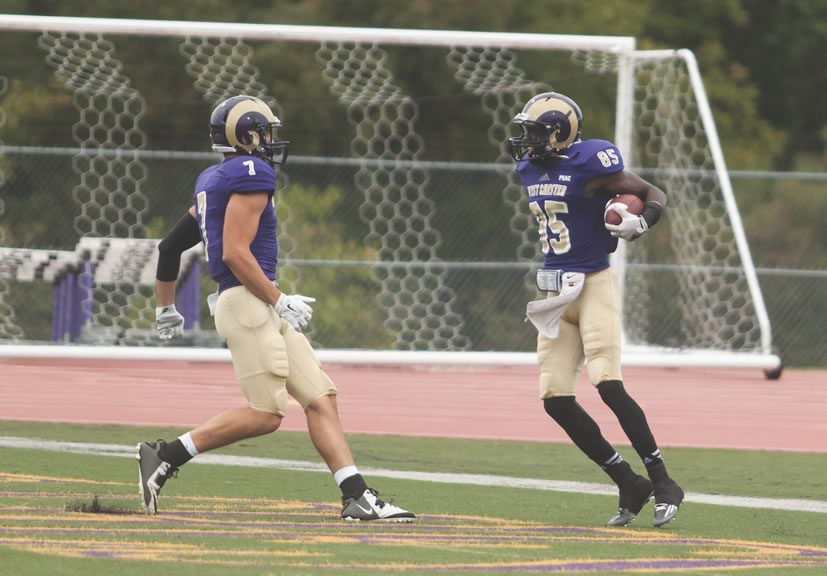 Junior tight end Tim Brown exploded for two touchdowns on five catches and 77 yards from Quarterback Sean McCartney in the 38-14 win Saturday afternoon. McCartney dominated yet again for the Rams, going 23-35 for 305 yards while throwing three touchdowns and adding another score with his legs.

The Rams exploded early, scoring three times in the first 15 minutes. After the early attack, the West Chester defense became a brick wall, virtually shutting down the Mercyhurst offense completely.

Senior wideout Erick Brundidge caught a quick pass from McCartney in the flat early in the first quarter. He then broke through the defensive back core of Mercyhurst, exploding for a 74-yard touchdown. This came after McCartney had already scored on a four-yard run on West Chester’s opening drive.

With the Rams on top 14-0 early, it was time for the defense to shine. Senior All-American linebacker Ronell Williams found a seam in the offensive line and laid a huge hit on Mercyhurst quarterback Zach Emerick. Emerick somehow got the pass off, but not as he planned.

Junior safety Drew Formica made a play on the floating pass from Emerick, intercepting the ball and taking it to the house for a 39-yard interception return. Formica’s touchdown gave the Rams a three touchdown lead just 15 minutes in to the game.

After a Merychurst score, Brown and McCartney turned up the heat, connecting for their first touchdown. This fourth touchdown gave West Chester the lead they would need, and more. Brown and McCartney struck once more again in the fourth, after another Mercyhurst score. A late field goal from kicker Rich Bruno would pad the already large lead for the Rams, and hold a final score of 38-14.

WCU dominated exactly how the crowd had hoped, putting on a show for their home fans.  Junior Adam Dempsey led all West Chester receivers with six catches, tying his career high.

Throughout the beginning of the season we have seen a surplus of different recievers come up big in certain situations for the Golden Rams. Brundidge has carried a lot of the load so far in the first two games,but that does not mean the other recievers have not quietly dominated as well.

Brown has been quite possibly McCartney’s favorite target on the year, connecting with him eight times for 130 yards and three passing touchdowns. Following right up with Brown is Mike Doty and Dempsey, each with eight catches a piece. Doty has added one score while Dempsey is still waiting for that oppurtunity.

In McCartney’s dominant performance he reached seven different recievers throughout the game. Junior RB Brandon Monk led the team with 61 rushing yards, but WCU relied heavy on its passing game.

Despite a somewhat quiet game from a rushing standpoint, Monk and junior Eddie Elliot are certainly causing havoc in other aspects of the game. Monk has been fielding both kickoff returns and punt returns, where he is a force due to his ellusiveness.

Last season we saw Elliot featured often in the offense, just not as a pro-style running back. This season we may continue to see some of the same, with Elliot lining up as a slot reciever or even as afull on wideout. Elliot has certainly shown his talent when catching the ball in the open field, he has four receptions in the two games this season, for almost 50 yards.

On the defensive side of the ball, junior defensive end Andrew Cohen was a dominating force, leading the team with seven tackles including one sack. Williams and fellow linebacker Mike Labor were not far behind with six and seven tackles respectively.

As a unit, West Chester broke up nine passes along with two forced fumbles, while completely shutting down Mercyhurst star running back Brandon Brown-Dukes, holding him only to 39 total yards.

The young defensive line for the Ram’s has showed up powerful through the first two games. Cohen has been the cornerstone in the defensive trenches for WCU, leading the team with two sacks. Cohen has also racked up 10 total tackles in two games, the most of any West Chester defensive lineman.

Next up for the Golden Rams is Seton Hill University. The Griffins enter the game posting a 1-1 record, with a season opening lost to Shippensburg University, but had a follow-up win this past weekend against Lock Haven University.

On the shoulders of McCartney, West Chester will look to build on their so-far dominating season with a week three win. McCartney will continue to use his many lethal targets in his receiving core. along with the rushing attack of Monk and Elliot. Coach Zwaan seems extremely pleased with his team’s performance through the first two games of the season, hopefully the play of the Rams will continue as we have seen.